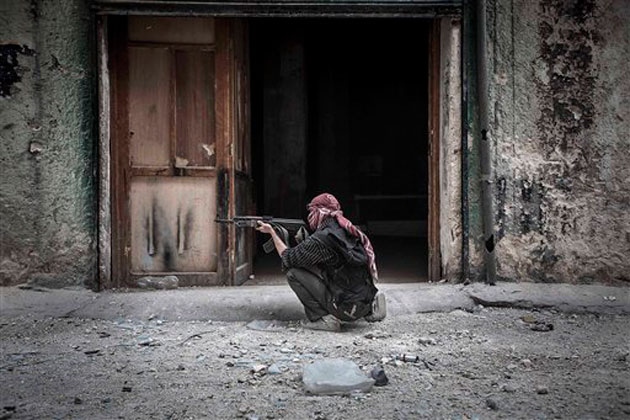 A Free Syrian Army fighter in Syria, where the government and rebel forces have accused each other of using chemical weapons.

Claims by the United States, the United Kingdom and France that the Syrian regime has used chemical weapons against opposition forces appear credible, say independent chemical-weapons experts. But they say that the assertions are difficult to fully assess without much more public details of the provenance and analyses of the data the three governments have relied on.

The White House said on 13 June that the US intelligence community now has "high confidence" that the Syrian regime has used chemical weapons, including sarin, multiple times on a small scale over the past year, killing some 100 to 150 people. The United Kingdom and France reached a similar conclusion earlier this month.

The three governments say that they have relied on witness accounts of when, where and how Syria carried out chemical-weapons attacks, reports of physiological symptoms consistent with exposure to chemical weapons and lab analyses of physiological samples showing exposure to sarin. But the origin and history of blood and urine samples is sometimes unclear, experts say. To be credible evidence in chemical-weapons forensics, sample provenance must be guaranteed by a 'chain of custody'.

"Someone needs to be able to verify that samples were in their custody at all times and nobody interfered with them," says Alastair Hay, a chemical-weapons expert at the University of Leeds, UK, who has worked on analyses of past attacks on Kurdish populations in Iraq. Although he believes that the United States, Britain and France "must feel that they have data of more than reasonable quality", Hay says that he hopes the three nations make public the evidence behind their statements.

So far, no details of the quality of the chain of custody are publicly available, although the countries have passed on classified information from their investigations to an independent United Nations team — led by Swedish scientist Åke Sellström, a former UN weapons inspector. Syria has so far been unwilling to allow the UN team into the country to examine the situation.

In the meantime, the United States has acknowledged that although it has obtained samples from individuals testing positive for exposure to sarin, this does not tell officials "how or where the individuals were exposed or who was responsible for the dissemination". The Syrian regime and rebels have accused each other of using chemical weapons, and being able to rule out use by rebels is important as the US government and other nations consider whether to intervene further in the ongoing conflict.

Eyewitness accounts of chemical-weapons use can be unreliable. Symptoms such as severe respiratory distress can sometimes be misunderstood as being from chemical-weapons exposure, when they might be caused by tear gas or other legal, non-lethal weapons. The symptoms of individuals seen in video footage in some early alleged cases of chemical-weapons attacks in Syria also seemed to some Western medical experts to be more akin to those of chlorine exposure. That might have been due, for example, to the bombing of a factory nearby, says Susannah Sirkin, a senior adviser to Physicians for Human Rights, a US-based body headquartered in Cambridge, Massachusetts, which in 1988 provided the first evidence for Iraq's massacre of Kurdish populations using chemical weapons.

Sirkin says that as a long-standing activist against chemical weapons, she would be the last person to contest the seriousness of their use in Syria. At the same time, some 93,000 people have already died in the Syrian conflict, whereas the United States estimates up to 150 people in Syria have been killed by chemical weapons. There is no doubt that many serious war crimes using conventional weapons have already been committed by the Syrian regime, says Sirkin. "Other possible red lines from a human rights point of view have long been crossed," she says.