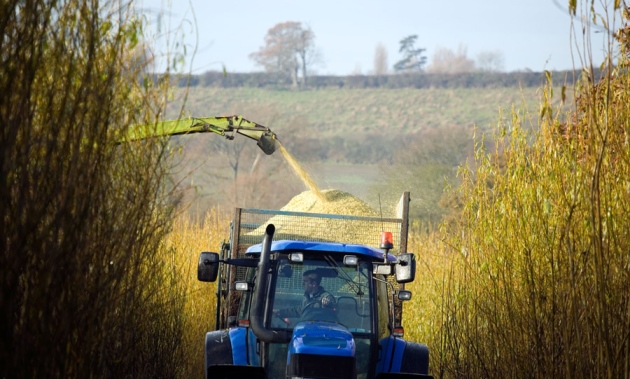 Willow trees are among the crops that are harvested as biomass for use as fuel.

A mild chemical treatment that completely dissolves wood, dried grasses and other indigestible plant matter could greatly improve the efficiency of converting waste biomass to fuel.

Ethanol and other biofuels, including certain petrol and diesel substitutes, can be produced from simple sugars, usually by fermentation. Most of the sugars come from foodstuffs, including sugar cane and maize (corn). But most of the biomass produced in agriculture and forestry lies unused in more-complex chains of sugars, for example lignin and cellulose.

These tough, recalcitrant materials, which provide structural support for wood, grasses and the non-edible parts of crops, are hard to break down. Producers of cellulosic ethanol currently spend 15–20% of their fuel costs on acids and enzymes to loosen and chew up the fibres.

By adding a dash of dilute sulphuric acid to a colourless, herbal-smelling liquid called γ-valerolactone (GVL), chemists from the University of Wisconsin-Madison have now invented a process that they say easily extracts sugars from lignin and cellulose fibres.

“I think there is a great potential for this approach in biomass processing,” says Harvey Blanch, a bioenergy researcher at the Joint BioEnergy Institute in Emeryville, California, who was not involved in the work.

A lab-scale experiment suggests that the solvent might already produce cellulosic ethanol some 10% more cheaply than existing state-of-the-art technology, says Jeremy Luterbacher, part of the team that developed the technology. Other academic and industrial scientists say that the chemical treatment is promising, but that it is too early to tell whether it might save money. Unexpected hurdles could arise as the technology is tested at larger scales, and in the meantime, enzymes are rapidly becoming cheaper: their cost has fallen to one-tenth of that a decade ago, says Mads Torry-Smith, director of biomass applications at enzyme company Novozymes, based in Raleigh-Durham, North Carolina.

But Luterbacher says that his team's enzyme-free process has plenty of potential for improvement. “The point is that we have a new technology that we have been developing for a year, and it’s comparable [in cost] to enzymes that have been in development for decades,” he says. The work is reported today in Science1.

Chemist James Dumesic, who is also part of the Wisconsin-Madison team, has worked with the liquid for years as a potential fuel in its own right, and a University of Wisconsin spin-off firm, Glucan Biorenewables, is already using GVL to make furans, a different kind of biofuel. In the next 18 months, the researchers will test their solvent at pre-pilot scales — producing 1 litre of sugars per day — says Luterbacher, with the hope of attracting investors for a larger plant 4 or 5 years down the line.

By that time, existing cellulosic ethanol firms may already have established themselves as large-scale businesses — or gone bust. After years of failing to produce any cellulosic fuels at all, the industry began to stir in 2013. A firm called Beta Renewables opened a cellulosic-ethanol plant in Crescentino, northern Italy, and another company, INEOS Bio, started up a facility near Vero Beach in Florida.

This year, companies including POET, Abengoa, DuPont, Mascoma, Enerkem, GranBio and Fulcrum BioEnergy are all hoping to start producing cellulosic ethanol in commercial amounts in the United States and Brazil — either using enzymes to break up plant material into fermentable sugars, or applying extremely high temperatures to break down biomass into ‘syngas’ (hydrogen and carbon monoxide).

Claire Curry, a bioenergy analyst at the information firm Bloomberg New Energy Finance, expects that some 50 million to 60 million gallons of cellulosic ethanol could be commercially produced worldwide this year — up from just a few million gallons in 2013. Barriers to success are now not so much the high costs of the technology to break down cellulose as the lack of guaranteed markets for bioethanol, adds Thomas Foust, director of the National Bioenergy Center at the National Renewable Energy Laboratory in Golden, Colorado.

Nonetheless, says Robert Anex, who studies biological-systems engineering at the University of Wisconsin-Madison, the new solvent deserves to be developed further. “There is great potential for it to help overcome some of the most vexing problems associated with biofuels,” he says.