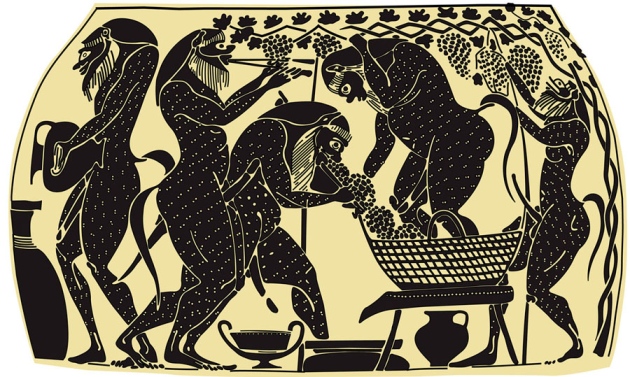 A press found in southern France appears similar to the one depicted in this winemaking scene — from a sixth century bc Athenian vase recovered from the Etruscan site of Vulci, Italy — suggesting that it, too, was used for pressing grapes.

France is renowned for its mastery of winemaking, but when did the country begin its love affair with the vine? A chemical analysis of archaeological artefacts finds evidence that wine was being produced in the south of France by the fifth century bc.

“It’s the earliest evidence we have of winemaking by the Gauls,” says Patrick McGovern, a biomolecular archaeologist at the University of Pennsylvania in Philadelphia, who led the study.

Winemaking originated in the Middle East more than 8,000 years ago, spreading to Egypt by 3000 bc and then to the now-Greek island of Crete by 2200 bc. A thousand years later, Greek and Phoenician merchants had begun shipping wine throughout the Mediterranean region, each in their own distinctively shaped jars called amphorae. By 600 bc, the Etruscans of central Italy were trading their wine along the French Mediterranean coast. Around the same time, wine-loving Greeks established a colony at Massalia (present-day Marseilles, France).

A team led by McGovern has now investigated items from the ancient coastal town of Lattara, one of the best-preserved Iron Age sites in France, located about 125 kilometres west of Marseilles. Using a battery of chemical techniques, including mass spectrometry and infrared spectroscopy, the researchers analysed residues inside Etruscan and Massaliote amphorae that had been retrieved from excavations in Lattara’s merchant quarters. 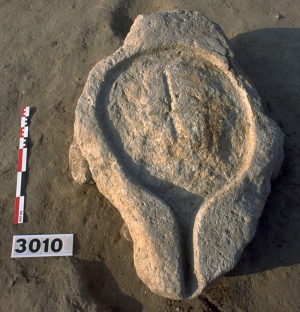 This pressing platform from the Gallic town of Lattara, in southern France, bore traces of tartaric acid — a clue that it was used for winemaking. Grape remains were found near the fifth century bc artefact.

The team found tartaric acid, which occurs in grapes, in all of the jars — strong evidence that they once contained wine. The analyses also revealed the characteristic fingerprints of pine resin, as well as herbs such as rosemary and basil, which may have served as flavourings or preservatives, or added to give the wine medicinal properties.

A limestone platform (see picture), dated to about 425–400 bc, also carried tartaric acid residues. Archaeologists had once thought that it may have been used for pressing olives, but the platform looks remarkably similar to a grape press depicted on a contemporaneous piece of Greek pottery (see picture at top).

Grape seeds and skins were also found scattered nearby. “The combination of botanical and chemical evidence makes a pretty tight argument” that wine was being produced at Lattara, says McGovern.

“There’s been a lot of hypothesizing about shipping wine across the Mediterranean,” he adds. “But it’s never been shown chemically.” The study is published today in Proceedings of the National Academy of Sciences1.

Archaeologists already knew that the people of Massalia had been distributing local wine in their own amphorae since about 550 bc, says Michael Dietler, an archaeologist at the University of Chicago in Illinois. Dietler has worked at the Lattara site and studied winemaking during this period. “This chemical analysis adds another line of evidence — it’s helpful, but not revolutionary,” he says. Although no wine presses have been found at Massalia, Dietler thinks that it is only a matter of time before one turns up.

Dietler concedes that some amphorae could have held olive oil or fish paste, but says that jars found at Lattera had typically been coated with pitch to help seal the ceramic. This indicates that they were used for carrying wine, he says, because the pitch would have dissolved in oil and tainted its flavour. Oil amphorae generally had a very different shape, he adds.

“By and large, archaeologists make a lot of assumptions about what was transported,” says says Brendan Foley, a maritime archaeologist at Woods Hole Oceanographic Institution in Massachusetts, who has studied DNA residues in Greek amphorae. “That’s why this paper is interesting — it’s hard data.”