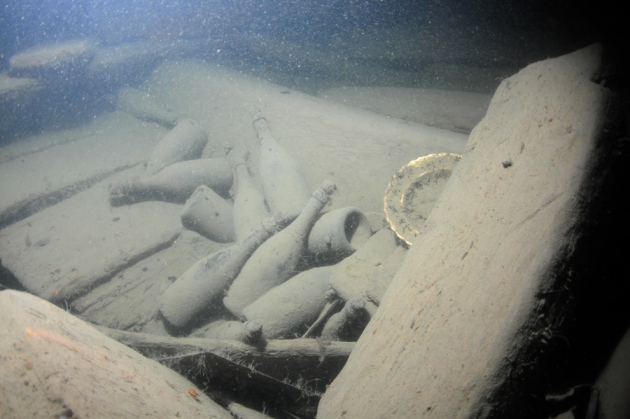 Bottles of nineteenth century champagne were retrieved from a shipwreck in 2010.

When Philippe Jeandet sampled what is probably the oldest champagne ever tasted, he was allowed just one droplet squirted from a microsyringe. Divers retrieved 168 bottles of the 170-year-old champagne from the bottom of the Baltic Sea in an unprecedented haul in 2010, but only 2 millilitres of the drink reached Jeandet's laboratory for analysis.

The small sample shows that the seabed preserved the champagne surprisingly well, and offers clues about nineteenth-century winemaking practices, says Jeandet, a biochemist at the University of Reims Champagne-Ardenne in France. He and his colleagues report their findings on 20 April in the Proceedings of the National Academy of Sciences1.

The bottles were discovered in a shipwreck off the Finnish Åland archipelago, and identified as early nineteenth-century by engravings on their corks. In 2011, two were auctioned off, and one was sold for €30,000 (then US$44,000), a record for champagne. The money went to fund scholarships in marine archaeology projects, says Björn Häggblom, a spokesman for the government of Åland. Eleven more bottles were sold in 2012; the others are stored in Åland and may be auctioned later. (Five beer bottles were also found in the wreck, and an analysis of the beer was published earlier this year2).

Although the shipwreck’s location might indicate the champagne bottles were on a trade route to the Russian Empire, their sugar levels suggest otherwise. Russians were known to consume champagne with sugar content higher than 300 grams per litre, Jeandet says, but the shipwrecked bottles had less than half that. That suggests they may have been intended for German markets, which favoured moderately sweet wines. By present standards, this would be exceedingly sweet: the most popular style today, brut, uses about 10 grams per litre.

Compared to modern champagne, the Baltic samples had considerably higher concentrations of metals such as iron and copper, which may have been the result of using a higher proportion of taille — a lesser quality juice from the second pressing of the grapes. The old samples are also less alcoholic (around 9.5%) than modern equivalents (about 12%).

The presence of wood tannins suggests alcoholic fermentation took place in barrels. A secondary fermentation that changes sharp-tasting malic acid into softer lactic acid probably occurred in the barrels as well, says Jeandet, but the process would not have been as closely controlled as it is today. That explains why the wine had a creamy or yoghurty quality that is not common to today’s wines, he says; expert tasters described it as “cheesy”.

The Baltic samples also elicited descriptions such as “animal notes” and “wet hair”. But a quick swirl in the glass to oxygenate the wine yielded more pleasant aromas, described as “grilled”, “spicy”, “smoky” and “leathery”. Some of the bottles were found to be from the Reim-based champagne house Veuve Clicquot; Dominique Demarville, head of the winemaking team there, has tasted the champagne on three occasions and says that after a few minutes he detected ripe fruits, truffles, smoke and honey. 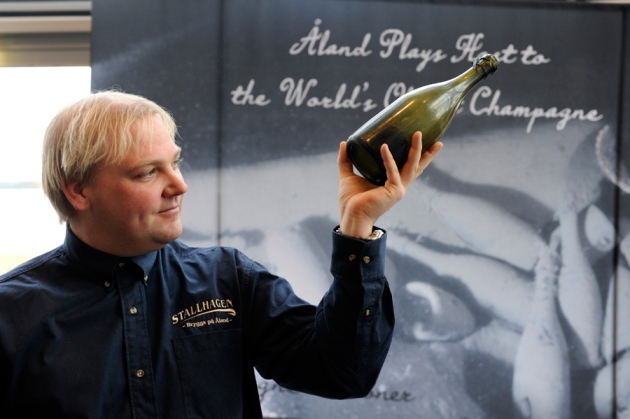 The vintage champagne was auctioned for record prices in 2011 (Christian Ekstrom, a diver who found the under-sea haul, is pictured).

“The identification of very specific flavour and aroma compounds points to a very complex product, like modern champagne, albeit having been altered somewhat,” says Patrick McGovern, a biomolecular archaeologist at the University of Pennsylvania in Philadelphia. “Considering that these champagnes had been ‘aged underwater’ for 170 years, they were amazingly well preserved.”

The conditions in which the champagne was found — in near darkness at a constant temperature of 2–4°C — probably helped to preserve its aromas and taste, says Jeandet. Veuve Clicquot has now put 350 bottles of more recent vintage on the sea floor, close to Åland’s Silverskär island. Tasters intend to try the bubbly every three years and compare it with identical bottles stored in the champagne-maker’s own cellars, says Demarville, to see how the different pressures, temperatures, and oxygen levels change the wine.