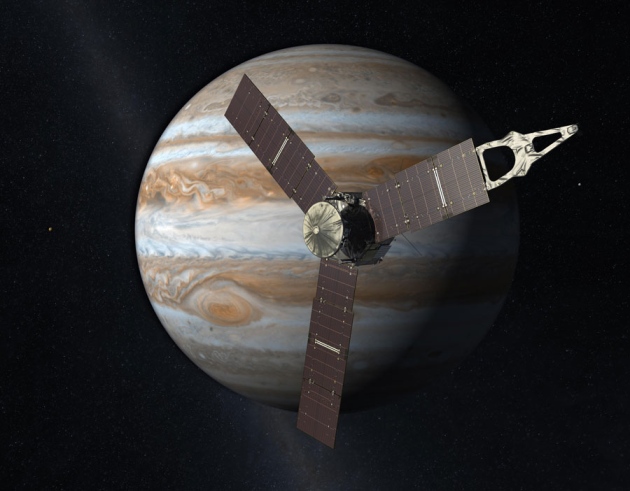 From its orbit around Jupiter, the spacecraft Juno will probe what powers the planet's Great Red Spot.

In the end, it went flawlessly. NASA’s Juno spacecraft slipped into orbit around Jupiter last night, becoming the first mission in 21 years to visit the giant planet.

The US$1.1-billion Juno threaded the needle between the searing radiation belts that surround the planet and its turbulent cloud tops. An engine burn slowed the robotic craft, which launched in August 2011, allowing it to be captured into an orbit around Jupiter that will take the craft soaring over the planet’s poles once every 53.5 days.

Mission controllers at NASA’s Jet Propulsion Laboratory (JPL) in Pasadena, California, burst into cheers and applause at 8:53 p.m. local time on 4 July, when they received a signal from Juno, indicating that the burn had gone as planned. At its closest approach, the spacecraft hurtled just 4,500 kilometres above Jupiter’s clouds, at a speed of 58 kilometres per second.

In the coming days, engineers will begin to check out the spacecraft’s nine instruments, turning them on to see how they perform near Jupiter. “We’ve been flying in interplanetary space for five years,” says Tim Gasparrini, Juno’s programme manager at Lockheed Martin Space Systems in Littleton, Colorado, which built the spacecraft. “Now we need to learn how to fly in planetary space.”

The next big milestone comes on 27 August, when Juno whizzes past Jupiter on its next close approach. “That’s when we’ll get our first really good look at Jupiter and learn how it will surprise us,” says Steven Levin, Juno project scientist at JPL. “We will have all our eyes and ears open,” adds Scott Bolton, the mission’s principal investigator at the Southwest Research Institute in San Antonio, Texas.

Jupiter glimpsed as aliens would see it

After that, Juno will fly a second 53-day orbit before burning its main engine again to settle into a series of 14-day orbits. Most of the science will be conducted during these later passes, in which Juno will swoop in close for several hours and then spend two weeks radioing the information that it gathers back to Earth so that researchers can make sense of it.

Entering orbit was the most dangerous thing Juno had done since its launch. The risks included being zapped by Jupiter’s blazing radiation or smashed by dust particles.

As planned, Juno broke contact with Earth and turned away from the Sun to get into the proper orientation to burn its main engine. The craft, which is shaped like a wind turbine, spun up from its usual 2 revolutions per minute to 5, to keep it stable during the 35-minute blast. Then the spacecraft slowed back to 2 revolutions per minute, turned its face back towards the Sun, and began charging its solar-powered batteries again. 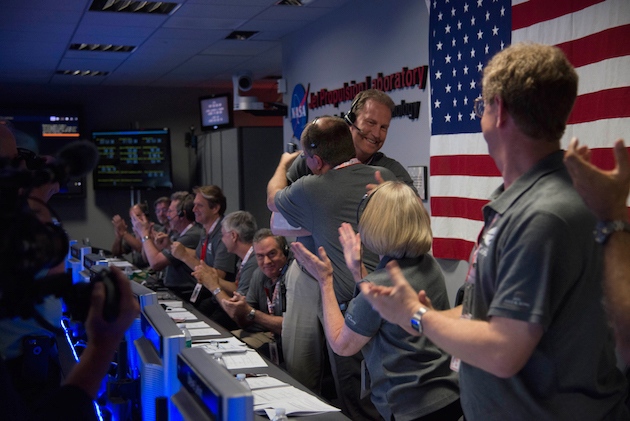 Spinning slowly means that each instrument mounted on the spacecraft has its chance to study the planet as Jupiter passes through the instrument’s field of view. Three enormous solar panels, each the size of a school bus, power the mission in a region of space where sunlight is 1/25th the intensity of that at Earth.

The mission’s goal is to determine what Jupiter is made of — including how much water it contains, what powers its Great Red Spot, and whether it has a core. Jupiter is the Solar System’s biggest planet and was the first to condense around the Sun 4.5 billion years ago.

Team scientists released a movie taken during Juno’s approach, showing Jupiter's biggest moons dancing around the planet over the course of 17 days.

Juno is scheduled to fly 37 orbits around the planet, before diving into the cloud tops in a self-immolating plunge in early 2018.