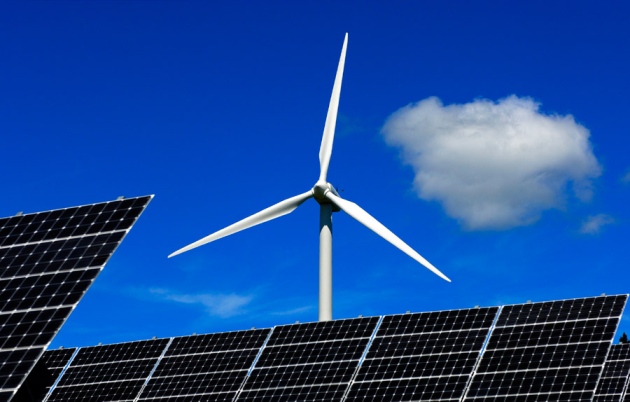 The intermittency of solar and wind energy is leading grid operators to look for better ways of storing energy.

Power harvested from the Sun and wind is pouring into electricity grids by the gigawatt. That makes it ever more important to find an efficient and convenient way to store renewable energy for those times when the breeze dies or the skies cloud over.

“Now we have a good chance of solving that problem,” says Michael Aziz, a materials scientist at Harvard University in Cambridge, Massachusetts. His solution is a flow battery that packs a high energy density with no need for the expensive metals found in other models.

Flow batteries work by pumping different chemical broths over two electrodes separated by a membrane. The chemicals exchange protons across the membrane and shuttle electrons around the circuit that connects the electrodes, which discharges the battery. Reversing the reaction recharges the cell (see diagram at the bottom).

The big advantage of flow batteries is that the chemicals can be stored in tanks outside the battery assembly. Increasing capacity is simply a matter of building larger tanks, making flow batteries particularly suitable for large-scale energy storage.

“The problem is, vanadium is really expensive,” says Aziz.

Over the past few decades, researchers have investigated many other chemical systems, and ruled all but a handful out. “The periodic table has been pretty well picked over,” says Aziz. “So we’ve introduced the world of organic chemistry to this problem.”

His battery’s anode uses a solution of sulphuric acid containing a type of organic compound known as a quinone. The quinone is cheap and needs no catalytic urging to react with protons to form a higher-energy hydroquinone, thereby charging the battery. Aziz teamed this half of the flow battery with a well-known partner: a cathode that alternates between bromine and hydrobromic acid.

The quinone–hydroquinone reaction is about 1,000 times faster than the rival vanadium reaction, allowing the battery to charge and discharge rapidly. And by changing some of the quinone’s chemical groups, Aziz can alter their solubility and even the voltage of the flow battery, fine-tuning the system. The battery, unveiled today in Nature1, has completed 100 charge–discharge cycles with no sign of degradation (although a commercial system would probably need to top 10,000 cycles).

Aziz reckons that his flow battery could store one kilowatt hour of energy in chemicals costing $27 — one-third the price of the rival vanadium system. Further improvements could make it competitive with other technologies for storing vast amounts of energy, such as compressed air.

“I just wish I’d thought of it, because it’s such a simple system,” says Robert Savinell, an electrochemical engineer at Case Western Reserve University in Cleveland, Ohio. “And the simplest ideas are often the most effective.”

The system is far from perfect, however: bromine and hydrobromic acid are corrosive, and could cause serious pollution if they leaked. “The bromine is, right now, the Achilles heel of this particular battery,” Aziz says. The answer could be to go completely organic, he adds: “We are working on replacing the bromine with a different quinone.”

He has funding from the US Advanced Research Projects Agency—Energy (ARPA—E) to develop the concept into a large prototype “about the size of a horse trailer” within three years. His team is also working with clean-technology company Sustainable Innovations of Glastonbury, Connecticut, to commercialize the flow battery.

It is not just energy companies that are interested in flow batteries. “The biggest market at entry level is for industries that want to lower their electricity bills by buying cheaper power at night, and using it for manufacturing during the day,” says Savinell.

Cheaper flow batteries could even be teamed with household solar arrays, adds Aziz. Using a system no bigger than the 2,000-litre heating-oil tanks that are already installed in many homes, he reckons, “it's plausible to store a day of solar energy, and power your home in the evening”. 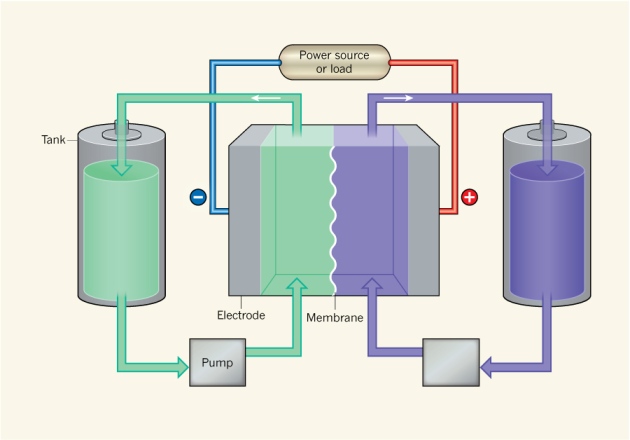 In a flow battery, two liquids are pumped from separate reservoirs to undergo reactions and exchange positive ions across a membrane, generating electricity. In charging mode, the reaction is reversed.