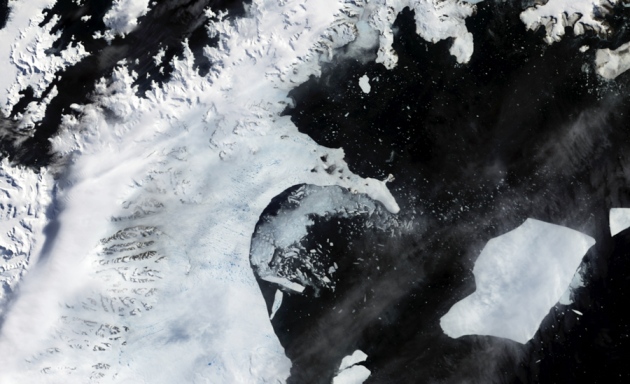 The Larsen B Ice Shelf's collapse in 2002 was surprisingly rapid because cracks produced by draining lakes caused other lakes to drain in a chain reaction, geophysicists now believe.

It took decades for global warming to slowly melt the surface of the Larsen B Ice Shelf on the Antarctic Peninsula, forming nearly 3,000 lakes. But at the end of the Antarctic summer of 2002, all the lakes drained away in the space of a week. And then the 2,700-square-kilometre ice shelf, which was some 220 metres thick and probably had existed for some 12,000 years, rapidly disintegrated into small icebergs, leaving glaciologists scratching their heads.

It was “like the smashing of glasses at the throw of a stone”, University of Chicago geophysicist Douglas MacAyeal said last week at an International Glaciological Society meeting in Beijing.

Researchers have been wondering ever since what could have caused the sudden draining of the lakes, and whether this caused the demise of the ice shelf. Now, a study led by MacAyeal might answer both questions.

Using a mathematical model originally developed by Russian scientists to understand how to drive loaded trucks across frozen rivers, MacAyeal and his team found that the draining of one lake on an ice shelf changes the stress field in nearby areas, causing a fracture circle to form around the lake.

As MacAyeal explained at the meeting, this is caused by ice elasticity. Ice bends in response to a heavy load, and bounces back when that load is taken off. “Draining a lake is equivalent to taking the load off the ice,” he said.

The researchers showed that if there are many lakes on an ice shelf, the disappearance of one lake could result in fractures under others — an effect that can spread rapidly throughout the ice shelf. “This chain reaction could explain why the lakes drained all together,” MacAyeal said.

Most of the lakes were about 1,000 metres wide, according to a poster presentation at the same meeting by study co-author Alison Banwell. Once drained, each would leave behind a ring fracture about 4,000 metres wide. When lakes are tightly packed together, as they were on the Larsen B ice shelf, the chain of fracturing would result in thin icebergs calving off, Banwell said.

“This is a cool idea that could neatly explain the peculiar phenomenon of the Larsen B breakup,” says Ted Scambos, a glaciologist at the National Snow and Ice Data Center in Boulder, Colorado.

“It adds into a more complete picture of ice-shelf disintegration,” says Christina Hulbe, a geophysicist at the University of Otago in Dunedin, New Zealand. But, she says, it remains to be seen how it works together with other mechanisms — such as sustained propagation of natural fractures caused by prolonged surface melting, or ice-shelf thinning owing to warming oceans — to produce the catastrophic event seen with Larsen B.