CERN, Europe’s particle-physics laboratory, is taking a cautious approach on persistent rumours (see, for example, the ViXra blog) that two experiments at its Large Hadron Collider — ATLAS and the Compact Muon Solenoid, or CMS — have independently found evidence for the Higgs particle with a mass of 125 giga­electronvolts (GeV) — right in the ballpark predicted by the standard model of particle physics.

The Higgs is a missing piece of the standard model thought to endow all other particles with mass. Detailed rumours at Peter Woit’s blog Not Even Wrong say that ATLAS has observed a signal of a Higgs particle at 125 GeV with a significance level of 3.5 sigma — with 3 being enough to claim evidence but 5 needed for a discovery — and that CMS has seen one at 2.5 sigma. As Geoff Brumfiel’s article 'Higgs hunt enters endgame' reports, prior results from particle colliders have all but ruled out the Higgs in the ranges below 114 GeV and above 141 GeV. 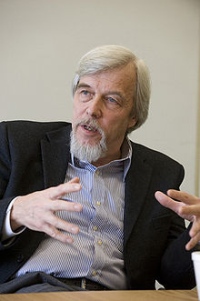 Physicist Bill Murray, who is leading the ATLAS search for the Higgs, tells Nature that he cannot comment on the latest rumours. That is because work is still in progress to analyse 5 inverse femtobarns of data that have amassed over the summer, with a final decision to approve the current analysis scheduled for Wednesday, 7 December. Murray also notes that such approvals are often delayed. An additional level of management approval will also be necessary before the result can be released at a seminar scheduled for 13 December. "We are moving forward in our understanding of the data and approval process but nothing will be solidly releasable for a while," Murray says.

In an e-mail to CERN staff that was reported on Lubos Motl’s blog the Reference Frame, Rolf Heuer, director-general of CERN, seems to manage expectations, noting that a seminar scheduled on 13 December to release the results officially will be unlikely to reveal conclusive evidence for the Higgs particle. “These results will be based on the analysis of considerably more data than those presented at the Summer conferences, sufficient to make significant progress in the search for the Higgs boson, but not enough to make any conclusive statement on the existence or non-existence of the Higgs,” he says.

ViXra comments that a Higgs at 125 GeV is good news for particle physics, because it is favoured by supersymmetric models that would imply that other heavy particles may be found. A heavier Higgs would mean that the masses of those particles would be too high to be accessible by the Large Hadron Collider.