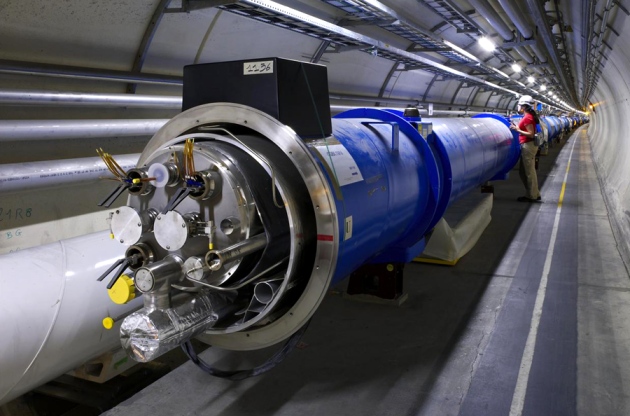 A magnet module in the LHC tunnel during construction: its diode box, similar to the one where a fault emerged, is seen protruding at the bottom left.

Days before it was supposed to start circulating protons again after a two-year hiatus, the world's largest particle accelerator has developed a short circuit. The team behind the Large Hadron Collider (LHC) is now evaluating its options to determine whether the problem will cause a delay of days or months.

“An intermittent short circuit to ground in one of the machine’s magnet circuits was identified on 21 March and is under investigation,” says a 24 March statement from the CERN, Europe's particle-physics lab near Geneva, Switzerland, which hosts the LHC.

The suspicion is that the short circuit, which is interrupting the power supply to one of the accelerator’s magnets, is caused by a piece of debris. “A small metallic object is sitting in what we call the diode box,” explains accelerator physicist Lyn Evans, who led the original design and construction of the LHC.

There are two beam pipes at the heart of the LHC that circulate protons. The diode box is part of the complex system of electronics that surrounds these pipes.

The accelerator, which made its landmark discovery of the Higgs boson in 2012, shut down in 2013 for upgrades. Designed to ramp up the energy of the collider, the improvement programme involved a lot of cutting and welding, says Evans. “It’s unavoidable to have small bits of metallic debris in the circuits.”

He adds that a similar problem occurred before, at the start of the LHC’s first run, and is often solvable without causing major delays.

In the best-case scenario, he says, the accelerator team will be able to remove the metal debris by flushing it out with high-pressure helium gas. This will require warming up the liquid helium that flows inside the 15-metre long superconducting magnet module, where the diode box is found, but by only a few degrees above its operating temperature of 1.9 kelvin.

If this ‘purge’ does not work, he says, the team may need to open up the module. This would require temporarily warming an entire sector of the 27-kilometre ring up to room temperature — and would cause a much longer delay. “If we have to warm up the whole sector, that’s a couple of months,” says Evans. CERN staff are also X-raying the magnet to diagnose the problem precisely.

The short circuit is not comparable to the fault that caused a magnet to explode when the LHC first started up in 2008. In that case, the magnet was already on, but in this case the fault prevents the magnet from turning on, says Evans. “You can’t even put current in a magnet with a ground fault.”

Evans is now director of the Linear Collider Collaboration, which is planning a next-generation collider, but he says that he is still on hand to provide advice about the LHC.