The ceramic material coating this surface is so hydrophobic that the droplet bounces off, leaving virtually no residue.

Coatings that repel water are found in myriad applications — they keep car windscreens clear in storms, for example, and ensure that rainswept hikers stay snug and dry. But they quickly wear away in harsh environments, such as the insides of power-station turbines, where condensation reduces efficiency. As a result, engineers are eager to get their hands on tough materials that are intrinsically hydrophobic.

Now they can, following the discovery that a well-known family of durable ceramics can repel water.

But what if a ceramic failed to accept electrons from water? Then the ceramic might actually be hydrophobic, reasoned Kripa Varanasi, a materials scientist at the Massachusetts Institute of Technology (MIT) in Cambridge. He looked to the oxides of the lanthanides — the row of metals nestled almost at the bottom of the periodic table, from cerium to lutetium. The lanthanides' empty orbitals are buried beneath shells of other electrons, which should make them much less attractive to water’s oxygen, thought Varanasi.

Proving that sometimes the simplest experiments are the best, he and his colleagues tested the idea by making small ceramic discs of the oxides of all the lanthanides except radioactive promethium. The team then dropped water onto the pellets and watched what happened.

Every single one repelled the liquid. When water condensed on to the discs, it did so in neat droplets rather than the films that would form on non-hydrophobic materials such as silicon. And cerium oxide — the cheapest and most widely available of the lanthanide oxides — remained hydrophobic even after a two-hour sauna at 1,000 °C, or a thorough grinding with abrasive silicon carbide. The results are published today in Nature Materials1. 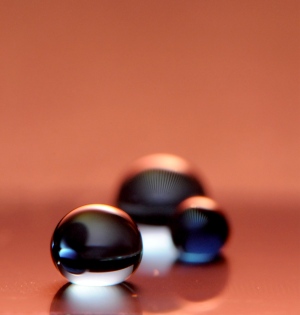 A thin film made of a water-repelling ceramic material — here a rare-earth oxide — can help you stay dry.

The water-repelling properties of cerium dioxide had been noticed before2, for example by a student working with Barry Cheung, a materials scientist at the University of Nebraska–Lincoln. But no one had investigated these properties in detail. Indeed, most chemists would have failed to spot the hydrophobicity of the lanthanide oxides, Cheung speculates, if their samples had defects — specifically, missing oxygen atoms — that allowed water to latch on.

Cheung suggests that Varanasi's ceramics were particularly hydrophobic because they had very few oxygen defects - perhaps a consequence of their formation in dry air at high temperatures of around 1,500 °C.

Varanasi says that hydrophobic ceramics could improve the efficiency of energy generation. As steam passes through the turbines of a thermal power station, water condenses onto the blades and forms droplets many micrometres across. The rotating blades lose energy as they smash into these droplets, accounting for up to 30% of the inefficiency of the turbine, he says.

A hydrophobic coating made of tough ceramic would prevent films of water forming on the blades, he says. Another application could be in wind turbines, where films of water on the blades can, if they freeze in cold weather, lead to catastrophic failures.

Varanasi is now working with energy and technology companies partnered with the MIT Energy Initiative, which co-funded his work, to test the ceramics in real-world applications.