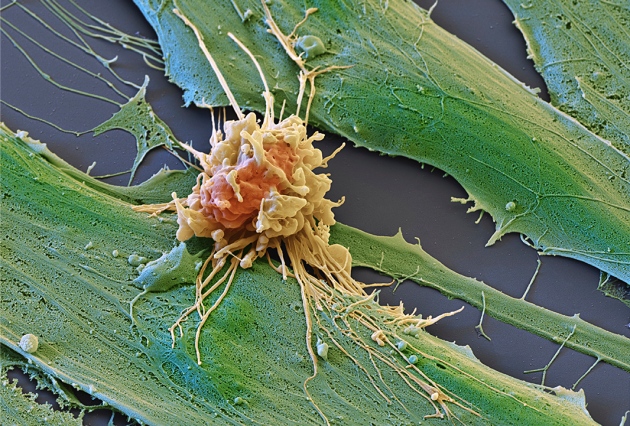 Rhabdomysarcoma, a type of muscle cancer, is shown here in green being attacked by an immune cell.

Deep in the basement archives of London's Great Ormond Street Hospital for Children reside the patient records that cancer researcher Sam Behjati hopes will put the hospital's past to work for the future. On 2 May, he and his colleagues published the result: DNA sequences from the genomes of three childhood tumour samples collected at the facility almost a century ago1.

Those historic cells help to address a modern problem: the small number of tumour samples from rare cancers that are available for researchers to sequence. Behjati knows this problem well. At the Wellcome Trust Sanger Institute in Hinxton, UK, he tracks the genomic miswiring that can lead to rare childhood cancers. And as someone who also treats patients, he has been frustrated by the paucity of evidence backing up much of his practice.

“The treatment regimens for children with rare cancers are essentially made up,” Behjati says. “If you’ve got three or four patients nationally, how are you ever going to conduct a reasonable clinical trial?”

To expand the pool of samples that he could sequence, he decided in 2014 to harness advances in genome sequencing that had already made it possible to sequence DNA from pathology samples a few decades old. The hospital's 165-year archive of samples and patient records provided the opportunity to see how far back in time he could go.

The work highlights the wealth of material that is available in such archives, says Danielle Carrick, a programme director at the US National Cancer Institute in Rockville, Maryland. Mining such archives can expand the options for studying rare conditions and understudied ethnic populations, she notes, and make large, population-scale studies possible.

Researchers have analysed DNA from much older specimens: fragments of genome sequence have been used to study ancient human populations from hundreds of thousands of years ago. But DNA tends to degrade over time, and cancer researchers need high-quality sequences to pinpoint the many individual mutations that can contribute to tumour growth.

Great Ormond Street Hospital was founded in 1852 on the back of charitable donations raised chiefly by the author Charles Dickens. Behjati and pathologist Neil Sebire of the Great Ormond Street Hospital Institute of Child Health at University College London directed their team to begin searching its archive for samples from the 1920s, however, when the terminology used to classify tumours was more easily comparable to modern diagnoses. 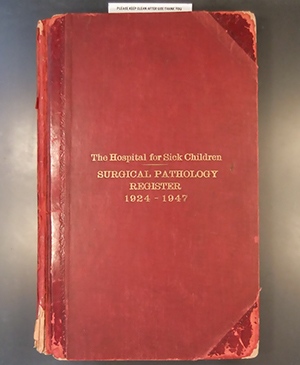 The team pored over the patient registry, a well-worn tome with patient names, numbers and diagnoses handwritten in a tiny, precise scrawl. The samples arrived in a small cardboard box filled with dozens of paraffin wax cubes roughly the size of fingernails, with patient numbers handwritten on the sides of each block. Within each chunk of wax was a sample that had been soaked in a solution containing formaldehyde to preserve the tissue and make it rigid.

Sebire and his colleagues fished out the blocks they needed, took a thin slice of each and dyed the tissue red and pink with stains. The whole technique — the formaldehyde, the wax, the stains — is well over a century old, Sebire notes.

What has changed dramatically, however, is cancer treatment. The children with cancer who came to Great Ormond Street in the 1920s had few options beyond surgery. Chemotherapy was still decades away. And in the absence of modern imaging methods, children who were diagnosed often had advanced disease, their tumours large enough to be felt by the physician.

Behjati hopes that those tumours will now help him and others to develop better options for future patients. The team picked three samples: a muscle cancer called rhabdomyosarcoma, a blood-vessel tumour called cellular capillary haemangioma and a lymphoma. After they confirmed the original diagnoses using the stained slices, his team extracted DNA from much of the remaining sample and sequenced 366 genes in each one. They found cancer-associated mutations in all three samples.

He plans to keep searching through the Great Ormond Street Hospital collection, and then perhaps to mine the archives of other hospitals for relics of childhood cancers. As his collection grows, he will look for commonalities and potential drug targets.

Childhood cancers might be particularly amenable to the approach, notes Sebire. The genomes of adult cancers are often scarred by hundreds of mutations; the genomes of childhood cancers, however, tend to contain far fewer alterations. This makes it easier for researchers to home in on those mutations that are most important, and to sift through the background noise of degraded DNA.

But as these centuries-old samples find a modern use, the pathology techniques that were used to create them are on the wane, he adds. Not long from now, Sebire predicts, pathology labs will give up their microscopes altogether in favour of instruments that rapidly sequence DNA and proteins and identify metabolites.

“The process hadn’t really changed for over 100 years,” he says. “But by the time I retire, I fully expect that you won’t need to do what I do now.”