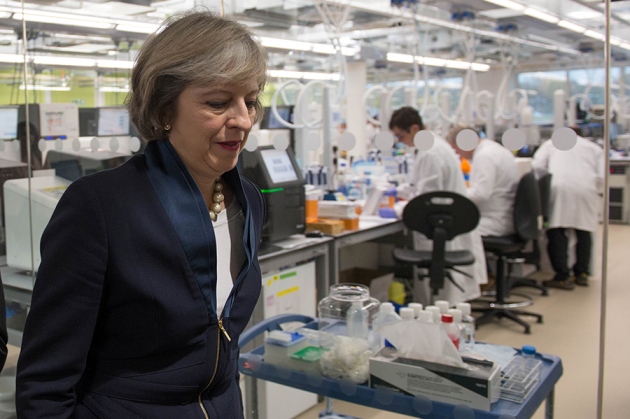 UK Prime Minister Theresa May has announced extra investment in the nation's research.

UK scientists have welcomed a surprise government promise to invest an extra £2 billion (US$2.5 billion) per year into research and development (R&D) by 2020 – although details of the pledge will not be made clear for at least another two days.

In a speech delivered in London on 21 November to the Confederation of British Industry, Prime Minister Theresa May declared that her government would “commit to substantial real terms increases in government investment in R&D — investing an extra £2 billion a year by the end of this Parliament to help put post-Brexit Britain at the cutting edge of science and tech”.

May said that some of the investment would be made through a new Industrial Strategy Challenge Fund, which, she added in an article for the Financial Times, would be used to back R&D in technologies such as robotics, artificial intelligence and industrial biotechnology.

"I'm impressed. The Prime Minister's commitment to make our strength in science and innovation the cornerstone of the UK's future couldn't be clearer,” said Sarah Main, the director of the London-based Campaign for Science and Engineering.

Where will it go?

A government statement noted that the promised investment would be “worth £2 billion per year by 2020”, a wording that implies that it could be made in the form of subsidies other than direct funding, such as tweaks to the tax credits that companies are offered for performing research-related activities. Some researchers, including James Wilsdon, who studies research policy at the University of Sheffield, immediately questioned how much of the investment would take that form.

Keen to see hard numbers behind this “extra £2bn a year” for R&D by 2020. How much research; how much tax credits? https://t.co/bKhRtNcxQ4

The government says that it currently invests around £6.3 billion directly in R&D (not including separate funding for higher-education institutions) and more than £2 billion in R&D tax credits. But details about the new investment are scarce: government press officers said they could not provide details until after an annual statement on government spending, to be delivered on 23 November.

University researchers also worry whether the investment will cover a potential loss of research funding after Brexit. They fear that, depending on the terms of the split, less research money will flow to the United Kingdom from the European Union.

Science minister Jo Johnson said in a tweet that the money was “coming to our world class scientists through UKRI” — referring to UK Research and Innovation, an agency that has not yet been created, but is expected to unite several now-separate organizations: the UK’s seven public research-grant agencies and an innovation funder called ‘Innovate UK’, as well as enveloping some higher-education funding.

“This is excellent news for science and innovation, with substantial new money for UKRI. As I understand it, UKRI will have considerable discretion over how the money will be spent, having regard for priority areas,” said John Krebs, a zoologist at the University of Oxford, and president of the British Science Association, in a statement issued by the London-based Science Media Centre (SMC).

Researchers are now waiting for the 23 November statement for further details about the investment. But the news has alleviated some post-Brexit gloom. “I would broadly welcome Theresa May’s announcement today, though clearly the devil will be in the detail,” says Stephen Curry, a biologist at Imperial College London, in another SMC-issued statement.