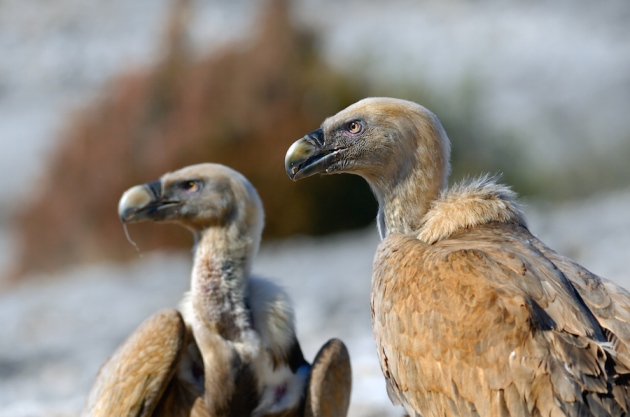 Eurasian griffon vultures, like these in Huesca, Spain, are threatened by veterinary use of diclofenac, researchers say.

A veterinary drug blamed for driving vultures to the brink of extinction on the Indian subcontinent could cause thousands of bird deaths now that it is being used in Spain.

Researchers have expressed concern over use of the anti-inflammatory drug diclofenac in cattle since it was approved for veterinary use in Spain in 2013, as the drug is toxic to vultures who may consume it via dead cows. Now, modelling by Rhys Green, a conservation scientist at the University of Cambridge, UK, and his colleagues suggests that the drug could cause populations of that country’s Eurasian griffon vultures (Gyps fulvus) to decline by between 1–8% each year. Their work was published on 25 April in the Journal of Applied Ecology1.

“You can almost liken it to the rather macabre game of Russian roulette,” he says. “Vultures eat about every three days on average, so that’s 120 days a year — and so that’s like 120 pulls of the trigger.”

Widespread use of diclofenac in south Asian cattle was linked to the deaths of millions of vultures that ate carcasses containing the drug, causing some populations to decline by more than 99% since the 1990s. Although diclofenac does not yet seem to have caused population declines for Europe’s vultures, scientists suspect that it might only be a matter of time.

Because vultures congregate to feed, Green says that even a few carcasses containing the drug could seriously damage a population. Along with Antoni Margalida from the University of Lleida in Spain, and other colleagues, he is calling for a ban of the veterinary drug in favour of an alternative called meloxicam that is less toxic to vultures.

Diclofenac is toxic to vultures even in small doses, causing kidney failure. That results in uric acid accumulating in the birds' blood and crystallizing around their internal organs—a condition called visceral gout2.

Countries on the Indian subcontinent began banning diclofenac in 2006 and since then, vulture populations in the region seem to have halted their precipitous declines3.

In Europe, diclofenac has been approved for veterinary use since 1993. In 2014, the European Medicines Agency acknowledged that vultures are at risk of consuming residues of the drug in dead livestock, but did not recommend banning it. In 2015 the European Commission decided to follow the EMA’s recommendation, leaving it up to EU member states to prevent diclofenac-laced carcasses from entering the food chain.

But in 2012, a dead vulture discovered in Spain was found to contain high levels of a similar drug called flunixin4, indicating “that another non-steroidal anti-inflammatory drug in veterinary use in Spain — which shouldn’t have gotten into the vulture’s food chain — did, in this case”, says Green.

Since then, toxicologist Rafael Mateo Soria at the University of Castilla-La Mancha says there have been at least two more vulture poisonings in Spain with flunixin. So when it comes to diclofenac and vultures, “you’re playing with fire”, he says.

Spain's medicines agency, AEMPS, and its agriculture ministry, MAGRAMA, had  previously modelled annual vulture mortality from diclofenac poisoning, and estimated that 15–39 birds might die from it each year.

The population declines calculated by Green’s team — 715 to 6,389 bird deaths per year — are significantly more worrying. They used the same numbers of medicated carcasses that MAGRAMA and AEMPS proposed vultures might eat, but allowed for a little more uncertainty about the lethal dose of diclofenac. Such a die-off could drive populations to extinction.

“The reality is, I am 100% sure is that there is no way that any one model can predict perfectly,” says Todd Katzner, a wildlife biologist with the US Geological Survey. “At the same time, I think this model is very useful in terms of understanding the biology of the situation.”

The European Commission and the manufacturers of diclofenac drugs in Europe did not reply to Nature’s requests for comment.