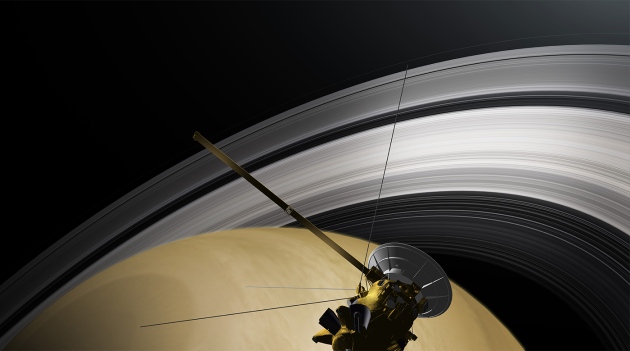 An artist's conception of one of Cassini's 'grand finale' orbits around the gas giant Saturn.

At 4:55 a.m. California time on 15 September, hundreds of scientists watched their life’s work go up in flames. The Cassini spacecraft disintegrated in Saturn’s atmosphere in a mission-ending move meant to keep the probe from contaminating the planet’s moons, including Titan and Enceladus, that could harbor signs of life.

Cassini’s final images, transmitted in the hours before its death, included an evocative sequence of Enceladus setting behind Saturn, as well as a final close-up look at some of the planet's rings.

The spacecraft’s last radio signal died away Friday morning as planned when the probe entered the atmosphere at about 113,000 kilometres an hour, roughly 10 degrees north of the planet’s equator. As Cassini plunged to its death, it transmitted a last burst of data from its Ion and Neutral Mass Spectrometer. This instrument measures the chemical composition of gases, and provided scientists with their first direct taste of Saturn’s atmosphere. That data “will be the most exciting result scientifically,” says Ralph Lorenz, a planetary scientist at the Johns Hopkins University Applied Phyics Laboratory in Laurel, Maryland.

Hidden in the dust

But the research team’s work is not yet over. Many discoveries about Saturn’s moons, rings and interior are likely to emerge in the coming months. Since April, Cassini has carried out a series of 22 orbits, looping between the giant planet and its rings — a perspective never before captured.

During these orbits, Cassini’s Cosmic Dust Analyser, which looks at the size and composition of small particles, has been directly measuring the composition of material in Saturn’s main rings for the first time, says Sascha Kempf, a space physicist at the University of Colorado Boulder. “The data set is rich and surprising,” he says. “Stay tuned.”

The dust data also look set to answer a long-standing question: how old the rings are. By studying how dust falls onto the rings' icy particles and dirties them, the team can estimate how long the rings have been around. Some scientists argue that they date back billions of years, whereas others think that they are much more recent, on the order of 100 million years or fewer. “Please give us a few more days to verify our conclusions, but we are pretty sure that we know the age of the rings,” Kempf says. This knowledge will help researchers to narrow down how they formed.

Cassini’s gravity measurements are helping researchers to pinpoint other key information about Saturn. By analysing the gravitational effect of the rings on Cassini — a force best measured as the probe plunges between the planet and the rings — researchers are narrowing down their estimates of the rings’ mass, as well as the mass of the planet’s core, says Luciano Iess, a planetary scientist at the University of Rome La Sapienza. 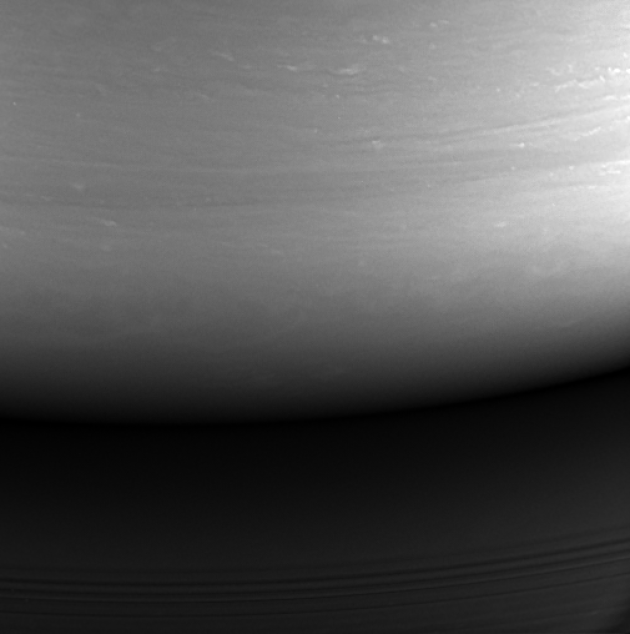 Cassini's last image shows Saturn's night side lit up by light reflected from the planet's rings.

The rings' mass can also be used to help tease out their age, since the more massive the rings, the older they may be. Preliminary analysis of data from Cassini's grand-finale orbits have given Iess and his colleagues their best estimate yet of the rings' total mass. “We cannot release any value yet,” Iess says, “but this is the first indication that we have that probably the rings didn't form together with Saturn.” By comparing those results with the estimate from Cassini's dust analyser, researchers hope to be able to settle the question of ring age once and for all.

Cassini’s magnetometer has already made some unexpected discoveries. Saturn’s axis of rotation and its magnetic axis turn out to be almost perfectly aligned, says Linda Spilker, the mission’s project scientist at NASA’s Jet Propulsion Laboratory (JPL) in Pasadena, California. That has puzzled researchers, because models have suggested that there needs to be at least a slight offset between the two axes for the planet to maintain a magnetic field.

The finding “suggests that we don’t really understand Saturn’s internal structure and how the planetary dynamo is generated yet”, says Michele Dougherty, a space physicist at Imperial College London. She estimates that it will take another three to six months to crunch through the data and understand exactly what they mean.

Other potential discoveries will require researchers to put together all of Cassini’s data sets from all of its instruments over its entire 13-year study of Saturn. That includes watching the planet and its moons change over time: “We have a whole half-season of changes on Saturn and Titan to study,” says Bonnie Buratti, a planetary scientist at JPL. And finishing the geological mapping of Titan will enable researchers to better understand the moon’s varied terrains, from its windswept dunes to its frozen mountains, says planetary scientist Rosaly Lopes, also at JPL.

Cassini scientists have another year’s worth of funding to tease more secrets out of the data. But after that, there are no US missions on the books to return to Saturn — unless researchers can persuade NASA or other space agencies otherwise. Scientists have submitted proposals to NASA to study Saturn and some of its moons, projects that will be up for consideration later this year as the agency decides on its next set of missions.

The headline and text have been updated to reflect the fact that Cassini crashed into Saturn as planned.