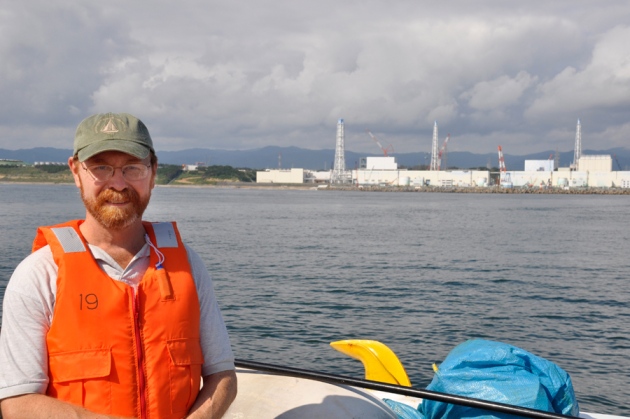 Ken Buesseler on a boat off the Fukushima Daiichi plant, after the 2011 tsunami caused meltdowns at three of its reactors.

Ken Buesseler was one of the first scientists to analyse the sea water off the coast of Fukushima, Japan, after the nuclear meltdowns that followed a devastating tsunami there in March 2011.

This week, the marine chemist, based at the Woods Hole Oceanographic Institution in Massachusetts, launched How Radioactive Is Our Ocean?, a crowd-funding website that urges people to support the collection and analysis of seawater samples along the west coast of the United States.

Although larger, wind-blown debris from the Japanese tsunami began to be spotted on North American shores shortly after the disaster, and migratory fish such as bluefin tuna have already shown up off California carrying radioactive isotopes from the spill, oceanic currents move much slower. The Fukushima spill therefore is unlikely to have anything to do with reports such as the mysterious die-off of sea stars in California. Now, however, contaminated sea water is finally due to arrive on the eastern side of the Pacific, and so it is time to start keeping watch.

How did you end up working on Fukushima fallout? Isn’t Woods Hole about as far as it’s possible to get from Japan?

I did my PhD looking at fallout from the 1960s nuclear-weapons testing. 1986 was the year I defended [my thesis], which of course was the year of the Chernobyl disaster. So I started out looking at artificial radionuclides in the ocean.

When Fukushima happened, the first things we saw were some of the numbers from the Tokyo Electric Power Company [which ran the reactors at the plant], and they had measured levels of the caesium isotopes 137 and 134 on scales of tens of millions of becquerels per cubic metre. The number pre-disaster was one or two of those units. We thought this was unprecedented for the ocean and we really need to find out how that’s being dispersed.

In terms of total release of radioactive materials — as opposed to local concentrations — how do the Fukushima leaks compare to those from previous radioactive releases, such as from weapons testing in the 1960s?

The total global fallout number for caesium from the 1960s tests was around 950 petabecquerels (a unit of quantity, rather than concentration). Chernobyl was around 100. Fukushima? We’re still debating that number. Fifteen to 30 is a rough estimate.

How concerned should people in the US be about this radioactive contamination reaching their seas?

There will be — by every prediction — Fukushima caesium isotopes off the US coast. The models tell us that some time this winter we’ll be seeing them arrive on the coast.

I was caught by surprise, in a way, when there was concern about the arrival of the radioactive plume as it moves across the Pacific. Largely, that is related to public misunderstanding of what levels are considered a concern, and what levels shouldn’t be. I certainly don’t believe the levels we’re going to see on the west coast of North America should be of health concern. The human-exposure issues are more for the workers and people moving back into their homes on land. For the ocean it becomes quickly a fisheries issue.

What were the results of the tests that have been done on fish, some of which wandered from one side of the ocean to the other?

The bluefin tuna off San Diego, California, carried Fukushima caesium. The estimate was that someone who eats five times the amount of fish that an average American does, and eat only contaminated tuna for a year, would end up with a dose that would cause an extra two cancers in ten million people. The risk was not zero, but it was very small. It was hundreds of times less than the risk from polonium-210, the natural isotope that’s in seafood — and that we don’t think about1.

What do you hope to gain from the crowd-sourcing project?

There’s a science motivation and there’s also a public concern. And there’s a teachable moment: people can learn about radioactivity. The world we live in is radioactive — the rocks, the air, the waters. What are those levels? What is safe?

As a scientist, it’s about getting data that we can use to calibrate some of these models — the arrival times and predictions of what’s happening on the coast. We’ll actually have data to address that even if it’s below health concern. Because many countries have nuclear reactors on their coasts, things like this might happen again. There’s value in studying this, even if it’s safe.

A lot of articles online have linked the Fukushima spills to events such as starfish die-offs near California. What is your response to them?

There’s been a lot of undue alarm. In some terms it’s like shouting fire in a crowded theatre. It should be stopped. It’s not accurate. Radioactivity can cause harm and genetic damage, but not at the levels we’re expecting. A lot of those reports of effects on the US west coast were even before this radioactivity showed up. How does that work? It hasn’t even shown up on our coast.

I certainly wouldn’t change my behaviour, stop swimming in the Pacific or stop eating seafood.