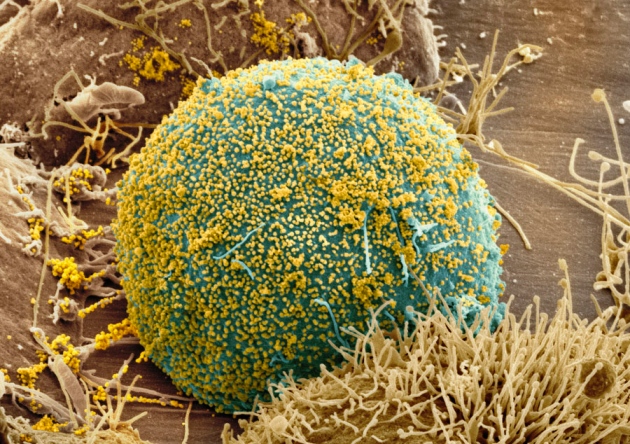 The HIV virus (yellow particles), seen on a white blood cell in this scanning electron micrograph.

Scientists have uncovered two new cases of HIV patients in whom the virus has become undetectable.

The two patients, both Australian men, became apparently HIV-free after receiving stem cells to treat cancer. They are still on antiretroviral therapy (ART) “as a precaution”, but those drugs alone could not be responsible for bringing the virus to such low levels, says David Cooper, director of the Kirby Institute at the University of New South Wales in Sydney, who led the discovery. A year ago, a different group of researchers had reported cases with a similar outcome.

Cooper presented details of the cases today at a press briefing in Melbourne, Australia, where delegates are convening for next week's 20th International AIDS Conference. The announcement came just a day after the news that at least six people heading to the conference died when a Malaysia Airlines flight was shot down in Ukraine.

Cooper began searching for patients who had been purged of the HIV virus after attending a presentation by a US team last year at a conference of the International AIDS Society in Kuala Lumpur. At that meeting, researchers from Brigham and Women’s Hospital in Boston, Massachusetts, reported that two patients who had received stem-cell transplants were virus-free.

Cooper and his collaborators scanned the archives of St Vincent’s hospital in Sydney, one of the largest bone-marrow centres in Australia. “We went back and looked whether we had transplanted [on] any HIV-positive patients, and found these two,” says Cooper.

The first patient had received a bone-marrow transplant for non-Hodgkin's lymphoma in 2011. His replacement stem cells came from a donor who carried one copy of a gene thought to afford protection against the virus. The other had been treated for leukaemia in 2012.

Unfortunately, several months after the 'Boston' patients stopped taking ART, the virus returned. An infant born with HIV in Mississippi who received antiretroviral therapy soon after birth, then stopped it for more than three years, was thought to have been cured, but has had the virus rebound, too.

At the moment, there is only one person in the world who is still considered cured of HIV: Timothy Ray Brown, the 'Berlin patient', who received a bone-marrow transplant and has had no signs of the virus in his blood for six years without ART. The bone marrow received by the Berlin patient came from a donor who happened to have a natural genetic resistance to his strain of HIV.

“It is very possible that the Australian men would relapse if they were to stop antiretroviral therapy,” says Timothy Henrich, an infectious-disease specialist at Brigham and Women’s Hospital who helped to treat the Boston men.

Because of the risk of relapse, Cooper’s team will not claim that their patients are cured. But, he says, the results show that “there is something about bone-marrow transplantation in people with HIV that has an anti-HIV reservoir effect, such that the reservoirs go down to very low levels. And if we can understand what that is and how that happens, it will really accelerate the field of cure search”.

Stem-cell transplant in itself cannot be used as a routine HIV treatment, because of the high mortality (10%) associated with the procedure. An important next step will be to find more such cases and compare them, says Cooper, to try to identify where the virus might be hiding. “These patients are very precious examples to help us understand how we might manipulate the immune system to drive the reservoir down to these extraordinary low levels.”

Henrich says that a larger pool of patients will provide a better understanding of how the immune system can be harnessed to fight HIV, adding that there could be many more people around the world whose virus has become undetectable. “I think the main finding is further confirmation that transplant can reduce the level of virus in peripheral blood to a level which is undetectable by research [tests],” he says.

Gero Hütter, a haematologist now at Heidelberg University in Germany who performed the transplant on the Berlin patient, says that his case “taught us that a cure could be possible. This is an important motivation to go on in this direction but it does not mean that we will reach this goal for all patients. HIV is still an incalculable enemy, so there might be limitations that we are not aware of now.”