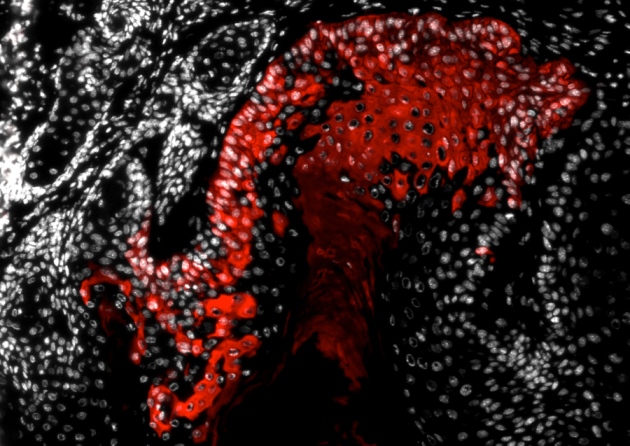 For the first time, researchers can trace cell lineage within a growing tumour. In this skin tumour, the cells labelled red all arose from a single stem cell.

Cancer researchers can sequence tumour cells’ genomes, scan them for strange gene activity, profile their contents for telltale proteins and study their growth in laboratory dishes. What they have not been able to do is track errant cells doing what is more relevant to patients: forming tumours. Now three groups studying tumours in mice have done exactly that1–3. Their results support the ideas that a small subset of cells drives tumour growth and that curing cancer may require those cells to be eliminated.

It is too soon to know whether these results — obtained for tumours of the brain, the gut and the skin — will apply to other cancers, says Luis Parada at the University of Texas Southwestern Medical Center in Dallas, who led the brain study2. But if they do, he says, “there is going to be a paradigm shift in the way that chemotherapy efficacy is evaluated and how therapeutics are developed”. Instead of testing whether a therapy shrinks a tumour, for instance, researchers would assess whether it kills the right sorts of cell.

Underlying this scenario is the compelling but controversial hypothesis that many tumours are fuelled by ‘cancer stem cells’ that produce the other types of cancer cell, just as ordinary stem cells produce normal tissues. Previous studies have tested this idea by sorting cells from a cancer biopsy into subsets on the basis of factors such as cell-surface markers, and injecting them into laboratory mice. In principle, those cells that generate new tumours are the cancer stem cells. But sceptics point out that transplantation removes cells from their natural environment and may change their behaviour. “You can see what a cell can do, but not what cells actually do,” says Cédric Blanpain of the Free University of Brussels, who co-led the skin study1.

All three research groups tried to address this knowledge gap by using genetic techniques to track cells. Parada and his co-workers began by testing whether a genetic marker that labels healthy adult neural stem cells but not their more specialized descendents might also label cancer stem cells in glioblastoma, a type of brain cancer. When they did so, they found that all tumours contained at least a few labelled cells — presumably stem cells. Tumours also contained many unlabelled cells2. The unlabelled cells could be killed with standard chemotherapy, but the tumours quickly returned. Further experiments showed that the unlabelled cells originated from labelled predecessors. When chemotherapy was paired with a genetic trick to suppress the labelled cells, Parada says, the tumours shrank back into “residual vestiges” that did not resemble glioblastoma.

Meanwhile, Hans Clevers, a stem-cell biologist at the Hubrecht Institute in Utrecht, the Netherlands, and his colleagues focused on the gut. They had previously shown that a genetic marker that labels healthy gut stem cells also labels stem cells in benign intestinal tumours, which are precursors of cancer4. In their latest study3, he and his team engineered mice to carry a gene for a drug-inducible marker that, when activated, causes labelled cells to make molecules that fluoresce one of four colours. This experiment yielded single-colour tumours consisting of several cell types, suggesting that each tumour arose from a single stem cell. To check that stem cells continued to fuel the tumours, Clevers added a second, low dose of the drug, triggering a few of the stem cells to change colour. This produced streams of cells in the new colour, showing that stem cells were consistently producing the other cell types.

For the skin study, Blanpain and his group labelled individual tumour cells, without targeting stem cells specifically1. They found that cells showed two distinct patterns of division: they either produced a handful of cells before petering out, or went on to produce many cells. Once again, the results pointed to a distinct subset of cells as the engine of tumour growth. What’s more, as tumours became more aggressive, they were more likely to produce new stem cells — which can divide indefinitely — and less likely to produce differentiated cells, which can divide only a limited number of times. That could be a key to halting tumour development early, says Blanpain. Rather than eradicating cancer stem cells, for example, therapies could try to coax them to differentiate into non-dividing cells.

The papers provide clear experimental evidence that cancer stem cells exist, says Robert Weinberg, a cancer researcher at the Whitehead Institute in Cambridge, Massachusetts. “They have made a major contribution to validating the concept of cancer stem cells,” he says. But cancer cells probably also act in more complex ways than those observed, he warns. For example, non-stem cells within the tumour might de-differentiate into stem cells.

The next step, the three groups say, is figuring out how the cells tracked in these experiments relate to putative cancer stem cells identified by years of transplantation studies. Researchers are already busy hunting for ways to kill these cells; now they have more tools to tell whether such a strategy will work.