Three common chemotherapy drugs cause DNA mutations not only in mice that receive treatment, but also in their offspring, according to a study published today in the Proceedings of the National Academy of Sciences USA1.

The results suggest that the genome in treated mice became destabilized yielding new mutations long after exposure to the drugs has ceased. A similar phenomenon has been observed in mice exposed to radiation. 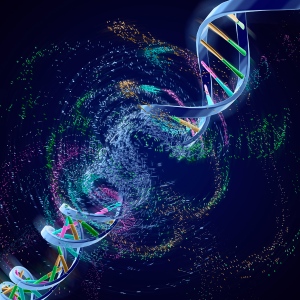 Genomic damage can be seen in the offspring of mice who have received chemotherapy drugs.

The work emphasizes the importance of looking at the effects of chemotherapy not only on recipients, but also on their descendants. But Yuri Dubrova, a geneticist at the University of Leicester, UK, who led the study, cautions against extrapolating the results of this study to humans. Most adults treated for cancer are either too old to have children or become sterile from the treatment. “So we’re talking about one group only: childhood cancer survivors,” says Dubrova.

One recent study found no significant impact of radiation or chemotherapy on the rate of birth defects in 4,699 children of childhood cancer survivors2.

Furthermore, children who are treated for cancer will not have children of their own for years or decades afterwards. Mice only live about two years, and the ones in Dubrova’s study reproduced a few months after their exposure to the drugs. “I would be very careful in interpreting this data,” Dubrova says.

Genome instability has intrigued Dubrova for more than a decade. Dubrova and his colleagues were studying the effects of radiation when, purely by chance, they decided to look at mutation rates in the offspring of exposed mice. “What we found was the biggest surprise of my life,” he says. The children had several times more mutations in their eggs and sperm than their radiation-treated parents3. “The genomes were unstable, and we still don’t know why,” Dubrova says.

Since then, he and his team have gone on to look at whether mutation-causing chemicals produce the same effects. The effects of chemotherapy could be more dramatic, they reasoned, because cancer-free regions of the body are often shielded from radiation therapy, but chemotherapies are generally given systemically, and can affect many tissues of the body, especially those containing dividing cells where DNA is rapidly replicating.

For the latest study, the researchers looked at the effects of three common chemotherapies — cyclophosphamide, mitomycin C and procarbazine, at doses comparable to those used to treat cancers in people — on a single region in the mouse genome containing a short, repeated DNA sequence.

Mutations in this region were twice as common in the offspring of treated males than they were in either parent. And the mutations appeared in DNA inherited from the exposed father and the untreated mother alike.

The results are intriguing, says Joe O’Sullivan, a radiation oncologist at Queen’s University in Belfast, particularly because the chemotherapies used in Dubrova’s study cause different forms of DNA damage than ionizing radiation, which snaps strands of DNA in two, but the two forms of damage have similar effects.

In recent years, researchers have begun to investigate the ‘bystander effect’, in which cells that do not directly receive radiation show signs of radiation-induced changes. It’s possible that some of these effects — perhaps linked to signalling between cells — could contribute to the heritable genomic instability seen in response to radiation and, now, chemotherapy, O’Sullivan notes.

But he also cautions against reading too much into the implications for humans who receive chemotherapy treatments, noting that that the few who do go on to have children are generally asked to wait at least a year after treatment before doing so. “It’s something we’ve generally advised for a long time,” he says, “even though we haven’t had much evidence to back it up.”