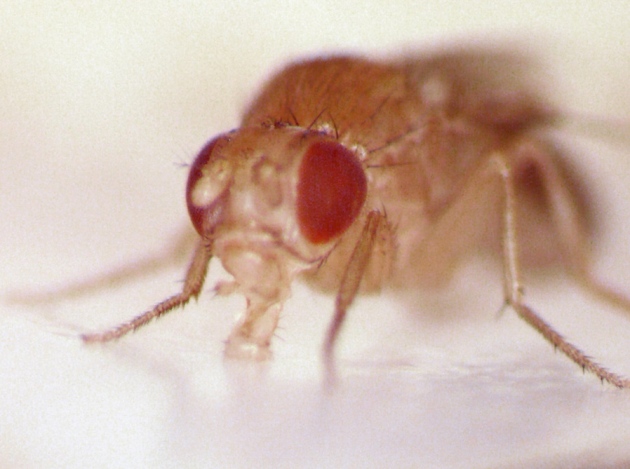 A cancer drug that boosts the lifespan of fruit flies is the latest addition to a small roster of compounds shown to lengthen life — although none has yet been proven in humans.

Trametinib (Mekinist), which was developed by the London-based pharmaceutical firm GlaxoSmithKline, is already used to treat advanced melanoma. It extends the lifespan of adult fruit flies by about 12%, although the later in life the drug is started, the less effect it has, says Linda Partridge, a geneticist at University College London and the Max Planck Institute for Biology of Ageing in Cologne, Germany, who led the work. Her team’s research is reported on 25 June in Cell1.

But Partridge cautions against rushing to take trametinib in search of a longer life. “That would be mad,” she says. “We just don’t know enough about the long-term consequences.”

Trametinib’s effects are connected to a biochemical pathway controlled by a family of proteins collectively called Ras which seem to be important to both cancer and ageing. They are activated when cells need to grow and proliferate, for example to replace damaged tissue. Mutations in the proteins are associated with cancer — which has led to a decades-long pursuit of drugs that target Ras.

At the same time, Ras proteins are involved in other pathways that have been firmly linked to ageing. In yeast, deleting a gene for Ras extends lifespan2, notes Valter Longo, director of the University of Southern California’s Longevity Institute in Los Angeles.

And Partridge’s team showed that trametinib’s benefits in fruit flies depended on suppressing a pathway regulated by Ras. Flies genetically modified to have this pathway permanently switched on did not live longer on trametinib.

Partridge hopes to extend her Ras studies to mammalian cells grown in culture and to mice. “We don’t know in mammals at the moment what the situation is,” she says. Although many of Ras’s functions are similar in flies and mammals, Partridge notes that cellular pathways in mammals are often more complex than the analogous pathways in flies, with multiple alternative routes available to compensate if one branch of the pathway is shut down.

The field of ageing research is littered with claims that tweaking the activity of one protein or another can lengthen lifespan, but many such results are not reproducible, says Partridge, who has called for a tightening of standards3. Often, she says, confusion is caused by unappreciated variations in the genetic backgrounds of the animals being studied, or the impact of subtle environmental variations on longevity. In the Cell study, her team was bogged down for months puzzling over inconsistent data, before finding that the flies were affected by variations in batches of yeast used to prepare their food.

Other compounds that have shown promise include the immune-suppressing drug rapamycin, which has extended the lifespans of mice. Researchers also hope to assess the anti-ageing effects of a diabetes drug called metformin in human trials.

But Longo agrees with Partridge that it is much too soon for healthy people to start taking trametinib in search of a fountain of youth. He knows people, some of them physicians, who have decided to take rapamycin despite its side effects (including insulin resistance and diabetes) and the lack of evidence that the drug allows humans to live longer. Doing the same with trametinib would be particularly alarming, he says. “Going after such a central pathway in every cell of the human body: that’s pretty scary,” says Longo. “Don’t do it at home.”