The mystery of how mutations in a gene called isocitrate dehydrogenase 1 (IDH1) cause brain cancer and leukaemia is beginning to be unravelled. Researchers have discovered that the mutations cause the production of an enzyme that can reconfigure on–off switches across the genome and stop cells from differentiating.

The findings, published in three papers today in Nature1–3, could be used in the development of drugs for cancers with these mutations — a search that is already under way in many pharmaceutical companies. 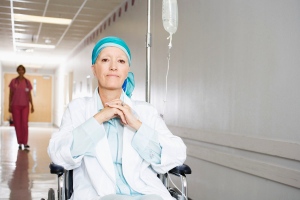 Some cancer patients could benefit from new treatments that target mutations in the isocitrate dehydrogenase 1 gene.

IDH1 acts in an energy-generating pathway known as the citric-acid cycle, and the IDH1 mutations associated with cancer cause a metabolite called 2-hydroxyglutarate to accumulate. The mutations were identified through several cancer genome projects as part as a surge of interest in understanding and harnessing the unusual metabolism of cancer cells.

The field has grown so hot that a company focused on targeting cancer metabolism, Agios Pharmaceuticals in Cambridge, Massachusetts, raised more than US$260 million from investors before any of its compounds reached clinical trials. Late last year, the company, one of those racing to find drugs that target mutant IDH1, became the subject of a high-profile lawsuit when the Abramson Family Cancer Research Institute in Philadelphia accused former employee Craig Thompson of founding the company to pursue findings he made at the institute without notifying institute officials. Thompson, now president of the Memorial Sloan-Kettering Cancer Center in New York, is a coauthor on two of the three Nature papers published today2, 3, but was not available for comment.

But despite this attention, the relevance of cancer’s unorthodox metabolism long remained unclear. “There has been a debate for nearly a century,” says William Kaelin, an oncologist at the Dana-Farber Cancer Institute in Boston, Massachusetts, and an author on one of the papers1. “Is altered metabolism a cause or a consequence of cancer?”

And although IDH1 mutations are found in multiple cancers, including more than 70% of a type of brain tumour called low-grade glioma — researchers are struggling to work out how the changes contribute to cancer. “For years people have tried,” says Timothy Chan, a radiation oncologist at the Memorial Sloan-Kettering Cancer Center, and an author of the same two papers as Thompson2, 3. “We were really perplexed as to what mutant IDH1 was really doing, and how it leads to cancer.”

Researchers have now identified several ways in which IDH1 mutations contribute to disease. Kaelin and his colleagues found1 that the form of 2-hydroxyglutarate that accumulates in IDH1-mutant cancer cells promotes cell growth by inhibiting the activity of a protein called hypoxia inducible factor (HIF), which can sometimes suppress tumours.

Chan and his coworkers showed2 that IDH1 mutations unleash what Chan calls “epigenetic chaos” by interfering with an enzyme that regulates the deposition of methyl groups on DNA. This ‘methylation’ can switch gene expression on and off. “It’s one mutation but it can reconfigure the on–off switches across the whole genome,” says Chan.

And Thompson, Chan and their colleagues showed3 that changing the methylation state of crucial DNA–protein complexes called histones prevents cells from differentiating. A lack of differentiation is a hallmark of cancer cells.

“This work shows that indeed there is a causal relationship between the mutation and those methylation changes,” says van den Bent. “One gets the feeling that we are getting closer to the dream of developing a treatment for IDH1-mutant cancers.”