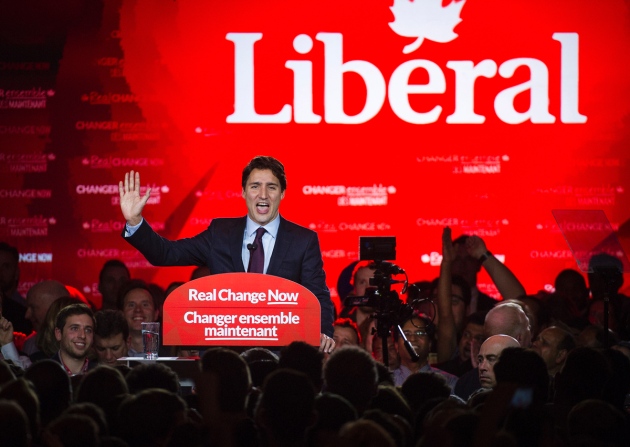 Justin Trudeau will be Canada's next prime minister.

Canada’s middle-left Liberal party won a stunning victory on 19 October, unseating the ruling Conservative party after a tight three-way race. Researchers are hoping that the country’s new prime minister, Justin Trudeau, will help to restore government support for basic research and the country's tradition of environmentalism.

The Liberals have promised to amend some of the damage done to science and evidence-based policymaking in Canada under the Conservative government, which came into power in 2006. Under former Conservative prime minister Stephen Harper, research funding shifted to focus on applied science, many jobs and research centres were cut and the nation gained an international reputation for obstructing climate-change negotiations.

Trudeau has promised to reverse funding cuts to government ocean-science and ocean-monitoring programmes; install a Chief Science Officer to advise government; make government research more accessible to the public; and bring back the country's compulsory long-form census, on which many social scientists relied for data until it was cut by Harper in 2010. “It’s a real turnaround for Canada,” says Wendy Palen, an aquatic ecologist at Simon Fraser University in Burnaby, Canada, and a board member of the non-profit group Evidence for Democracy (E4D) in Ottawa.

Scientists must now wait and see how much is actually done. “Talk is cheap, and political rhetoric especially cheap,” says Scott Findlay, co-founder of E4D and a biologist at the University of Ottawa. He adds that the science programme of the Liberal party's more left-leaning competitor, the New Democratic Party (NDP), was in some respects “more ambitious”. So it is perhaps a shame, he says, that the Liberals won by such a wide margin: “Now there’s no incentive to work with the NDP on any files.”

The Liberals have made no promises regarding overall science funding or the balance between pure and applied research. Most funding promises have been focused on the environment, health or economic development, notes Findlay. The Liberals have pledged to invest Can$200 million (US$154.4 million) in innovation and clean technologies in the forestry, fisheries, mining, energy and agricultural sectors; spend Can$20 billion over 10 years on greener infrastructure; issue 'Green Bonds' to fund environmentally friendly energy projects; and put Can$2 billion into a Low Carbon Economy Trust, which will give funding to projects that reduce carbon emissions. For comparison, overall federal science and technology investment in 2014–15 was Can$10.28 billion.

With the next round of international climate talks scheduled to take place in Paris in December, many are hoping that Trudeau will prove more proactive than Harper at controlling emissions and regulating the oil-and-gas industry.

In May, the Conservative government set an emissions target of 30% below 2005 levels by 2030, putting Canada's pledge unusually far behind those of the United States and the European Union. Harper had in 2009 set a target of 17% below 2005 levels by 2020, in step with US promises. But the government’s own 2014 projections showed this would be missed by a wide margin. Analysts say that even unambitious targets might be hard to meet given the booming business of Alberta’s tar sands and a lack of regulatory action.

Earlier this month, Mark Jaccard, an economist at Simon Fraser University, issued a scathing review concluding that “the federal government has done virtually nothing to reduce emissions”. A 2012 federal regulation for coal-fired power plants, for example, would affect only new plants that are not expected to come online until at least 2020.

“Harper has been a disaster,” says Jaccard. He would like to see the Liberal federal government push the provinces to join California’s cap-and-trade carbon programme, as Quebec has done already and as Ontario plans to do. Trudeau has said that he supports a national emissions target but would allow each province to decide how to price carbon to meet that goal.

Others are pleased that the Liberal government has promised to overhaul the environmental-assessment process for oil-pipeline projects, so that they include greenhouse-gas emissions from the oil's extraction and use. “That’s huge,” says Carol Linnit, an environmental-policy analyst for the non-profit environmental group DeSmog Canada in Vancouver. The Liberal party is in favour of the controversial Keystone XL pipeline project planned to take oil from Alberta to the United States.

“Acting on climate is going to be really hard. It’s a ‘dirty-slate’ problem; everyone is operating under incredibly imperfect conditions,” says Linnit. But the Liberals, she adds, have made “a good start. It’s a heck of a lot more than the Conservatives were doing”.