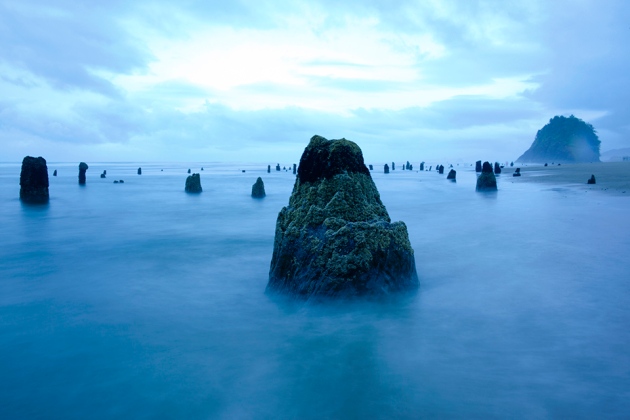 An earthquake-triggered tsunami is thought to have drowned this Pacific Northwest forest 2,000 years ago.

On 15 June, Canada broke ground on an offshore earthquake early-warning system. Sea-floor sensors will monitor the Cascadia subduction zone off British Columbia to provide crucial seconds of warning if the ‘big one’ hits. Putting sensors so close to the fault should give the Canadian system an edge over a more developed sister project in the United States.

To produce early warnings of quakes, scientists rely on a network of seismometers and accelerometers to detect the tremor’s first, non-destructive primary (P) waves. Those waves travel faster than the destructive secondary (S) waves, and so hit cities seconds to minutes earlier. The closer that detectors are to the source of an earthquake, the more warning they can provide. That time can be used to stop high-speed trains, shut down nuclear reactors and tell the general population to brace for shaking. But with offshore faults, getting close to the action means putting sensors under water, which is very expensive.

Japan pioneered earthquake early warnings. The country has had a system to stop bullet trains since the 1960s, and public warnings have been issued since 2007. During the magnitude-9 Tohoku earthquake of March 2011, residents of Sendai, the major city nearest to the epicentre, got 15 seconds of warning; Tokyo got more than a minute. Japan added data from an array of undersea seismometers to its earthquake early-warning system in August 2011, and a second phase of that project was completed in March, more than doubling the number of offshore detectors to 50. Now, the country is working on an ambitious 150-station network called S-net. Connected by 5,700 kilometres of cable, it could provide up to an extra 30 seconds of warning for a large offshore quake.

The United States and Canada have lagged far behind Japan, despite the fact that the Cascadia subduction zone off North America’s west coast is expected to one day produce a catastrophic ‘megathrust’ quake similar to the Tohoku one.

By the end of June, the research non-profit group Ocean Networks Canada (ONC) in Victoria plans to have installed three accelerometers on its NEPTUNE sea-floor observatory, which consists of more than 840 kilometres of ocean-bottom cable looped out past the Cascadia fault (see ‘Quake watch’). “I took this job and asked, ‘Why aren’t we doing earthquake early warning?’” says ONC president Kate Moran, who joined the organization in 2011 as director of NEPTUNE. 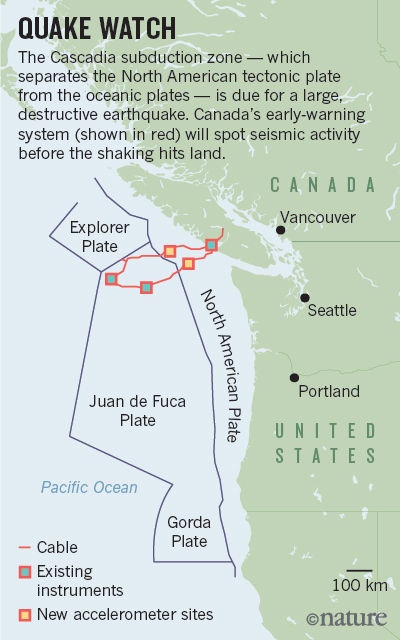 The network already has a handful of seismometers, but these send data back in packets instead of instantaneously, and the information is subject to censorship by the navy. As such, Moran says, they are ill-suited for an early-warning system. The new accelerometers, which have a simpler data stream designed to circumvent these issues, were made possible by a Can$5-million (US$3.9‑million) grant from the British Columbia govern­ment in February.

The team is also hoping to install a tilt­meter down a 300-metre borehole, to detect slow, almost imperceptible movement of the tectonic plates at the fault. Clusters of such slow-slip events occurred before the 2011 Japan quake, and detecting them might help seismologists to track the strain that is building on the fault.

Moran anticipates that within 5 years, the ONC will have 40 accelerometers on- and offshore to produce public early warnings. The instruments will be positioned specifically to detect an earthquake resulting from a subduction-zone tremor. Spotting quakes from other faults, which would be smaller but potentially much closer to cities, would require a significantly denser network of accelerometers.

On the US west coast, a network of onshore accelerometers can already alert a select group of users — such as the Bay Area Rapid Transit system in northern California — to the early rumbles of earthquakes. That prototype programme, called ShakeAlert, is hoping to get its information to a wider audience soon. “I think we’re really now, finally, at the beginning of rolling out a public system, after years of trying to get funding,” says ShakeAlert lead Richard Allen, a seismologist at the University of California, Berkeley, who anticipates issuing public alerts within five years. ShakeAlert got its first congressional funding in December 2014, and now has about half the funds it needs for a full system, says Allen. To reliably detect quakes from multiple fault lines, Allen reckons that the network needs about 1,100 detectors just in California, where it currently has about 500.

The US National Science Foundation supports a handful of wired sea-floor seismometers off the coast of Oregon as part of its Ocean Observatories Initiative. But these sensors have the same problems as the current Canadian ones, says Martin Heesemann, a marine geoscientist with the ONC. He adds that the group’s new accelerometers will be the only instruments on North America’s megathrust fault designed specifically for early warning rather than research.

The offshore Canadian system “will totally be better” than the US system, says Moran with a laugh. “It’s nice to be better than the United States.”

This story incorrectly stated that the earthquake warning system being developed by Ocean Networks Canada would be the first in Canada. The text has now been corrected.