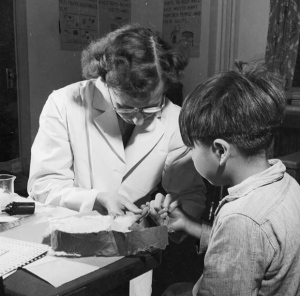 Canadian government scientists used malnourished native populations as unwitting subjects in experiments conducted in the 1940s and 1950s to test nutritional interventions. The tests, many of which involved children at state-funded residential schools, had been largely forgotten until they were described earlier this month in the journal Social History1 by Ian Mosby, who studies the history of food and nutrition at the University of Guelph in Canada.

The work began in 1942, when government scientists visited several native communities in northern Manitoba and discovered widespread hunger and malnutrition. “Their immediate response was to study the problem by testing nutritional supplements,” says Mosby. From a group of 300 malnourished people selected for the tests, 125 were given vitamin supplements, and the rest served as 'untreated' controls.

A set of similar experiments began in 1947, after government inspectors found that malnutrition was rife in state-funded, church-run boarding schools — which native children, as wards of the state, were required to attend. Over the next five years, the researchers used nearly 1,000 children at six schools to study nutritional interventions.

In one school, where it was found that students were receiving less than half the daily recommended intake of milk, the researchers tested the effects of tripling the children's milk allowance — but only after keeping it at the same, low level for two more years to establish a baseline against which to compare the effects. At another school, the researchers ran a randomized, double-blind controlled trial — giving one group vitamin C supplements and the other a placebo — again after a two-year baseline period. Children at a third were given bread made with a type of fortified flour that was not approved for sale in Canada; many of them later developed anaemia. The researchers also prevented the children at all six schools from receiving preventive dental care, because oral health was a parameter used to assess nutrition.

Nancy Walton, a medical ethicist at Ryerson University in Toronto, Ontario, and former chairwoman of the university’s research-ethics board, says that such a project would never be allowed today, “but in the context of that time, it’s unfortunately not surprising”. Awareness of the need for informed consent in human studies was growing — informed consent was a central tenet of the Nuremberg Code, developed in the late 1940s — but the idea had not yet been adopted around the world.

“It’s not just bad ethics, it’s bad science,” Walton says of the Canadian government research. “They didn’t appear to try and prove or disprove any hypothesis that I can see, or make any statistical correlations.”

Indeed, says Mosby, very little of value came out of the research. He found no evidence that the northern Manitoba study was completed or published. The school experiments were presented at conferences and published, but they led to no important advances in nutritional science or improvements in conditions at the schools. “They mostly just confirmed what they already knew,” Mosby says.

The Assembly of First Nations, which represents Canada’s indigenous peoples, has demanded that the government release any information it has about these studies, including whether any other, similar experiments were done. A spokeswoman for Bernard Valcourt, Canada's aboriginal affairs minister, called the experiments "abhorrent", and said the department had turned over 900 documents related to the studies to a commission that is investigating the residential schools system.