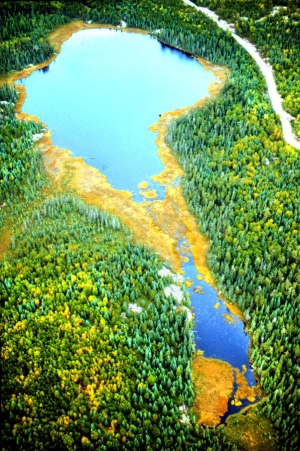 Canada's Experimental Lakes Area has been used to study the effects of pollutants such as mercury since 1968.

The Canadian government has cancelled its funding for the Experimental Lakes Area (ELA), a research site in northwestern Ontario that has led to the re-shaping of international policies. It is the latest target in a string of research programmes to have been scaled back, shut down or left in limbo in the wake of massive cuts to this year’s federal budget.

Fisheries and Oceans Canada — the government department that runs the site —  told its staff on 17 May that the ELA, a collection of 58 remote lakes and a laboratory complex, would be shut down in March 2013. “It is completely shocking,” says Jim Elser, an aquatic ecologist at Arizona State University in Tempe, who ran experiments at the site in the 1990s. “It is sort of like the US government shutting down Los Alamos — its most important nuclear-physics site — or taking the world’s best telescope and turning it off.”

The ELA has attracted scientists from around the world to its shores since field research started there in 1968. It is possibly the only place where aquatic scientists can use lakes and their ecosystems as test tubes as well as having access to long-term environmental data and a decent place to sleep and eat.

Many scientists say that the government is making a mistake. “If you try to base policy on small-scale experiments you miss some key ecosystem process, and that can have huge implications,” says David Schindler, a freshwater scientist at the University of Alberta, who founded the ELA and ran it until 1989.

Scientists have manipulated the area’s lakes to show how acid rain destroys lake ecosystems1, how the ingredients found in birth-control pills can cause the collapse of fish populations2 and how wetland flooding for hydroelectric dams leads to increased production in methyl mercury and greenhouse gases3, while unmanipulated lakes have provided long-term comparative data. Studies done there have influenced policy, most notably the creation of an air quality agreement between the United States and Canada in 1991, which led to reductions in acid rain.

Spokeswoman for Fisheries and Oceans Canada Melanie Carkner says that the department “will no longer conduct research that requires whole-lake or whole-ecosystem manipulation”. However, it will try to transfer operations for the site to a university or another private organization, she says. Scientists say that the department has tried to offload the ELA before, under both Liberal and Conservative governments.

Others point out that universities don’t have the funds readily available to take over the site, and the one funding scheme that could have helped has been placed on hold. In April, the Natural Sciences and Engineering Research Council of Canada announced that it would no longer be accepting applications to its Major Resources Support Program, which issues grants to keep major research facilities operating. In 2011–12, it awarded $38 million to 47 organizations, helping them to cover costs such as support-staff salaries, electricity bills and fuel costs.

The freezing of the resources funding will also hit other environmental research stations. If the funding is not renewed, “we will have to raise user fees”, says Brad Anholt, director of the Bamfield Marine Sciences Centre, located on Vancouver Island, which receives roughly one-third of its annual research budget from the programme. “I don’t know by how much, but it will be a lot,” he says.

A spokeswoman for science minister Gary Goodyear says that the moratorium on future competitions is temporary and part of a review of more than 60 funding programmes. The government will begin consultations with the research community in six months to a year, she adds.

The federal budget released in March contained lots of bad news for environmental research. The omnibus bill that would implement it waters down several environmental policies, including the Canadian Environmental Assessment Act, the Fisheries Act and the Species at Risk Act, and scraps Canada’s commitments to the Kyoto Protocol (see 'Canadian budget bill undermines environment, critics charge'). It also cut funding to the National Round Table on the Environment and the Economy — an agency that provides advice on environment issues — a move that foreign affairs minister John Baird linked to the agency's support for a carbon tax. The streamlined budget also left a new Canadian Earth-observing satellite system in limbo (see 'Canadian satellite system under budget cloud'). The bill has passed its second reading and is now in the hands of the finance committee, with a special subcommittee examining its environmental regulations.