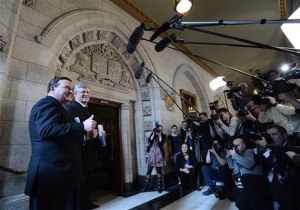 Canadian finance minister Jim Flaherty yesterday released the country's 2013 budget, calling it “a plan for jobs, growth and long-term prosperity”, words that will please some of the budget's main beneficiaries: those working in applied research. But for those who argue that investments in basic research are necessary for innovation and prosperity, “this is a really bad budget”, says James Turk, executive director of the Canadian Association of University Teachers in Ottawa, Ontario.

“There is a consistent pattern of steering money away from basic research,” says Turk. “More and more of it is being directed to company needs.”

No one expected major spending increases in this budget, as the Conservative government of Prime Minister Stephen Harper tries to eliminate the deficit by 2015 amid a dreary economic outlook. Yet the new budget, for the fiscal year from 1 April to 31 March, 2014, contains some small windfalls – especially for those doing applied research.

It includes a Can$225 million (US$225 million) boost for research infrastructure at universities through the Canada Foundation for Innovation. That money comes from interest accrued on the foundation’s endowment that the government is now releasing for use, says Turk. There is also an extra Can$37 million for the country’s three main granting agencies, but that money is earmarked for research partnerships with industry rather than basic research. The National Research Council, which runs most of the government’s research laboratories and is being restructured to focus more on business needs, will receive an extra Can$121 million over two years to “to help the growth of innovative businesses”.

The focus on commercialization of research is not unexpected, says Mehrdad Hariri, chief executive of the Canadian Science Policy Centre in Toronto, Ontario. “The government has made it very clear that they want to focus on business innovation,” he says. “This is an area where Canada has been slowing down.”

Last year's budget saw a flurry of cuts to environmental research programmes, including the planned closure of the Experimental Lakes Area research station in northwestern Ontario. But this year, the government offered some support for clean-energy companies. Sustainable Development Technology Canada, a foundation that supports clean-technology startup companies, will get Can$325 million over 8 years. This investment was welcomed by Clare Demerse, federal policy director at the Pembina Institute, an energy-policy think tank in Calgary. Although the money is less than half the investment that Pembina and others had called for, Demerse said in a statement that it would be a “lifeline” for the country’s estimated 700 clean-technology companies.

But the government’s relentless focus on business innovation does not represent a coherent science strategy, says Paul Dufour, director of Paulicy Works, a science-and-technology consultancy in Gatineau, Quebec. He notes that the budget makes no reference to a national science-and-technology strategy that Harper released in 2007. “We have to assume that it’s dead, and that the government has no strategy,” Dufour says.

Instead, Dufour says, there is a piecemeal approach, with the government “picking winners” and providing new money to the automotive, aerospace, forestry and aquaculture sectors. “It’s very short-term thinking,” he says.