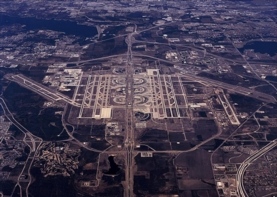 Thomas Eric Duncan’s family has been imprisoned in a borrowed home for a few weeks now, purportedly under police guard. This quarantine is an attempt to keep any Ebola virus from spreading further after their loved one died of the disease on 8 October.

That quarantine has not been applied to hospital workers who came into contact with Duncan on either his first visit to Texas Health Presbyterian Hospital in Dallas — when he was turned away — or his second visit two days later. To date, two of the medical workers who helped care for Duncan have now contracted Ebola, and one of them flew to Cleveland, Ohio, and back for the Columbus Day weekend before becoming symptomatic.

Just as air travel brought the Ebola virus to Dallas from Liberia, where the pandemic is spreading out of control, air travel could spread the virus throughout the US and the world by travellers who don’t know they are infected. Travel restrictions, isolation of the infected and quarantine of those known to have been in contact with the infected are a few of the measures that have been suggested for stopping that spread.

The director of the US Centers for Disease Control and Prevention (CDC) has the authority to impose such a travel ban between states to contain 'viral hemorrhagic fevers' such as Ebola. That authority, which then President George W. Bush put in place in 2000, has yet to be invoked or tested in court. Apprehending, detaining or even examining travellers has typically been confined solely to those travelling outside the US, not between Texas and Ohio. The CDC operates 20 quarantine stations for international travellers throughout the US, including one in Dallas.

The CDC is also in charge of a potential 'Do Not Board' passenger list for commercial airplanes (but not buses or trains). This listing has been used to keep 33 people with tuberculosis from flying in the US. But, in general, imposing and monitoring any quarantines or travel bans is left to the individual states. How much power state governments have to do so varies widely from one state to another. The laws that grant states these powers are old, having been instituted from 40 to 100 years ago, according to a Congressional Research Service report issued on 9 October.

The last legal test of the constitutionality of such a quarantine came in 1902, when the US Supreme Court upheld the power of states to impose quarantines regardless of impact on interstate commerce. More recently, a federal district court in New York upheld the power of New York state to confine a patient with tuberculosis to a hospital against his will in 2003. The CDC is also authorized to step in if the agency feels local authorities — state, county or municipal — are failing to prevent the spread of disease, although that authority has yet to be tested.

Regardless of legal authority, people often attempt to evade quarantine. In the first year of the Do Not Board list's operation in 2008, two out of 33 people who were placed on the list because they had contracted tuberculosis attempted to fly anyway. Recently, journalist and doctor Nancy Snyderman violated her voluntary three-week quarantine in New Jersey after her travels to report on the epidemic in Africa, which had resulted in one of her cameramen contracting the Ebola virus. As a result, the New Jersey Department of Health made her quarantine mandatory. Violating a federal quarantine orders can result in fines of up to $100,000 or even a year's imprisonment.

International travel is more of a free-for-all. The World Health Organization considers east African countries such as Ethiopia and Kenya as "high risk of transmission" of the Ebola outbreak due to air links with west African nations Guinea, Liberia and Sierra Leone, the worst-afflicted countries. The virus has already travelled via infected people to Nigeria, Spain and the US.

Meanwhile, monitoring those who interacted with Duncan continues and will only end on 19 October, three weeks after he entered the hospital. And 31 October is when monitoring those who came into contact with his nurses will end. As Barry Hewlett, a medical anthropologist at Washington State University who has studied past Ebola outbreaks, says: "Trust is a major issue in outbreak containment."