Why a U.S. Army soldier suspected of killing 16 civilians in Afghanistan did what he did is still unclear, but one thing is certain: his lawyers are likely to invoke emerging science about the effects of war on the brain to aid in his defense.

In fact, even before Staff Sgt. Robert Bales' identity was revealed, unnamed US officials were telling major news outlets that the suspect had suffered a traumatic brain injury, or TBI. Shortly thereafter, Bales’ lawyer publicly suggested that his client suffered from Post-Traumatic Stress Disorder (PTSD), even though it does not appear to have been previously diagnosed. 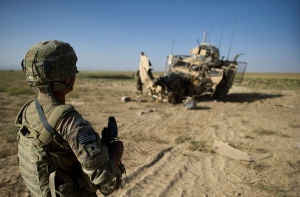 How much either TBI or PTSD could explain a pre-planned rampage is up for debate, however.

According to Dr. James Giordano, director of the Center for Neurotechnology Studies at the Potomac Institute for Policy Studies in Arlington, Virginia,  TBI manifests itself through a variety of complaints, which may range from mild to moderate. These could include disorientation, ringing in the ears, vertigo, and headaches, as well as a more profound constellation of severe neurological and psychological symptoms, such as impaired impulse control, acting out and aggressive behavior. “What we're seeing is that TBI presents as spectrum disorder with a variety of effects,” says Giordano.

In fact, some people make a complete recovery from TBI, while others develop more severe conditions down the road, and it’s difficult to predict which injuries will persist, according to Giordano. “One would think the milder the injury, the less severe the symptoms,” says Giordano. “That’s not always the case.”

The Pentagon estimates that over 230,000 troops have suffered some form of TBI over the past 10 years. That statistic, though shocking on its own, could also be understated, according to a RAND study, since many mild TBIs go unreported.

Along with a greater understanding about the extent of TBI injuries, there is also a growing body of evidence that many of these TBIs could lead to later emotional and cognitive problems, and even violent behavior.

Kevin Kit Parker, a biomedical engineering professor at Harvard University, points to ongoing work by the Veterans Administration looking at sports players who have suffered from TBI, many of whom suffered behavioral problems, or even violent outbursts, prior to their death. “This is long-noted in anecdotal data in professional athletes and in soldiers,” says Parker, who is working on research to understand the mechanisms that result in a TBI. “When someone has a brain injury, behavioral issues are often emergent after some period,” he says.

What kinds of issues depends on the part of the brain that is injured. So-called 'executive function problems' — which involve the ability to function and plan — are frequently seen when the injury affects the front lobes says David Hovda, director of the Brain Injury Research Center at the University of California, Los Angeles. “Frontal lobes are needed in order for us to act appropriately in public, or in a delicate situation, like a date,” says Hovda. “If we don’t have working frontal lobes, we may say and do things that are bizarre and inappropriate.”

And if the injury is in the right spot, it can also effect inhibitions, which can be linked to violent behavior, according to Hovda.

Of course, at issue with the killings in Afghanistan is whether the soldier might have succumbed to violent impulses because of his prior brain injury. On that point, most experts are hesitant to speculate on the specific case, but Hovda and others point out that the types of violent behavior that typically result from a TBI don’t seem to mesh with what is known about the Afghanistan killings, which have been described as methodical and pre-planned.

That may be why Bales’ lawyer is already talking about PTSD, which can lead to a much wider constellation of symptoms, including destructive behavior such drinking. Moreover, emerging research suggests that TBI makes the brain more susceptible to developing PTSD, delivering a sort of medical double-whammy with the potential for a wide array of symptomatic behavior.

Hovda suggest that the suspect’s lawyer could argue that the TBI contributed to PTSD, and as a result of PTSD, Bales became “depressed, anxious, angry at his environment, and took that out on other people.”

While a TBI could certainly contribute to violent behavior, to claim that a brain injury alone explains a methodical killing spree is “a bit of a stretch,” says Hovda.