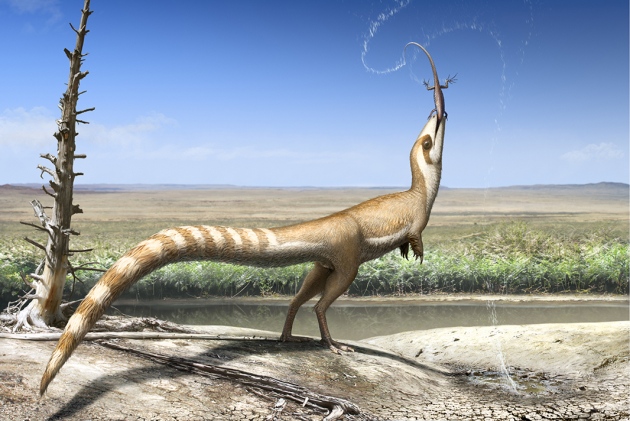 In 1996, a small, fluffy carnivore called Sinosauropteryx became the first dinosaur known to have had feathers. In 2010, it entered the ranks of the first dinosaurs to have their colour elucidated, when analysis1 suggested that it had a fetching tail of ginger-and-white stripes. Now, UK researchers have reconstructed the colour pattern across its entire body. Their findings reveal that Sinosauropteryx was countershaded — dark on top and light underneath. It also sported a ‘bandit’ mask on its face, resembling that of a raccoon.

“It’s a very common pattern in living birds and mammals,” says Jakob Vinther, a palaeobiologist at the University of Bristol, UK, who led the work. Dinosaurs evolved this pattern independently of living groups of birds and mammals, says Vinther, but the same evolutionary drivers were likely at work.

The results, published in Current Biology2 on 26 October, were based on three fossils of the 124-million-year-old species on which impressions of feathers and traces of pigmentation had been preserved. The specimens were found in China’s northeastern Liaoning Province.

The team used cross-polarized light, which reduces glare, and high-resolution photography to reveal details of Sinosauropteryx’s feathering and colouration that aren’t clearly visible to the naked eye. The researchers then created 3D models of the abdomen, and photographed them under different lighting conditions. Under direct light, the shadows that formed on the models more closely matched the dinosaur’s plumage patterns, when compared to shadows that formed under diffuse light, such as that found in a forested environment.

In living species, countershading masks the shape of the body to make animals less conspicuous to predators, but the specific pattern depends on the environment. By looking to living animals — such as some types of antelope — whose dark–light transition occurs relatively high on their flanks, the scientists determined that Sinosauropteryx probably lived in open habitat — perhaps a savannah rather than a forest, as has been previously suggested. This pattern better cancels out the ‘self-shadowing’ on the body that occurs in open environments with direct sunlight.

The most complete Sinosauropteryx specimen on which impressions of feathers and traces of pigmentation had been preserved.

Similarly to modern birds, dinosaurs in the early Cretaceous period, when Sinosauropteryx lived, probably had tetrachromatic vision, meaning that they could see four colours. This might have given them a significant advantage over today’s mammalian predators, which tend to have poorer vision. “Predators back then had excellent vision, and to camouflage yourself against such a predator, you had to have really good camouflage,” says Vinther. “And we can see some really intricate camouflage solutions in this little theropod dinosaur.”

Researchers were also curious about what purpose the Sinosauropteryx's bandit mask and striped tail might have served. In living species, multiple functions for bandit masks have been proposed, such as reducing glare — something that may have been useful to a species such as Sinosauropteryx, whose fossils were deposited in lakeside environments. The banded tail could have served to confuse predators, by drawing eyes away from more-vital parts of the animal.

A new era of imaging

Palaeontologist Xing Lida of the China University of Geosciences in Beijing, says that advanced microscope and photography techniques and 3D-imaging technologies are revolutionizing palaeontology. The latest paper “completely unravels [Sinosauropteryx’s] colour pattern”, revealing surprising variation across its body, he says.

This study and others are helping scientists to develop a much more complete picture of the Jehol Biota, the ecosystems of northeastern China in the early Cretaceous, around 133–120 million years ago, Xing adds.

Michael Pittman, a vertebrate palaeontologist at the University of Hong Kong, says that the team’s countershading hypothesis is intriguing and provides a lot of information about the ecology of the animal. “But it will be nice to see if it holds up with more specimens of Sinosauropteryx and across other theropods,” he says.

Vinther has been involved in two studies published in the past 18 months that revealed similar countershading in a small herbivore called Psittacosaurus3 and in the 1.3-tonne armoured ankylosaur Borealopelta4. Together with the latest paper, these studies have taken research into dinosaur colouration beyond simple assessments of appearance, to asking bigger questions about the ecology of Cretaceous ecosystems.

Already, Vinther’s team is looking to determine the colouration of other species. The Jehol Biota had many different theropods, he says. “It makes sense to try and look at a good number of them to paint a picture of how many were living in different habitats.” Dinosaurs that appear similar might in fact have been living in more-distinct habitats, which could explain the unusually high diversity of carnivorous species in the fossil record from that time and region, he says.