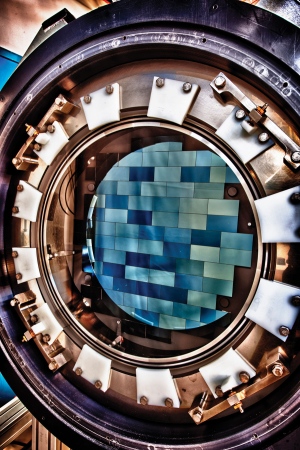 The Dark Energy Survey camera will investigate millions of galaxies for the subtle effects of weak lensing.

Even the best pictures of a distant galaxy are a bit lopsided. But this is an attribute, not a bug. Because mass distorts space-time, light coming from distant galaxies is bent as it passes through intervening shoals of invisible matter, leaving the images of these distant objects minutely sheared and stretched.

Two astronomical surveys now scheduled to come online seek to take advantage of this effect, which is known as weak gravitational lensing. The surveys aim to use the technique to get a firmer handle on dark energy, the mysterious force that is apparently speeding up the expansion of the Universe. By observing the patterns of distortions across large swathes of sky (see ‘Falling into line’), astronomers hope to map the density and distribution of dark matter, the web-like invisible scaffolding around which visible matter is thought to have first coalesced. Then, by looking at changes in this hidden web across cosmic time, they hope to discern the imprint of dark energy.

Observers already study the effects of dark energy by tracking cosmic landmarks: the standard candles of distant supernovae and the standard rulers of ripples in the distribution of galaxies. But those techniques reveal only how the Universe’s expansion rate has changed because of dark energy. Weak lensing offers an extra prize: the distortions hold clues to the action of gravity at far-off locales. The technique can thus address an increasingly pressing question for theorists: what if the Universe’s accelerated expansion is not the result of dark energy’s mysterious anti-gravitational force, but is instead a sign that gravity behaves differently in different parts of the Universe? 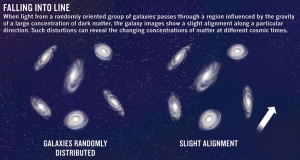 “It provides unfettered insight into the properties of gravity that we can’t get by other techniques,” says Rachel Bean, an astrophysicist at Cornell University in Ithaca, New York. “Its potential is massive, but so are the challenges.”

Unlike strong gravitational lensing, in which a major concentration of mass markedly distorts the image of a single galaxy, the subtle effects of weak lensing can be detected only in detailed surveys of millions of galaxies. One of the new efforts will use the Hyper Suprime-Cam (HSC), which achieved first light on 28 August on the 8.2-metre Subaru telescope in Hawaii. By 2018, it aims to have imaged 10 million galaxies over a 1,500-square-degree-swathe of the sky, says Satoshi Miyazaki of the National Astronomical Observatory of Japan in Mitaka, who is the principal investigator of the HSC survey.

A rival project, the Dark Energy Survey (DES), is set to start operating later this month on the 4-metre Blanco telescope in Chile, says its principal investigator, Josh Frieman of the Fermi National Accelerator Laboratory in Batavia, Illinois. Being the main project for the Blanco tele­scope, the DES will get more observing nights than the HSC, allowing it to image 300 million galaxies over 5,000 square degrees by 2018. But its smaller telescope means that it will not be able to peer as deeply into the distant Universe as the HSC survey.

Even with these massive digital cameras — 870 million pixels for the HSC and 570 million pixels for the DES — weak lensing “is a very, very difficult measurement to make”, says Bean. To detect the subtle distortions caused by lensing, for example, astronomers must subtract aberrations caused by the optics of the telescope and by Earth’s atmosphere.

Doing the measurements from space could help. The European Space Agency is planning to launch a dark-energy probe called Euclid in 2019. And in the United States, an as-yet-unfunded dark-energy mission called the Wide-Field Infrared Survey Telescope, which would dedicate much of its time to weak-lensing measurements, was ranked as the top priority for space-based astronomy in a 2010 decadal survey.

“The technique’s potential is massive, but so are the challenges.”

Some astronomers doubt that the technique can outperform supernova surveys and measurements of baryonic acoustic oscillations — ripples in cosmic structure dating from several hundred thousand years after the Big Bang. “I think the jury’s still out,” says David Schlegel, principal investigator of the Baryon Oscillation Spectroscopic Survey at the Lawrence Berkeley National Laboratory in Berkeley, California. He points out, for instance, that a key assumption in weak lensing — that galaxies are oriented randomly — is turning out not to be true, forcing astronomers to correct for a systematic effect.

But others say that it is important to take diverse approaches to the dark-energy mystery. Chris Stubbs, an astrophysicist at Harvard University in Cambridge, Massachusetts, says that, a decade ago, astronomers were intent on simply proving that the effect was real. Now there is little doubt, and they need techniques such as weak lensing to explore more-detailed questions — for instance, whether the effect varies with distance, direction or the density of matter, and whether the effects of dark energy can be distinguished from those of variable gravity. “We are only now entering an era where we’re attacking the dark-energy problem with instruments and experiments that were explicitly optimized for that purpose,” says Stubbs.