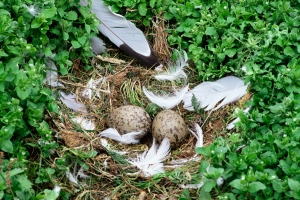 Eggs are often used to monitor for pollutants, but sampling methods may need to be improved.

Many scientists using the eggs of wild birds to monitor pollution levels are failing to properly standardize their work, according to a study led by Roland Klein, a biogeographer at Trier University in Germany.

Pollution-monitoring programmes often use birds' eggs because they are relatively easy to collect and the animals’ positions near the tops of their food chains means that if there are pollutants in the environment birds are likely to take them up. The studies are used to check the levels of pollutants such as flame retardants and mercury from the Arctic to Africa.

Klein and his team went through 86 peer-reviewed papers involving the collection of aquatic birds' eggs, published between 2002 and 2010, and found that information they view as vital was often missing — including details of sample collection, selection criteria for eggs and how the eggs were transported back to the lab1. All of these factors could influence the results obtained. The team also notes that in general “little attention” has been given to standardizing the collection and storage of eggs across the field.

Among the problems identified by the study are that only 45% of papers gave ages for collected eggs, only 41% listed the transport temperature and only 16% provided details of random sampling of nests. All of these factors could undermine the data gleaned from eggs, making comparisons between studies difficult or impossible, Klein says.

Although his team’s work does not quantify the variation that might result from not tackling these issues, Klein says that they do need to be addressed given the huge number of programmes that rely on the monitoring of birds' eggs. “We spend a lot of money on these things,” he notes.

Klein's group proposes some potential standards for the field, including collecting only freshly laid eggs, transporting eggs at approximately 5 ºC and measuring certain characteristics of eggs, including weight, volume and shell thickness.

Lee Walker and Richard Shore work on the UK’s Predatory Bird Monitoring Scheme2 at the Centre for Ecology & Hydrology in Lancaster. They note that collecting fresh eggs is not possible with birds such as raptors, because the need to conserve these species means that only abandoned or addled eggs can be taken.

“I don’t think we’d be able to get a licence to use fresh eggs,” says Walker, who adds that correcting for moisture loss in older eggs can be done relatively easily.

Shore says the paper is useful in highlighting a number of issues relating to quality control. However, he adds that a lack of standardization would mainly just contribute noise to the results, and unless this creates a systematic bias in one direction it won’t invalidate those results.

“They are valid points about minimizing variability,” he says. But, he adds, “I don’t think it’s a major problem.”

Christine Custer, a wildlife biologist at the US Geological Survey’s Upper Midwest Environmental Services Center in La Crosse, Wisconsin, maintains that there is more standardization in place than Klein's paper suggests. Many researchers use standard protocols, but details of them are rarely accepted in peer-review studies, usually to save space, she says. Therefore it is not surprising that Klein's analysis did not find this information in the literature.

In addition, Custer says that many of the standards proposed by Klein are of little importance. For example, for many organic compounds the age of the egg is not important because fresh eggs have the same sample concentrations as incubated, abandoned and failed eggs. In other cases there are established methods for adjusting contaminant concentrations to account for age.

"I think most folk in the field are sensible scientists," says Custer. "You're not going to spend a few thousand dollars to get an egg analysed when you know the quality of that egg is going to make the results useless."