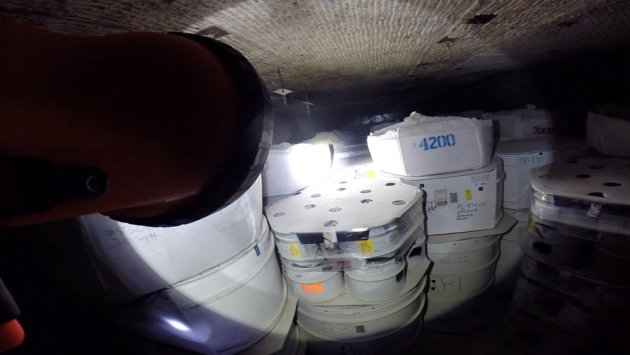 Stored packages at the Waste Isolation Pilot Plant were inspected for signs of damage after an accident in February.

A serious accident in February at the United States’ only deep-storage repository for nuclear waste might never have happened had the government not disbanded a key independent scientific body charged with oversight of the safety of the facility.

The Waste Isolation Pilot Plant (WIPP), carved out of a salt bed 655 metres below the desert near Carlsbad in New Mexico, is run by the Department of Energy (DOE) and stores low- and medium-level military nuclear waste, containing long-lived, man-made elements such as plutonium and americium. But there are politically controversial plans to store far hotter high-level waste at the site. Nuclear-waste experts say that the accident — in which a container is thought to have ruptured or exploded — along with management errors and a lack of oversight at WIPP, highlight the need for an independent risk assessment of any proposed expansion.

The facility was opened in 1999 and is designed to operate for a few decades, after which it will be sealed forever. The accident on 14 February released moderate levels of radioactivity into the repository, as well as small amounts into the environment, and officials say that the plant will not reopen for at least 18 months.

According to a preliminary report released on 24 April by a DOE-appointed Accident Investigation Board, the root cause of the accident lies with the department’s field office and Nuclear Waste Partnership, the contractor that operates the site, both in Carlsbad. They failed to identify radiological risks and make plans to control them, the report’s authors said. They added that maintenance of safety systems was neglected, and that DOE oversight was “ineffective”.

The report’s findings are in sharp contrast to WIPP’s past record as a model of how to safely design and operate a deep geological waste repository. Many scientists attribute that reputation to the tough oversight provided until 2004 by the Environmental Evaluation Group (EEG), a scientific body that was set up in 1978 and charged with protecting public health and the environment.

The EEG was staunchly independent of the DOE, and its technical expertise and authority were widely viewed as key to the public and political trust that the repository won. The Blue Ribbon Commission on America’s Nuclear Future, a government scientific advisory group, said in its 2012 report that the EEG “provided an independent and credible source” of information and review of WIPP.

But in 2004, with WIPP by then fully operational, the group was defunded and disbanded. Responsibility for oversight moved primarily to the New Mexico Environment Department in Santa Fe and the US Environmental Protection Agency. “With the demise of EEG, independent technical and scientific oversight and transparency of WIPP has diminished,” says George Anastas, a radiation and nuclear-safety consultant, and a former EEG staff scientist.

The accident report put into focus some of the decisions taken since the changeover. 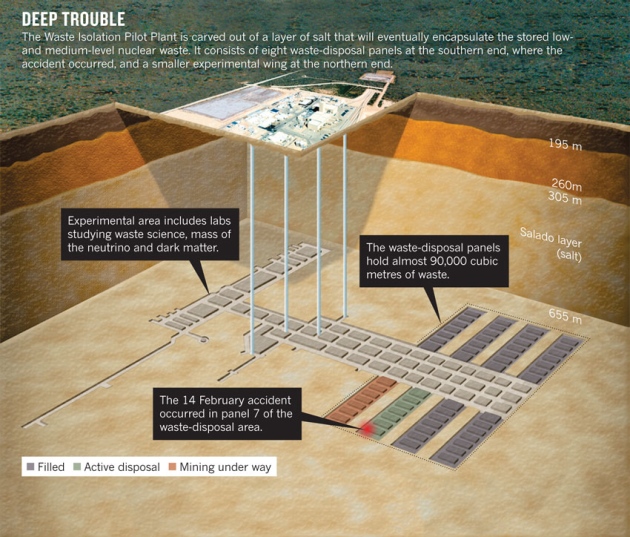 In 2006, for example, WIPP watered down a requirement that all waste containers have their contents analysed to characterize the type of waste they hold and to verify that they do not contain flammable, corrosive or reactive materials. This might have had a direct bearing on the accident. Although the ultimate cause has yet to be determined, an inspection on 30 April ruled out a roof or wall collapse, and experts say that photographs showing evidence of heat damage in panel 7, where the accident occurred (see ‘Deep trouble’), are consistent with an explosion of one or more containers.

And in 2009, WIPP eliminated 15 of the 22 potential accidents it had previously been required to withstand, “without any clear justification”, the report said.

Under the EEG’s watch, the reduction in postulated accidents would not have happened, says Lokesh Chaturvedi, an engineering geologist who was deputy director of the EEG from 1982 to 2000. “I have no doubt in my mind that had EEG continued, the standard for inspecting the drums before shipping to WIPP would not have been diluted,” he adds. James Channell, an environmental engineer and health physicist who worked at the EEG for 21 years, says that the accident and the report highlight the need to immediately reinstate an oversight body akin to the EEG. That body’s first job should be to carry out an independent review of the accident, he says.

Channell adds that proposals to expand WIPP’s remit from storing just defence-related low- and medium-level waste to include high-level waste also should not be approved without rigorous scientific evaluation.

One such proposal has been floated by the US National Nuclear Security Administration for the disposal of 34 tonnes of high-level, weapons-grade plutonium. A report released on 29 April by the agency concluded that storage at WIPP was the cheapest of several options, costing $8.8 billion. Other plans aim to store high-level spent fuel from nuclear power plants, which is much hotter than the high-level military waste. The proposals stem from another repository problem: the government had originally planned to store high-level waste in a facility at Yucca Mountain in Nevada, but the project was mothballed in 2010.

“Independent technical and scientific oversight and transparency of WIPP has diminished.”

Research and scientific consensus on the safety of storing very hot high-level waste in salt beds are lacking. In particular, the effects of high temperatures on the salt are not well characterized. Heat might draw water out of salt crystals towards the waste, for example, potentially creating danger from steam and pressure, says Don Hancock, director of nuclear-waste safety at the Southwest Research and Information Center, a watchdog group in Albuquerque, New Mexico.

The DOE and other scientists argue, however, that such salt, heat and water interactions may be inconsequential, and that the heat might actually have the positive effect of driving moisture out of repositories. Heat also speeds up salt creep, which could help to encapsulate waste faster, but might also create operational problems. Only field experiments, some of which have started at WIPP, will be able to definitively demonstrate that salt is a safe medium for storing high-level waste that generates large amounts of heat, they say.

Ed Lyman, a nuclear expert with the Union of Concerned Scientists in Washington DC, says that he strongly supports exploring the storage of down-blended weapons-grade plutonium at WIPP. Such waste generates much less heat than does spent fuel, he adds. But he rejects storing spent fuel at WIPP, as its likely impacts on the surrounding salt “would be inviting trouble”.

The DOE Field Office in Carlsbad and the Nuclear Waste Partnership had not responded to Nature when this article went to press.

Several scientists say that whatever the test results or arguments, the storage of high-level waste at WIPP should be ruled out because of the nature of the site. The area is rich in oil, gas and minerals, and oil and gas wells hug the 41-square-kilometre area. Hydraulic fracturing — fracking — of gas is also carried out nearby. This poses the risk that the WIPP repository could be disturbed by future drilling and mining, for example, by the puncture of the high-pressure brine reservoirs beneath WIPP.

There is no way that the authorities would ever approve such a site for storing high-level waste, says Chaturvedi.