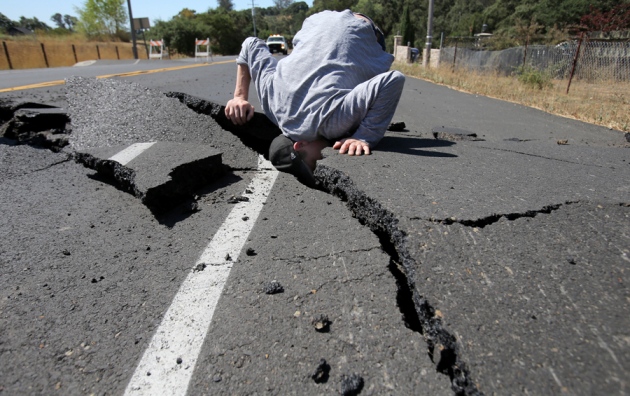 A man takes stock of the damage caused by the earthquake in Napa on 24 August.

The Bay Area Rapid Transit (BART) trains of San Francisco were not running at 3.20 a.m. on 24 August when a magnitude-6 earthquake hit the region. But the BART computers were working — and they knew what was about to happen 10 seconds before the ground started shaking, thanks to an alert from California’s prototype warning system. Had the quake struck in the middle of the day, the computers would have instructed the trains to slow to a stop — potentially avoiding a derailment and saving the lives of passengers.

With such a scenario in mind, researchers are pushing hard to wire a much broader swathe of the US west coast, from California to Washington, with a fully fledged earthquake warning system. The US$120-million project has not yet secured funding, but the latest quake, centred near Napa, California, which caused several hundred million dollars’ worth of damage, could tip political fortunes in its favour. Seismologists and emergency-services managers will discuss the practicalities of implementing such systems at a conference starting on 3 September at the University of California, Berkeley.

“I’m hoping the Napa quake has created a sense of urgency,” says Alex Padilla, a California state senator who represents a district near Los Angeles. Padilla introduced a bill that Governor Jerry Brown signed into law last September, which gives the state until 2016 to set up an early-warning system before the legislation expires.

Yet the law does not specify where the $80 million for California’s part of the system would come from. That puts US seismologists at a crucial turning point: if they are unable to push through an early-warning system in time, they might struggle to get one at all.

Several countries, including Mexico and Japan, have extensive warning systems in place to protect their key infrastructures. And in Istanbul, seismic sensors allow one of Turkey’s main natural-gas providers to shut down its pipelines if the ground is about to start shaking. Similar warnings flow to nuclear power plants in Romania.

California has the backbone of a warning system — ShakeAlert, a project run by a consortium of universities and the US Geological Survey (USGS). The system uses real-time information from seismic waves arriving at California’s sensor network to send warnings that secondary, more damaging waves are on their way. The alerts go to scientists as well as to about 150 organizations, emergency managers and other testers. 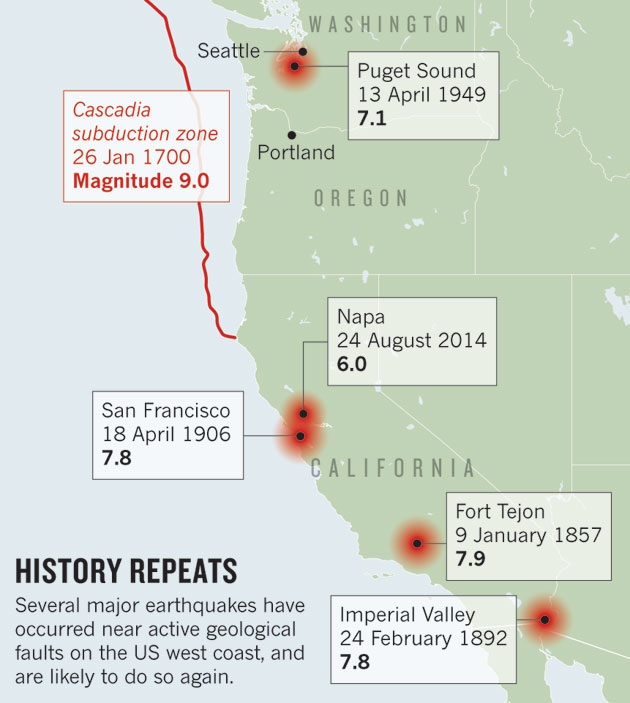 And the system works. During the recent Napa quake (see ‘History repeats’), ShakeAlert provided about 10 seconds of warning to San Francisco, which is about 50 kilometres from the epicentre. “If this isn’t a sufficient demonstration of the system to fund full-blown implementation, how big does a quake have to be?” asks Richard Allen, a seismologist at the University of California, Berkeley.

ShakeAlert was developed with $6.5 million from the philanthropic Gordon and Betty Moore Foundation in Palo Alto, California, but that money will run out next year. So far, no one has stepped up with the funds to turn it into a mature operational system. In an ideal world, the USGS would have set up a federally run warning system years ago, says Thomas Heaton, a seismologist at the California Institute of Technology in Pasadena.

But USGS budgets have been shrinking for years, and states will probably end up footing at least part of the bill. To Heaton’s mind, it is not an ideal solution because states do not necessarily have the resources or expertise: having a state in charge is “like Florida running a hurricane warning system”, he says.

Padilla and other politicians have been trying to secure the money through different infrastructure projects to upgrade California’s current seismic network and add hundreds of new stations. An earthquake early-warning system will never be perfect: it will always have a blind zone, an area too close to the quake to receive a warning. But that zone can be shrunk by adding stations and improving the network, Allen says.

For example, the decade-old sensor at the seismic station closest to the Napa quake’s epicentre took 2.8 seconds to register the shaking, process it and relay it to the network that monitors Californian earthquakes. Had the sensor been newer, it could have done all that in just 0.3 seconds — fast enough to alert the town of Napa itself that a quake was imminent, allowing residents to dive for cover, Allen says.

To be most effective, the warning network would also need to link to infrastructure, as it does to the BART computers. “We’re really talking about a modern command-and-control system,” Heaton says. “To turn our seismic networks into something that’s automatically controlling trains and elevators and the like, we need a team of software designers working for several years,” he explains.

Such connectivity becomes even more important were California to integrate its system with seismic networks farther north in Oregon and Washington. There, the offshore Cascadia fault zone has potential to let loose a quake as big as magnitude 9. The fault is relatively far from cities, so an early-warning system might provide minutes of warning to Portland, Seattle or Vancouver.

Expanding into Oregon and Washington would require $40 million over five years. Seismologists in the region aim to trial alerts using testers — much as ShakeAlert is doing — by next spring, says John Vidale, a seismologist at the University of Washington in Seattle.

“We don’t want to wait until we have a major damaging earthquake with hundreds of fatalities,” says Allen. “We want to build it now.”