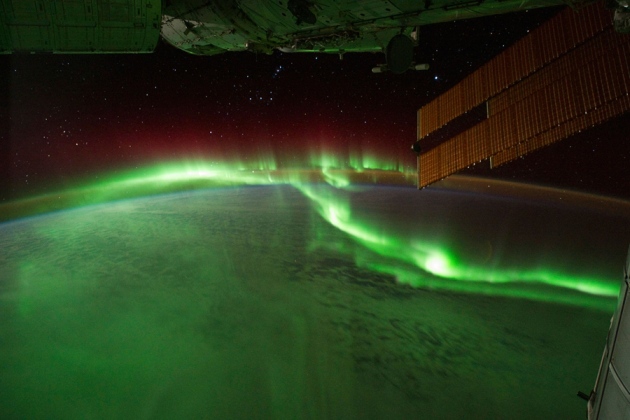 Four out of ten mission proposals being considered by the European Space Agency would study plasma in Earth's magnetosphere, shown off to spectacular effect in our planet's auroras (seen here from the International Space Station).

An ambitious proposal to grab a chunk of asteroid and return it to Earth has been ditched by the European Space Agency (ESA) as it chooses its next €450-million (US$487-million) space mission, scheduled to launch in 2025. The agency also dropped plans to travel to other planets, in total cutting 17 out of 27 possible projects after its first round of review, according to an unofficial list seen by Nature.

Of the ten projects still in the competition, four missions concern space plasma physics, such as measuring the properties of Earth’s aurora, and three different telescopes would look for X-ray emissions in space (see 'Mission shortlist'). Whichever project wins will be the fourth in a series of what ESA terms “medium-sized” missions in its Cosmic Visions programme for future space launches. Last year it picked its third mission, PLATO, a space telescope to find exoplanets, to launch in 2024. Two previous competitions had selected Solar Orbiter, a telescope to skirt the Sun (to launch in 2017), and EUCLID, a telescope to investigate dark energy (slated for a 2020 launch). ESA has also picked two 'large' €1-billion missions under the same programme: JUICE, to visit Jupiter's moons (2022), and Athena+, an X-ray space telescope (2028).

For its fourth medium-sized mission, ESA decided to set a strict budget of €450 million, less than the typical €550 million to €600 million of previous programmes. The constraint has meant that many hopeful candidates who applied in this round have already lost out, after a review to check that a proposed mission could be built within budget.

Ian Franchi, a planetary scientist at the Open University, UK, says that he is “very disappointed and frustrated” that the project he was leading — a plan for a probe to float gently into an asteroid, collect a sample, and bounce off — has been culled. Called MarcoPolo-2D, the idea had already been studied in detail, because a version of the proposal was one of the final five missions shortlisted in last year’s contest. Another previously shortlisted project, to test Einstein’s theory of relativity by making precision measurements in space, has also been cut.

But two of last year’s shortlisted missions are still in the running: LOFT, a proposal to examine matter in extreme environments (such as in neutron stars or orbiting close to black holes) by measuring its X-ray emissions, and ARIEL, to search for planets outside our solar system.

In cutting its list so significantly, ESA is sending a strong message, says Colin Wilson, a planetary scientist at the University of Oxford, UK, who was on a team that proposed visiting Venus: “They don’t want cost overruns.” Nonetheless, Wilson says that his team could have made their project work even at ESA's reduced cost. He notes that no interplanetary missions have passed the review.

Luigi Colangeli, head of the ESA Coordination Office for the Scientific Programme in Noordwijk, the Netherlands, declined to comment on the shortlist while the selection process is ongoing.

A scientific-review stage will now pare down the survivors to an even shorter list by June, with a final decision expected in a year or two, says Colangeli. Those who lost out this time will have to throw their hat into the ring for ESA’s fifth mission, a competition expected to open late this year or in early 2016, for a launch around 2028–30.