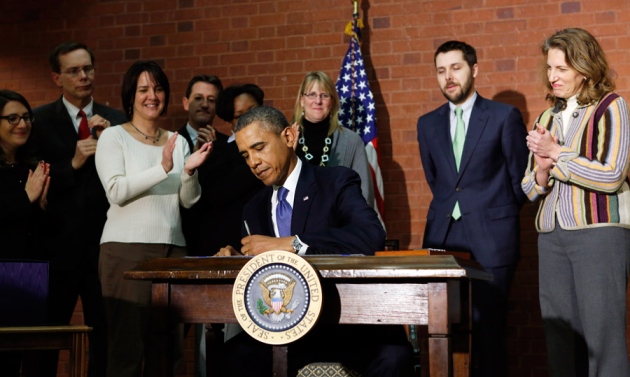 For US science agencies, the worst may be over. After a year of pitched budget battles, which began with an across-the-board cut and ended with a government shutdown, Congress displayed a rare moment of harmony last week as its members swiftly approved a US$1.1-trillion spending bill for 2014.

The bill, which President Barack Obama signed into law on 17 January, funds government operations until 30 September. It reverses much of the damage wrought in 2013 by the automatic 5.1% cut known as sequestration. And it even puts some agencies above 2012 levels — the year against which agencies are now measuring themselves after the annus horribilis of 2013 (see ‘Budget highlights’). “These numbers are about as good as anybody could have expected,” says Matt Hourihan, director of the research and development budget and policy programme at the American Association for the Advancement of Science in Washington DC. In general, he says, science agencies received bigger boosts than other sectors of the government — a sign, perhaps, that bipartisan support for science endures despite an overwhelming push for fiscal austerity.

But that relief was not administered equally within science. Agencies that fund physical-sciences research, including the National Science Foundation (NSF) and the Department of Energy’s Office of Science, received small increases compared with 2012 funding levels. Biomedical research, by contrast, was dealt a blow, with the National Institutes of Health (NIH) seeing its budget decline by roughly $800 million from 2012 levels to $29.9 billion. That continues a decline that began in 2004, after adjusting for inflation.

The Food and Drug Administration did not fare much better than the NIH, although its $2.6-billion budget does surpass its 2012 funding level by $45 million.

Passing a budget in the middle of flu season, however, seems to have rustled up money for public health. The $5.8 billion approved for the Centers for Disease Control and Prevention (CDC) adds $151 million to its 2012 budget. It includes $255 million for purchasing vaccines through Project BioShield — $5 million more than the president requested — and $30 million for the Advanced Molecular Detection initiative, which will upgrade the CDC’s bioinformatics technology and enable faster detection of outbreaks.

*2013 figures include the roughly 5% across-the-board cut arising from the sequester. †Includes one-time transfer of $85 million in user fees.

Source: US Congress; White House Office of Management and Budget.

Perhaps the biggest single boost within biodefence is the $404 million for the long-awaited, controversial National Bio and Agro-Defense Facility (NBAF) in Manhattan, Kansas, which will study infectious diseases in large livestock. The Department of Homeland Security project was delayed by Congress after a 2010 National Academy of Sciences report found faults in the facility’s design that could allow pathogens to escape.

Although the NBAF funding falls $310 million short of Obama’s request, Ron Trewyn, vice-president for research at Kansas State University in Manhattan, says that construction of the facility could start as early as this year. The lab, which is expected to take five years to complete, will be the only US livestock-disease facility to have the highest level of biosecurity (known as BSL-4).

The NSF received $7.2 billion, an increase of $70 million over 2012 levels. Its budget includes $200 million for ongoing construction projects, and sets aside $17.5 million for the Large Synoptic Survey Telescope (LSST), a $653-million astronomy project in Chile. Although the sum for the project is $10 million short of the president’s request, Congress has essentially blessed the LSST, and construction can now begin in July. The fact that the tele­scope was explicitly mentioned in the bill left some of its proponents pleasantly surprised. “Getting a new start in an NSF budget is a very major accomplishment,” says William Smith, president of the Association of Universities for Research in Astronomy in Washington DC, which will manage the LSST project for the NSF.

Meanwhile, NSF-funded political scientists are equally excited not to get a mention. In the 2013 spending bill, Senator Tom Coburn (Republican, Oklahoma) inserted a provision requiring that political-science research funded by the NSF benefit national security or US economic interests. The NSF then skipped a round of grants in August. The absence of restrictions in the latest bill “returns the judgement of scientific merit to those who are in the best position to gauge the quality of the work”, says Rick Wilson, a political scientist at Rice University in Houston, Texas, and a former programme director for political science at the NSF.

At the Department of Energy, the bill provides $27.3 billion — $1.7 billion below the president’s request but still nearly $1 billion above the 2012 level. That includes nearly $5.1 billion for the Office of Science, an increase of 3% from 2012. Within the office, researchers in fusion energy received one of the biggest surprises. The budget boosts funding for their field by 28% compared with 2012 levels, providing nearly $306 million for the domestic fusion research programme. It includes $22 million to revive Alcator C-Mod, a magnetic plasma-confinement machine at the Massachusetts Institute of Technology in Cambridge that the administration sought to cancel in 2012. The bill also provides the full $200 million US contribution to ITER, an international fusion experiment under construction in southern France.

“These numbers are about as good as anybody could have expected.”

The budget represents a setback for the president’s clean-energy research agenda, however. Although overall spending on renewable energy and energy efficiency is nearly 7% higher than in 2012, the budget eliminates much of the extra funding requested by the president for clean-energy research and development, in areas ranging from advanced manufacturing to wind and solar energy. The plan also cuts $99 million from the president’s request for the Advanced Research Projects Agency-Energy, and so its budget will remain relatively flat at $280 million. Fossil-fuel research and development, meanwhile, will receive $562 million, which is $142 million above the president’s request and $225 million above 2012 levels — an increase of 67%.

NASA fared reasonably well, receiving $17.6 billion overall, including almost $5.2 billion for science. However, lawmakers took a public swipe at the proposed mission to bring an asteroid to lunar orbit and send astronauts there to study it (see Nature 499, 261–262; 2013). “NASA has not provided Congress with satisfactory justification materials such as detailed cost estimates or impacts to ongoing missions,” they wrote. Although the agency is hunting for more asteroids of the right size and orbit to be a mission target, the list of candidate rocks is just six — down from 14 last summer, because some have been ruled out as being too small.

The budget also carries language that bans NASA from engaging bilaterally with China. Originally introduced by Congressman Frank Wolf (Republican, Virginia) in 2011, the China restrictions are politically popular among Republicans in the House of Representatives and are likely to be kept in place by Wolf’s successor after he retires this year, if Republicans keep control of the House after the 2014 elections, says Marcia Smith, a space-programme analyst and founder of SpacePolicyOnline.com. The ban has led to much confusion about how widely it applies. For example, Chinese scientists were initially barred from a November 2013 exoplanet conference at a NASA facility in California before later being allowed in.

From the $1.3 billion specified for planetary exploration, Congress required that $80 million would go to prepare a mission to Jupiter’s moon Europa, even though a similar mission was dropped from a joint plan to explore the Jupiter system with the European Space Agency. The fact that some members of Congress specifically fund a Europa mission each year has rankled with planetary scientists who want to study other parts of the Solar System. Lawmakers did, however, encourage NASA to put out a call for ideas by May for its next Discovery class of small-scale planetary missions.

Speculation now turns to the 2015 budget cycle, which begins on 1 October. For the past few years, Congress has bridged its political differences on government spending by approving a series of stopgap measures that maintained prior funding levels, avoiding major changes to agency budgets. Now, buoyed by the new deal, House and Senate leaders say that they hope to enact a detailed funding plan before the October deadline. Lawmakers have already overcome one major obstacle by setting an overall 2015 level for ‘discretionary’ spending, a category that includes civilian-science agencies. To Hourihan, it is reason for cautious optimism. “Things may get a little bit easier,” he says. “But the big picture hasn’t really changed.”