Late last month, officials at California’s Scripps Institution of Oceanography turned to Twitter seeking donations to maintain the iconic ‘Keeling curve’, a 55-year record of rising atmospheric carbon dioxide levels. An appeal for funds launched in July had attracted only a few small con­tributions, not nearly enough to keep the programme going.

Scripps geochemist Ralph Keeling, who took over the CO2 measurements started by his father Charles, is neither surprised nor disappointed. “That’s more a fishing expedition than anything,” he says of the nascent crowdsourcing at Scripps in La Jolla. But he is worried.

For years, he has struggled to cobble together enough cash to support the CO2 programme and an atmospheric-oxygen record that he pioneered in 1989. Bouncing between grant programmes designed to fund short-term projects, not long-term monitoring, he has cut staff and streamlined operations to keep the records going.

But now, with his funds running dry, he wonders about the future. “Things have never been this dire before,” he says.

Much has changed since 1958, when Charles Keeling took his first CO2 measurements atop Mauna Loa in Hawaii. The programme he started now monitors CO2 at 13 sites, from the South Pole to Alaska (see ‘Greenhouse grid’). The National Oceanic and Atmospheric Administration (NOAA) runs a larger network that overlaps with the Scripps system, helping both teams to ensure that their measurements are correct. These data, along with other measurements from researchers around the world, flow into models designed to study how carbon moves through the environment. 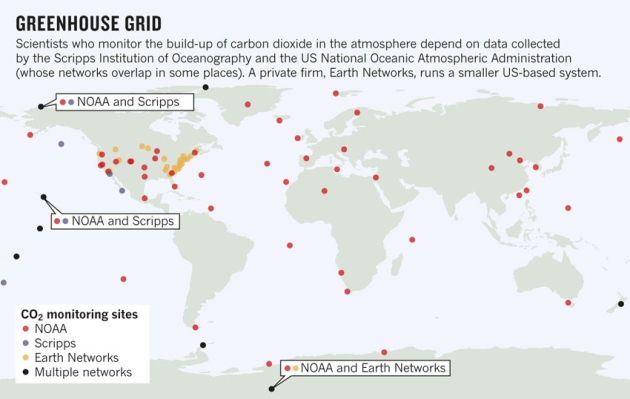 The complement to the Keeling curve is Ralph Keeling’s atmospheric-oxygen record, which NOAA does not replicate. Keeling has documented a decrease in oxygen levels that is due to fossil-fuel combustion, which uses up oxygen and releases CO2. By accounting for both CO2 and oxygen levels in the atmosphere, scientists have calculated that oceans and plants each absorb roughly one-quarter of humanity’s CO2 emissions, leaving half to build up in the atmosphere.

“We expected an answer close to that, more or less, but Ralph Keeling was the first to provide the measurements,” says Pieter Tans, who heads NOAA’s carbon-cycle and greenhouse-gas group in Boulder, Colorado.

Keeling says that he received around US$700,000 annually for the CO2 programme through paired support from the National Science Foundation (NSF) and the Department of Energy (DOE) until three years ago, when the NSF halted funding. With staff cuts, he has been able to maintain operations with a budget of around $350,000. He has also partnered with Earth Networks, an atmospheric-monitoring company based in Germantown, Maryland, which has deployed a sensor for him at Mauna Loa to reduce the costs for Scripps. His latest grant application to the DOE is pending, but in the meantime he is operating on spare funds.

The situation is murkier for the oxygen measurements, which the NSF and NOAA supported for more than two decades. The NSF pulled the plug in 2009, and Keeling’s NOAA grant could run out in early January. In an effort to keep things going, Keeling says that he went back to the NSF and was assured that he would get about $350,000 from the Division of Polar Programs this autumn. (NSF officials say that they cannot comment on pending grants.) That money would carry him into next year, but it remains unclear what will happen after that. Jim Butler, director of NOAA’s Global Monitoring Division in Boulder, says that NOAA cannot simply fold Keeling’s CO2 stations into its own observations budget, given that the value of having two CO2 networks is scientific independence. The oxygen measurements, by contrast, would fit nicely into NOAA’s portfolio, Butler adds, but his division’s budget has shrunk by 12% since 2011, with further cuts expected this fiscal year. Budget constraints have already forced the agency to reduce staff and shut down monitoring at ten sites.

“NOAA’s budget is getting hammered, and it’s increasingly difficult to fund things like Ralph’s programme,” Butler says. “All I can do right now is provide moral support to keep it going year by year until we come up with a plan.”

For a while, it seemed that commercial interests might pick up some of the slack. Working with Scripps, Earth Networks announced plans in 2011 to deploy a global network of 100 greenhouse-gas monitoring stations. But two years later, with climate regulations on the back burner in Washington DC, the company is operating just 25 stations. “We really don’t have any mater­ial customers at this point,” says Earth Networks’ president Bob Marshall.

Keeling has considered approaching private foundations for help, but acknowledges that atmospheric monitoring is an unusual target for philanthropy. Moreover, he says, a private donor would probably want to see evidence of stable government support before committing.“The difficulty of keeping these things going long term, even within the government, needs to be recognized,” he says.