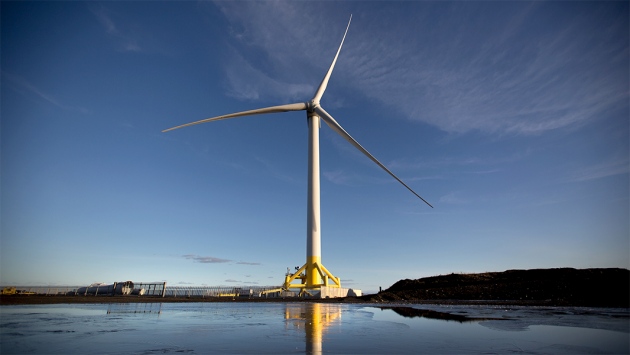 UK scientists fearful for their research funds ahead of Brexit were cheered last November when the government announced it would plough an extra £4.7 billion (US$6.1 billion) into research and development (R&D) by 2020–21. But the biggest winner from the largely industry-focused cash may be a government innovation agency that is rapidly gaining clout.

Innovate UK began operating ten years ago this month as an independent body called the Technology Strategy Board — a prosaic title that reflected its origins as a small government advisory panel of industrialists and civil servants. Since then, the organization has rebranded and has seen its budget quadruple to around £800 million a year (see ‘Innovation boom’), mainly doled out as grants to consortia of research organizations and businesses, which must match the money with private funds.

That budget is soon expected to grow further, says Ruth McKernan, the agency’s chief executive. The government’s R&D windfall includes an Industrial Strategy Challenge Fund (ISCF) to help researchers working on key technologies that might benefit the UK economy. That fund has already been promised £1 billion, including £246 million to help develop batteries; on 24 July, the government announced that this would include a £45-million competition to establish a new centre for battery research. 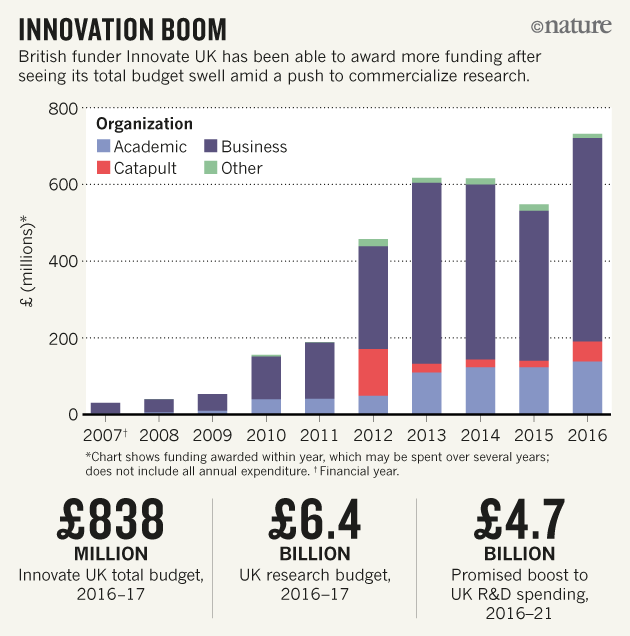 It was a team at Innovate UK that first suggested the challenge concept after studying the workings of the US Defense Advanced Research Projects Agency (DARPA), McKernan says. And her agency has been allotted joint responsibility for running the ISCF alongside the research councils, the main funders of UK university science. Ties between the two groups are growing because of a shift in the United Kingdom’s funding landscape: from April 2018, both Innovate UK and the research councils will become part of a central organization called UK Research and Innovation (UKRI). The ISCF’s set-up marks a departure from normal operations for Innovate UK and the research councils, says McKernan. “This is setting a challenge that together we can try to solve.”

The government is relying on the R&D boost, and on the ISCF in particular, to reassure researchers who are wary of Brexit’s detrimental impacts on science, says Kieron Flanagan, a science-policy researcher at the Alliance Manchester Business School. “I think the fund is going to be too big for academics to ignore.”

Innovate UK is more focused on businesses than on universities. The largest beneficiary of its funding is car-maker Rolls-Royce, which has received almost £300 million since 2007; the agency’s most-quoted success story is its early funding of SwiftKey, a firm making predictive text apps that was bought by Microsoft for a reported $250 million in 2016. The organization says that it is increasingly focusing on funding small- and medium-sized enterprises. Only 20% of its cash ends up at universities, although some are adept at winning funds: the University of Sheffield, which has strengths in engineering and manufacturing research, has received £150 million, for instance.

“The fund is going to be too big for academics to ignore.”

Outside Britain, the name Innovate UK is familiar to scientists and business people, but few know what it does, says Dan Breznitz, a researcher in innovation policy at the University of Toronto, Canada. One of the agency’s major outputs is more widely appreciated, Breznitz says — its Catapult centres. This network of physical centres, which are loosely based on the Fraunhofer Institute’s centres in Germany, provides equipment and resources to bridge the gap between university research and commercial technologies.

The largest, with £150 million in Innovate UK funding, is the Cell and Gene Therapy Catapult in London. It has “galvanized” UK researchers in the field, says Stuart Forbes, who works on regenerative medicine at the University of Edinburgh. He relied on its advice to help get a potential cell therapy for liver cirrhosis into phase II trials. A first formal evaluation of the success of the Catapult centres — most of which are now five years old — will be published in September. A major focus in the future, says McKernan, will be helping businesses from one sector benefit from research expertise in another; for example, by bringing the benefit from large data sets, satellite technology, machine learning and artificial intelligence into sectors such as health and agriculture.

As Innovate UK’s influence grows, it is in danger of losing focus on its core mission, says Breznitz. The agency has so far struggled to find its identity, restructuring several times in its short existence, he says. If it now tries to act both like DARPA, with calls to solve key challenges, and like the US Small Business Innovation Research programme, which hands out grants to small research firms, it will struggle, he says.

The agency may also sharpen UK science’s focus on economic returns. It uses economy-based metrics, such as jobs generated and return on investment, to analyse its success, McKernan says.

She thinks that under UKRI, research councils might learn from this approach. “I would anticipate a much stronger analytics group across UKRI that understands how to get the return on investment from early, translational and applied research — and how we change some levers to get a stronger output,” she says.