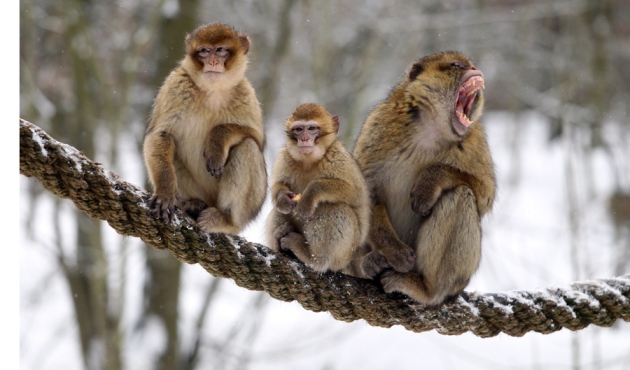 Snuggling together in the cold may help Barbary macaques get through harsh winters.

When it comes to friendship it may be quantity, not quality, that matters — at least for Barbary macaques in a crisis. Scientists have long known that sociable humans live longer than their solitary peers, but is the same true for animals?

A harsh natural experiment may offer some answers. It also raises intriguing questions about the type of social ties that matter.

Endangered Barbary macaques (Macaca sylvanus) in the mountains of Morocco are accustomed to cold, but the 2008–09 winter was devastatingly hard for them. Snow covered the ground for almost four months instead of the usual one, and the monkeys, which eat seeds and grasses on the ground, began to starve.

Richard McFarland, a behavioural ecologist at the University of the Witwatersrand in Johannesburg, South Africa, and his colleagues were studying the animals as part of a wider project on the monkeys' social lives launched in January 2008. When they went looking for the macaques in January 2009, they found corpses, says McFarland.

Of the 47 adults in two troops that the team studied, only 17 survived, making for a 64% mortality rate, McFarland and his colleague Bonaventura Majolo of the University of Lincoln, UK, report today in Biology Letters1. Analysis showed that the more friends a monkey had, the more likely it was to have survived. Individuals with whom a monkey had exchanged grooming or had had bodily contact with at least once during observation sessions were deemed as social contacts.

Perhaps the animals with more buddies had more partners with whom to huddle against the cold, the researchers suggest. Monkeys with large social networks may also have been able to look for food with fewer interruptions from hostile group members.

However, what did not predict survival was the quality of the macaques’ friendships, as measured by factors such as how much time two macaques spent close together. Previous studies in baboons have shown that longevity2 and reproductive success3 are linked to quality of social contacts, rather than quantity. But McFarland argues that it makes sense that sheer quantity matters for surviving a catastrophe.

In a disaster, an individual who loses his few close friends is “left with nothing”, he says. “Compare that to someone who has ten relationships. If one of their friends perishes during the winter, they still have nine more friends to go to.”

Other researchers praise the work, but have mixed opinions on the nature of the social ties that count.

The study “is a really nice piece of natural history” that adds to the evidence that sociality is important, says Joan Silk, a primate behavioural ecologist at the University of California, Los Angeles, who has worked on sociality in baboons. But she is “less convinced” by the study’s finding on relationship quantity.

Guy Cowlishaw, a behavioural ecologist at the Institute of Zoology in London, agrees with the finding that monkeys with lots of superficial ties might do better in this situation than those with a few deep friendships.

He adds that McFarland's paper is valuable for shedding light on how extreme events brought on by climate change will affect primates, nearly half of which, he points out, are already at risk of extinction.