Bronze Age skeletons, including this one from Bulanovo (modern-day Russia) that dates back to 2000BC, contain DNA from the bacterium that causes plague.

The Black Death notoriously swept through Europe in 1347, killing an estimated 50 million people. Yet DNA from Bronze Age human skeletons now shows that the plague had first emerged at least as early as 3,000 bc. The earlier outbreak probably did not spread as ferociously, the analysis reveals — but it may nonetheless have driven mass migrations across Europe and Asia1.

The bacterium Yersinia pestis is suspected to have caused the Black Death and other ancient plagues. Historical descriptions of the disease’s quick spread and symptoms such as pus-filled growths match modern outbreaks of bubonic plague caused by the bacterium, and the remains of ancient plague victims have been found to contain Y. pestis DNA2, 3.

The earliest of these infections comes from a burial in Germany linked to the six-century Plague of Justinian3. Yet some historians suspect that Y. pestis was also responsible for earlier outbreaks such as the Plague of Athens, which struck the city-state in the fifth century bc, at the height of the Peloponnesian War.

The Bronze Age — between about 3000 and 1000 bc — was a tumultuous period that saw new cultural practices and weapon and transport technologies spread rapidly across Eurasia. Earlier this year, a pair of ancient-genome studies documented a massive exodus of people from the steppe of what is now Russia and Ukraine; they scattered west into Europe and east into central Asia4, 5.

“But we didn’t know what the cause of these quite sudden migrations was,” says Morten Allentoft, an evolutionary geneticist at the Natural History Museum of Denmark in Copenhagen, who was part of a team that sequenced DNA from 101 Bronze Age skeletons4.

Suspecting that an infection similar to plague might have been involved, the same team analysed 89 billion fragments  of raw DNA data from the Bronze Age skeletons in search of Y. pestis sequences. Teeth from 7 of the 101 individuals tested positive, and 2 contained enough plague DNA to generate complete genome sequences. The oldest of the Bronze Age plague strains came from an individual who lived nearly 5,000 years ago in southeast Russia, pushing back the origins of plague by some 3,000 years. The findings are published today in Cell1. 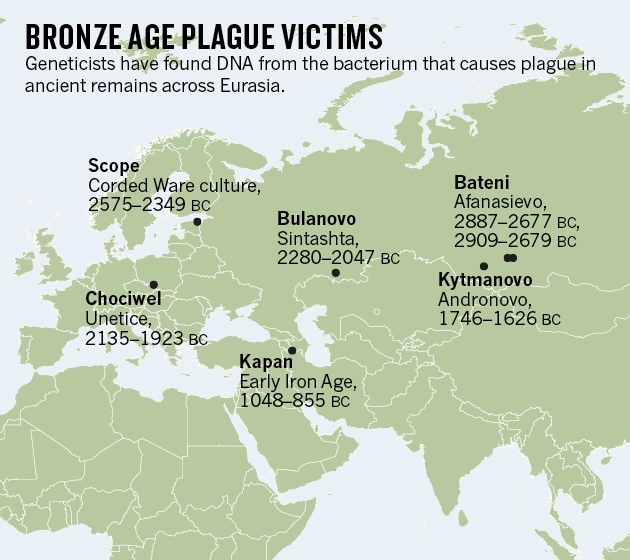 The Bronze Age plague strains were very similar to the bacteria responsible for the Black Death and modern outbreaks. They shared nearly all of the ‘virulence genes’ that distinguish Y. pestis from a related, although much less deadly, bacterium that infects the intestines.

But the analysis revealed that plague might have been less transmissible in the early Bronze Age. The six oldest Bronze Age strains lacked a gene called ymt that helps Y. pestis to colonize the guts of fleas, which serve as an important intermediary. In outbreaks of bubonic plague, infected fleas (often travelling on rodents) transmit the bacteria to humans living nearby. Without fleas as a go-between, Y. pestis spreads much less efficiently through blood (where it is known as septicaemic plague) or saliva droplets (pneumonic plague). An early Iron Age skeleton from Armenia dated to around 1000 bc was infected with Y. pestis that harboured ymt as well as another mutation linked to flea-aided transmission.

Wyndham Lathem, a microbiologist at Northwestern University’s Feinberg School of Medicine in Chicago, Illinois, says that in the absence of ymt, Bronze Age plague victims would have probably contracted pneumonic plague, as opposed to the bubonic form. All the Bronze Age strains also contained another virulence gene, pla, which Lathem's team has shown is important in infecting the lung6.

Plague may have been less transmissible without fleas, but it would have been no less deadly. More than 90% of untreated cases of pneumonic plague are fatal.

Such outbreaks could have aided the spread of Eastern European steppe herders known as the Yamnaya during the Bronze Age, says Johannes Krause, an evolutionary geneticist at the Max Planck Institute for the Science of Human History in Jena, Germany. The Yamnaya rapidly supplanted local farming populations in Western Europe between 3000 and 2500 bc. “How is it possible that the local farmers have been replaced by people from the steppe? A pandemic is a good possibility,” Krause says.