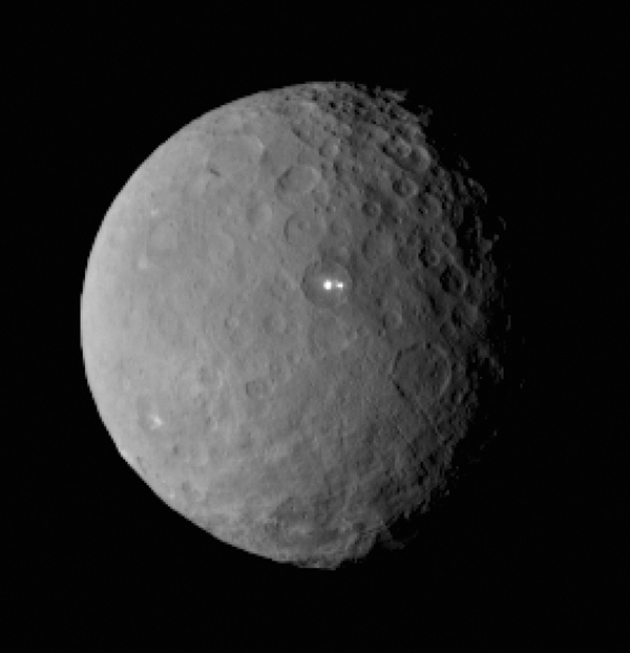 The Dawn spacecraft captured this image of Ceres' twin bright spots on 19 February.

A pair of bright spots glimmering inside an impact crater on the dwarf planet Ceres, mystifying scientists, could be coming from some kind of icy plume or other active geological feature.

New images from NASA’s Dawn spacecraft show the spots, known as ‘feature number 5’, at changing angles as the dwarf planet rotates in and out of sunlight. The pictures reveal the spots even when they appear near the edge of Ceres, when the sides of the impact crater would normally block the view of anything confined to the bottom. That something is visible at all in this circumstance suggests that the feature must rise relatively high above the surface.

“What is amazing is that you can see the feature while the rim is still in the line of sight,” said Andreas Nathues, a planetary scientist at the Max Planck Institute for Solar System Research in Göttingen, Germany. Nathues, who leads the team for one of the Dawn cameras, revealed the images on 17 March at the Lunar and Planetary Science Conference in The Woodlands, Texas.

Tip of the ice plume

At dawn on Ceres, feature number 5 appears bright. By dusk, it seems to fade. That could mean that sunlight plays an important part — for instance, by heating up ice just beneath the surface and causing it to blast off some kind of plume or other feature.

Ceres is believed to be at least one-quarter ice — more so than most asteroids. Dawn’s goal is to work out where that ice resides and what role it has in shaping the dwarf planet’s surface. One idea is that the ice is blanketed by a very thin layer of soil. The ice may occasionally squirt up in towering ‘cryovolcanoes’, thanks to internal pressures in the asteroid.

Dawn is currently looping back towards Ceres, having been captured by its gravity on 6 March. Once the spacecraft gets closer to the dwarf planet, it will begin taking more pictures to see what parts of the surface might be changing. “The big question is whether Ceres has an active region — or more than one,” Nathues told the meeting.

Christopher Russell, a planetary scientist at the University of California, Los Angeles, and Dawn’s principal investigator, said that towards the end of its mission the spacecraft will map Ceres at high enough resolution to see features that are just 30 metres across. As resolutions improve, the hope is that the possible icy plume will come into focus and reveal itself for whatever it may be.

“By the end of this mission, we hope to show that Ceres is every bit a planet, as much as its terrestrial neighbours Mars, Earth, Venus and Mercury are,” said Russell.