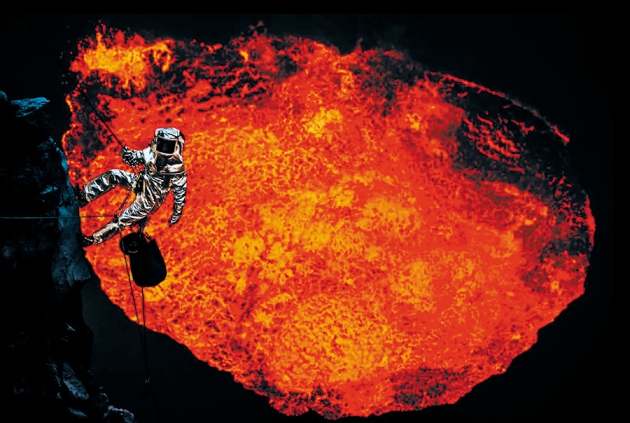 The classic 1970s British television series Upstairs, Downstairs is a good metaphor for our planet’s evolution. Like the show, Earth’s habitability depends on the dynamics of a complex household, and on subtle interactions between divided worlds.

Upstairs, at its surface, Earth is rich in molecular oxygen. O2 is the second-most abundant gas in the atmosphere, making up 21% of our air. It reacts readily, so most of Earth’s surface is oxidized. Downstairs, by contrast, in Earth’s interior, molecular O2 is vanishingly rare. Materials brought up from the mantle, such as volcanic rocks, react with O2 when they are exposed. Earth’s oxidized surface is a veneer enveloping a vast O2 sink.

This contrast was not always so stark. It changed halfway through the planet’s history. Around 2.3 billionyears ago, the amount of O2 in the atmosphere rose above one part per million, beginning an ascent to the high levels of today1. This Great Oxidation Event transformed Earth and made intelligent life possible. Its cause remains a mystery. Solving it is a key challenge for Earth-systems scientists. It is also a challenge for astrobiologists: their ability to use O2 as a signature of life on planets beyond our Solar System hinges on a better understanding of how it arose on Earth.

Key to that story is the balance between organisms’ production of O2 on the surface and consumption of the gas by reactions with rocks, fluids and gases from the interior. But we lack a quantitative theory of our planet’s evolution that links changes at the surface with those below.

In part, that is because the surface and solid Earth research communities struggle to communicate with each other. After examining interactions within our own large Dynamics of Earth System Oxygenation team, funded by the US National Science Foundation, we learned that researchers in these neighbouring fields barely speak the same language. Our challenges are as much sociological as they are scientific.

A fuller theory of Earth evolution will emerge by bridging three divides. First, geoscientists studying the surface history of O2 — typically geobiologists and low-temperature geochemists — need to understand how the gasis influenced by what goes on below. Second, geoscientists studying Earth’s interior — geophysicists and high-temperature geochemists — must realize that such questions are also germane to some of their most vexing challenges. Third, geoscientists of all stripes should improve their conversations by integrating methods from communications disciplines. 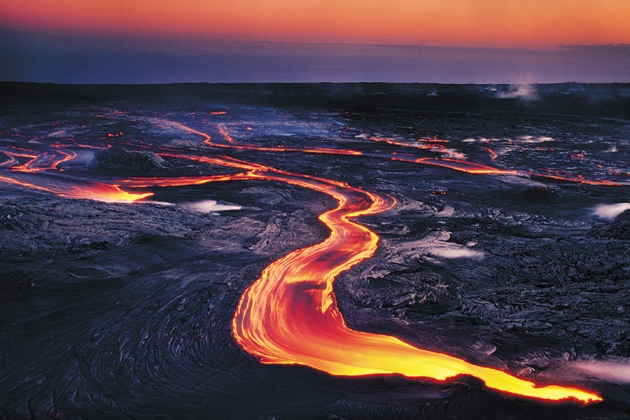 A lava flow from the Puu Oo volcanic cone in Hawaii.

Geoscientists trying to explain the rise of O2 in Earth’s atmosphere increasingly realize that something prevented this gas from accumulating for a billion years or more before the Great Oxidation Event. Geological evidence is mounting that photosynthesis was producing O2 as early as 3.5 billion years ago. Microbial ‘mats’ in shallow waters at ancient seashores — preserved today as fossilized stromatolites that date back to at least that time — could have been inhabited by O2-making cyanobacteria. Studies of the abundances of carbon, molybdenum and other elements and their isotopes in marine shales and carbonate rocks support this picture1.

Interactions between the surface and interior of the Earth are implicated2. Rocks derived from the mantle, such as basalts, consume O2 when they weather. Oxygen also reacts with hydrogen and other gases released from volcanoes, hydrothermal vents and mineral reactions. Because the atmosphere is thin compared with the planet’s internal bulk, even small changes in the rates at which these rocks and gases consume O2 could have a big impact. Those changes might arise from alterations in the compositions of materials derived from the mantle, or in the rates at which they are brought to the surface or are dragged back down by the subduction of tectonic plates.

Many solid Earth scientists are unaware that the quest to understand the rise of O2 in Earth’s atmosphere can provide new impetus to investigations of fundamental aspects of the planet’s internal evolution.

As Earth cooled after its formation, mantle convection may have slowed. The abundance of iron and magnesium in magmas derived from the mantle decreased. The modern tectonic processes that recycle crust into the mantle kicked in. And the crust became richer in silicon dioxide (SiO2), and more buoyant3–5. The distribution of heat and elements in the mantle were altered as surface minerals were mixed in and as iron–nickel alloy was steadily lost to Earth’s growing core.

Such cascades of changes probably affected O2 at the surface. By the time of the Great Oxidation Event, the rate of O2 consumption by reaction with rocks and gases originating in Earth’s interior may have slowed enough that O2 produced by photosynthesis could accumulate in the atmosphere.

“Few scientists and engineers realize how deeply language affects their collaborations and research.”

None of these changes is well-quantified. For instance, whether the upper mantle’s capacity to consume O2 evolved or not is still debated. For 20 years, researchers thought that it did not. But recent measurements (some conducted by members of our team) of vanadium and scandium in ancient rocks derived from the mantle indicate that its O2 consumption capacity might have fallen in the 1.5-billion-year run-up to the Great Oxidation Event6, 7. Changes in the composition of the continental crust also suggest a decrease in O2 consumption by rock-weathering processes around the same time4.

Thus, unravelling the mystery of Earth’s O2 requires a quantitative theoretical model of the physics and chemistry of planetary cooling and its consequences for surface–interior interactions over time.

Such a model would have benefits beyond the geosciences. Astronomers are hoping to use O2 as a fingerprint of life on Earth-like exoplanets. But will O2 inevitably accumulate if biological processes produce it in large amounts? Stars have a wide range of abundances of elements such as carbon, magnesium and silicon. The exoplanets that form around them must vary in their compositions too, which would affect their tectonics and internal chemistry8. So, on some worlds, the rate of surface–interior interactions or the mantle’s capacity to consume O2 may be so high that the gas cannot accumulate. On such worlds, O2 may be useless as a signature of life.

Astronomers need to know which exoplanets are worth investigating intensely for O2, and for which this might be a waste of precious telescope time. A quantitative model that incorporates a wide range of planetary compositions would indicate which Earth-like planets have a chance of developing O2-rich atmospheres and which will never do so even if they are teeming with O2-producing life.

To bridge these disciplinary divides takes effective conversation. Yet few scientists and engineers realize how deeply language affects their collaborations and research. To close this gap, our team developed a research partnership with some social scientists and humanities scholars who work on communication and team dynamics. Research in their field shows how diverse teams work more effectively when they develop a shared language — common vocabulary, jargon, codes and linguistic styles as well as implicit understandings9, 10.

Our first step was to examine the language that our investigators used, to identify and confront gaps in our group’s understanding of concepts related to Earth’s oxygenation. We were motivated by a paradox that we observed: scientists in closely allied disciplines find it hardest to communicate effectively with one another. Astronomers, biologists and geoscientists are willing to ask each other ‘dumb’ questions that expose shared and divergent understanding. But a geobiologist working with a geophysicist might assume a shared understanding that does not exist.

“Scientists in closely allied disciplines find it hardest to speak to one another.”

For example, solid Earth scientists and geobiologists share the word ‘oxygenation’ but in fact lack a common language to describe the amount of O2 that is available to react. Geobiologists, used to high atmospheric levels, think in terms of O2 partial pressures and molarities when dissolved in solution, and so have developed a specialized vocabulary to describe environments with different amounts of free O2 (such as ‘oxic’, ‘anoxic’, ‘suboxic’ and ‘euxinic’). Solid Earth scientists use the physio-chemical term, ‘oxygen fugacity’, to reflect the fact that oxygen in the deep Earth is mainly locked in minerals and not in the form of an ideal gas. So conversation is stalled by even a seemingly simple question such as: ‘How can we compare a sediment’s capacity to consume O2 relative to the mantle?’.

Scholars who study how people share ideas have analytical skills and methods that can address this challenge. These begin with carrying out surveys and interviews, and designing visualizations to demonstrate differences in use of language and its impacts (see Supplementary Information).

Such data feed into analyses of social networks that help team leaders to identify and empower investigators most able to bridge subdisciplines — in our case, people who score highly on understanding both surface and deep Earth terms — or to identify people with hybrid knowledge who can address particular points of overlap. Because investigators are attuned mainly to their own group’s language, efforts must be made to help each group appreciate how their concepts relate to others’ and how each perspective informs the research questions pursued.

By gaining such awareness and working together more effectively, geoscientists studying Earth’s surface and interior, drawing on analyses of discourses and team dynamics, can build a model for the evolution of Earth’s O2 rise, better understand the history of Earth’s habitability, and inform the search for life on worlds beyond our own.