A survey of more than 1,000 UK-based university staff suggests that the country’s vote to leave the European Union could drive an academic exodus.

Forty-two per cent of lecturers and professors surveyed say they are more likely to consider leaving the UK higher-education sector as a result of the referendum outcome. The proportion was even greater (76%) among the non-UK EU citizens in the survey, commissioned by the University and College Union, which represents tens of thousands of academics and is based in London. 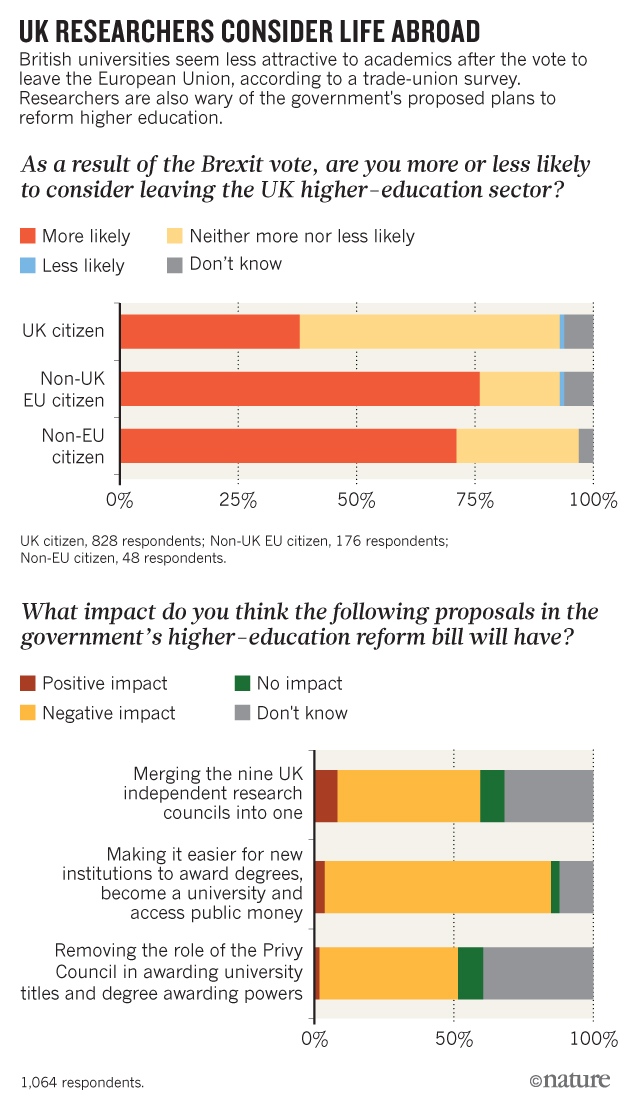 Many individual foreign researchers have said they feel less welcome in Britain after the Brexit vote, or that they now see better opportunities abroad. But the latest poll is one of the clearest indications of the widespread nature of this feeling in UK academia.

The survey also reveals huge opposition to the UK government’s controversial plans to reform higher education (HE) and research. More than half of academics think that the proposal to merge the nine UK research funding agencies into one body — currently being debated in Parliament — will have a negative impact. Just 9% think it would be a positive move. Even greater proportions think that there will be negative impacts from other changes, such as plans to make it easier for new universities to be set up.

“The level of concern amongst staff about the bill’s plans must be cause for alarm,” said Sally Hunt, the union’s general secretary, in a statement. “The government must focus its full attention on dealing with the impacts of Brexit and shelve the divisive HE bill.”

The footnote in the top panel of the graphic has been updated to show the unweighted, rather than weighted, sample sizes.