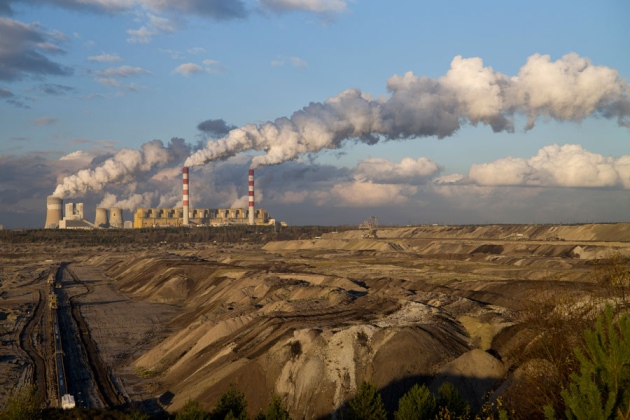 The Belchatow coal power plant in Poland: many eastern EU countries may be reluctant to take on extra emissions cuts after Brexit.

The European Union's climate-change agenda could lose momentum as a result of the bloc's split with the United Kingdom, policy experts say.

Wrangling over the terms of Brexit seems likely to delay the EU’s ratification of the Paris climate agreement, which aims to stabilize greenhouse-gas emissions, says Oliver Geden, head of the EU Research Division at the German Institute for International and Security Affairs in Berlin. “Brexit might be an excuse for some EU countries to withhold their signature,” he says.

And because the United Kingdom has long been a proponent of strong climate policies within the EU bloc, the departure could strengthen the position of European countries that are reluctant to take forceful climate action.

“The UK not being part of the negotiating mix means there is likely to be less pressure for ambitious targets and ensuring that the EU delivers on its Paris agreement commitments,” says Martin Nesbit, a policy expert at the Institute for European Environmental Policy in London.

Before the Paris talks, the EU had pledged to cut its greenhouse-gas emissions by at least 40% by 2030, relative to 1990 levels. As part of that pledge, industries participating in the EU’s emissions trading system were to reduce emissions by 43%, and other sectors — such as transport, agriculture and construction — were to achieve a 30% cut (both relative to 2005 levels).

The latter target is most exposed to Brexit. Last week, the European Commission proposed the amount by which each of its 28 member states — including the United Kingdom — should cut 2005 emissions domestically by 2030, depending on individual states’ economic strength and potential to reduce emissions. The proposals, which member states and the European parliament are yet to approve, range from 0% for Bulgaria to 40% for Luxembourg and Sweden.

The United Kingdom has been given a 37% reduction target; once it quits the EU, its extra 7% will have to be divided between the remaining countries to keep the bloc on track. Equivalent to some 29 million tonnes of carbon dioxide, or less than one percentage point for each country’s target, according to an analysis by the London-based climate watchdog group Carbon Brief, that is not a large amount. But the political wrangling over how to fairly share out the post-Brexit burden between EU member states will inevitably delay the bloc’s ratification of Paris, says Geden. Eastern European countries, including Poland, the Czech Republic, Hungary and Slovakia, whose energy systems rely heavily on coal, will be reluctant to take on any extra emission cuts, he adds.

A delay is unlikely to jeopardize the progress of the landmark Paris agreement, however. It will come into effect when 55 countries, accounting for at least 55% of the world’s greenhouse-gas emissions, have ratified it. (So far, 20 countries — none of them large economies or EU members — have done so.)  And it is unlikely to derail the growing momentum behind global action on climate. But it makes it more likely that the centre of gravity of global climate efforts will shift to China and the United States, which both aim to ratify the Paris deal before the end of the year.

And until the EU ratifies the Paris agreement, it will have little say on its policy details, says Geden. “For the EU as a whole, which has long claimed leadership in international climate policies, delayed ratification of that treaty it has so vehemently advocated would be quite a disaster," he says.

“Much depends on the outcome of forthcoming negotiations,” adds Sebastian Oberthür, a climate-policy researcher at the Free University of Brussels. “But Brexit will certainly not make things any easier.”

Brexit uncertainty also looms over other key EU legislation related to climate and energy — in part, because the level of UK participation in the lawmaking process is unclear. In the second half of 2016, member states aim to finalize the long-planned reform of the EU emissions trading system and to adopt a new directive on renewable energy. The bloc’s upcoming agenda also includes debating how to overcome barriers to the bloc's "energy union", the EU-wide single market for electricity, in which the United Kingdom may wish to remain to maintain its energy security.

As long as the nation has not formally declared its exit, EU policymaking will continue under the premise that any legislation is applicable to it.  But experts reckon that the United Kingdom’s political influence in Brussels, on environmental policies and beyond, will rapidly fade. That means that it may become easier for the EU to adopt environmental policies unloved in Britain, says Nesbit — such as emission taxes and stricter fishing quotas.

The UK government said last week that it will not take up its scheduled presidency of the EU in the second half of 2017, focusing instead on its preparations for Brexit. The United Kingdom, says Nesbit, will have “zero to negative” influence on the outcome of EU policy negotiations in the next couple of years.