If electric vehicles are ever going to match the range of cars that run on fossil fuels, their batteries will need to store a lot more energy. Lithium–air (or lithium–oxygen) batteries are among the best candidates, but have been held back by serious obstacles. But a more durable design unveiled by chemists at the University of Cambridge, UK, offers promise that these problems can be overcome.

The batteries devised by Clare Grey at Cambridge and her co-workers are small laboratory prototypes — a long way from a car battery pack — but their innovative combination of materials “addresses several major problems with the lithium–oxygen technology”, says Yury Gogotsi, a materials chemist at Drexel University in Philadelphia, Pennsylvania.

The work, reported today in Science1, “certainly looks interesting”, Gogotsi says, but he cautions that “it is still just good science — lab work on a small cell”, and not yet close to a marketable technology.

Lithium–air batteries, also known as breathing batteries, harness the energy produced when lithium metal reacts with oxygen from the air. Because they do not have to carry around one of their main ingredients (oxygen), and because lithium metal has a low density, they can — in theory — store as much energy per kilogram as a petrol engine. That means that the batteries might stuff in energy ten times more densely than the best battery packs in current electric cars, which researchers hope might let vehicles travel as far as 800 kilometres before they need recharging2.

Despite this promise, some chemists have abandoned hope of getting breathing batteries to work. “Although the lithium–air battery has a high theoretical energy-storage capacity, in practice it is very difficult to achieve,” admits Grey. The main problem is that chemical reactions produce unwanted side products that clog the electrodes, destroy the battery materials or short-circuit the device. As a result, the batteries typically fail after a few dozen charge–discharge cycles3.

But Grey and her team have introduced a bundle of innovations that make their design more durable.

In the team’s prototype, the electrolyte is an organic solvent called dimethoxyethane, mixed with the salt lithium iodide. With these ingredients, when the ions react with oxygen at the cathode, they produce crystals of lithium hydroxide. Many earlier battery designs instead produced lithium peroxide, a white solid that built up on the electrode and was hard to remove during battery recharge. Lithium hydroxide, by contrast, decomposes readily when the battery is recharged. 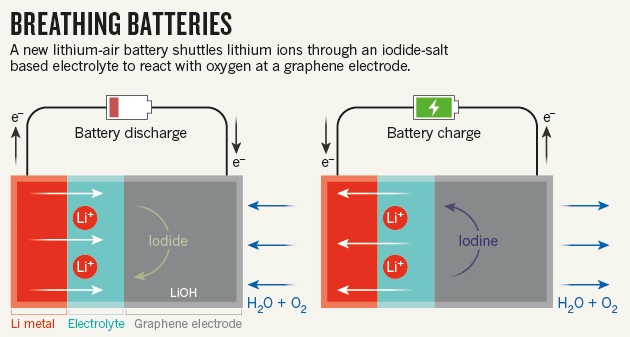 One problem with some earlier designs was that the highly reactive lithium metal reacted with and destroyed the electrolyte, and the products of that reaction coated and inactivated the lithium anode. That does not seem to happen with Grey’s battery. As a result, says Grey, the cells work for hundreds of cycles, with only a slight decrease in performance. She estimates that her team’s cells could store at least five times more energy per kilogram than the lithium-ion batteries used in some of today’s electric cars — such as those made by Tesla Motors of Palo Alto, California.

Another innovation of the cells is the material used for the cathode. Many previous lithium–air batteries have used various forms of porous carbon, but those made by Grey and her colleagues contain a relatively new variant, called reduced graphene oxide: sheets of pure carbon one atom thick, stripped from graphite with the help of a chemical process of oxidation and then ‘reduced’ back to carbon in a highly porous form.

“Reduced graphene oxide electrodes are resilient,” says Gogotsi, which probably contributes to the battery’s good performance over many charge–discharge cycles. However, he adds, “there is no reason to believe that the ideal electrode architecture has yet been found”.

“As far as I’m aware, this is the first time this particular combination of materials has been studied,” says Jake Christensen, a lithium–air battery specialist with the Bosch Research and Technology Center in Palo Alto. But he points to several problems for commercialization. In particular, the battery delivers current at densities some 20–50 times lower than a car would need, he says. “Our best performances are obtained with very low current densities,” Grey admits, “so we are very far off the numbers needed for a car battery.” If it can be made to work, the technology's first use would likely be as rechargeable batteries that aren't intended for battery packs in cars, she adds.