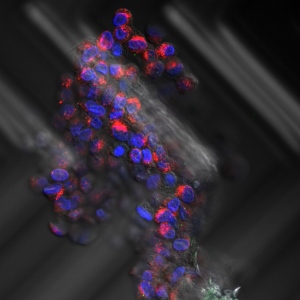 Some of these circulating cells from a breast cancer patient have transitioned from their original cell type (epithelial, green) to a type that enables the disease to spread into metastases (mesenchymal, red).

An analysis of breast cancer cells captured as they escape from primary tumours has provided the best clinical evidence to date in favour of a popular theory of cancer metastasis.

The work, published this week in Science1, also unveils an improved method for plucking tumour cells from blood, a technique that may one day allow physicians and researchers to track the spread of cancer without resorting to invasive biopsies.

“It’s very exciting,” says Caroline Dive, a Cancer Research UK researcher at the University of Manchester. “It’s paving the way for an explosion of studies looking at these circulating tumour cells.”

Current cancer treatments typically target tumour growth, but it is metastasis — the spread of the cells to other tissues — that most often proves fatal. Before drug developers can produce therapies that halt the spread of cancer, however, they first need to understand how cells break free from a tumour, enter the bloodstream and colonize new tissue.

A long and winding road

How cancers cells make that journey has long puzzled researchers: the cells that make up cancers in epithelial tissue, such as the surface cells of the lung and breast, generally prefer to stick together and are not suited for a rough-and-tumble trip through the bloodstream. One theory holds that metastasizing tumour cells activate pathways that are normally reserved for ‘mesenchymal’ cells, which move around in developing embryos2. This has been termed the epithelial–mesenchymal transition, or EMT, and some companies have been hard at work developing drugs that target this switch.

But most of evidence supporting a role for the EMT in cancer spread has come from animal models. And analyses of tumour cells circulating in the blood has been limited because the techniques tend to pick up only epithelial cells. “It was pioneering technology, but we’ve always been worried that if EMT was happening, we’d miss the mesenchymal tumour cells this way,” says Dive.

Daniel Haber and Shyamala Maheswaran, both at the Massachusetts General Hospital Cancer Center in Boston, and their colleagues, therefore developed a new suite of markers to identify tumour cells circulating in the blood. They then tracked these cells, and characterized their gene expression, in 11 people undergoing chemotherapy for breast cancer.

The team found that when tumours responded to treatment, the proportion of circulating tumour cells harbouring mesenchymal features began to drop. Failure of therapy was followed by resurgence of mesenchymal tumour cells.

The team now plans to repeat the study in more patients and tumour types, says Haber. If the results hold up, they could provide drug developers with a list of new targets, says Klaus Pantel, a cancer researcher at the University Medical Centre Hamburg-Eppendorf in Germany.

Pantel also notes that many of the circulating tumour cells had features of both mesenchymal and epithelial cells. That means the hunt may have to be re-focussed on an intermediate cell type, he says. “The cells that have gone all the way into a mesenchymal state may not be the bad guys after all."