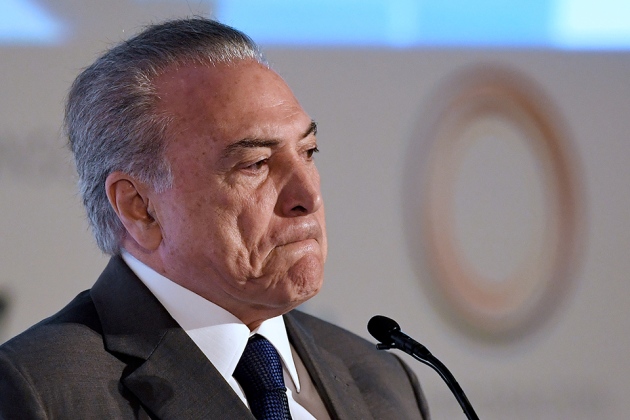 Brazilian scientists have been left horrified by a 44% slash to the federal science budget, announced by the country's government on 30 March.

This will leave the Ministry of Science,Technology, Innovations and Communications (MCTIC) with its lowest budget in at least 12 years at just 2.8 billion reais, equivalent to US$898 million — a 2.2 billion reais cut from the 5 billion reais of funding that the government had originally proposed for 2017 (see ‘Drastic cuts’).

The cut is part of a general trimming of 42 billion reais from the federal budget, which amounts to 28% over all government departments — so the cut to science is particularly severe. President Michel Temer says the measure was a tough but necessary response to Brazil’s escalating fiscal deficit. The country faces the worst recession in its history, and recovery has been much slower than expected: gross domestic product growth predictions for 2017 were revised down from 1.4% to 0.5% last month.

Researchers argue that science has already taken too heavy a toll from the economic crisis. Since 2014, a series of funding cutbacks has meant abandoning a flagship exchange programme to enable Brazilian students to visit leading institutions abroad, and major projects — such as the Sirius synchrotron, a 1.75 billion reais machine — have been put in jeopardy. The number of research papers published in Brazil is also declining, according to one preliminary estimate from 2016.

Adding to those woes, Temer demoted the science ministry as he took office in May 2016 and fused it with the communications ministry. And a constitutional amendment passed by the new government has capped federal spending to inflation-level rises for 20 years, killing hopes that the tide may turn any time soon.

The new budget is “an atomic bomb strike on Brazilian science”, says physicist Luiz Davidovich, president of the Brazilian Academy of Sciences. He warns that the cuts will cripple research and development for decades to come. “Were we at war, one could think this was a strategy by a foreign power to destroy our country. But instead it’s us doing this to ourselves.”

Sidarta Ribeiro, head of the Brain Institute at the Federal University of Rio Grande do Norte in Natal, Brazil, holds a similar apocalyptic view, saying: “This is an act of war against the future of Brazil. Scientists will flee the country.” He cites the case of Suzana Herculano-Houzel, a renowned neuroscientist who shut down her laboratory in 2016 and left Brazil for the United States. “If I hadn’t foreign money for research I’d be shutting down myself," he adds. 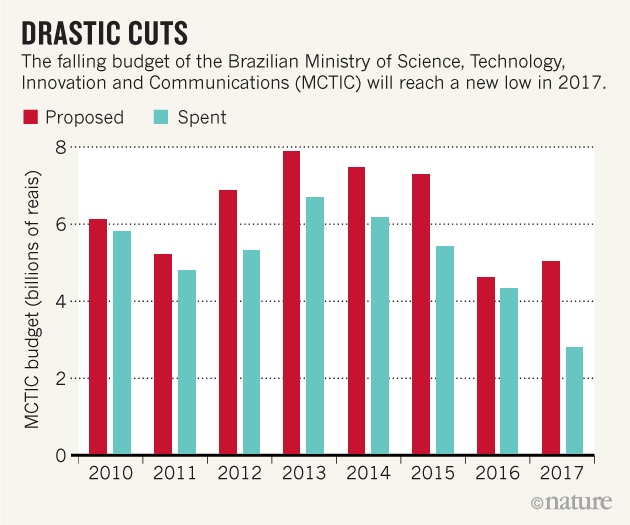 Fernando Peregrino, president of CONFIES, the Brazilian association of science funding agencies and university foundations, agrees. “There will be a huge break-up of teams which will be hard to rebuild,” he says. “We’ve climbed another step down.”

Scientists were concerned about funding before the announcement. Davidovich and Helena Nader, president of the Brazilian Society for the Advancement of Science (SBPC), pre-emptively wrote letters to Temer and to Henrique Meirelles, the minister of finance, warning of the impact of a potential cut on an already tight science budget. “The government has acted without listening to the State. It shows an utter shortsightedness,” Nader says.

The MCTIC told Nature that it has already started to gauge the full impact of the cuts. According to the ministry, actions to mitigate them will be announced shortly.

Ribeiro says the drastic cutbacks may have one silver lining: they may fuel the 22 April March for Science in Brazil. The SBPC formally joined this month’s march, inspired by the Trump-resistance movement in the United States, and has been calling on scientists all around Brazil to join. “We need to paint for war and occupy public spaces,” says Ribeiro. “Respectfully, but consistently.”