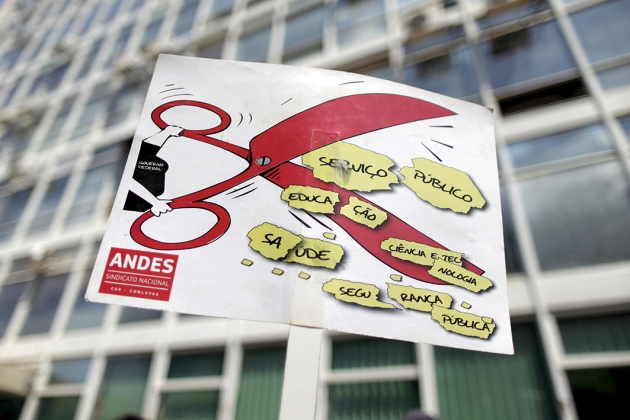 Proposed cuts to government spending have provoked demonstrations in Brasilia.

For a decade, biochemist Octavio Franco has watched Brazil’s economy boom and its research investment surge. “We’re starting to do really high-quality science,” he says. But as the nation’s economy stalls, Franco is one of many who fear that this budding research ecosysytem is in jeopardy.

In 2013, growth decelerated in what was once one of the fastest-growing economies in the world; in 2014, it all but stopped. Over the past year, the resulting cuts to federal and state science funding have paralysed research, says João Calixto, a biomedical scientist at the Federal University of Santa Catarina. “2015 has been a big mess,” agrees Franco, whose two labs at the Catholic University of Brasilia and the Catholic University of Dom Bosco in Campo Grande together employ almost 100 researchers. Although his labs have won 11 grants for 2015, they have received cash for just 2 of them.

The 2016 budget proposal, which Brazil’s President Dilma Rousseff presented to Congress in September, only worsens the situation. It requests 24% less for the federal Ministry of Science, Technology and Innovation (MCTI) than did the 2015 proposal (see ‘Federal funding woes’), and freezes new scholarships in a flagship exchange programme, Science Without Borders. The programme is close to meeting its goal of sending 101,000 Brazilian undergraduate and postgraduate students to top institutions abroad by the end of 2015, and aims to send a further 100,000 by 2018.

Federal science felt the squeeze in May, when Rousseff’s administration chopped the MCTI’s budget by almost 2 billion reais (US$500 million), or some 25% (the ministry’s spending limit has since shrunk further). Although the MCTI says that it is maintaining existing grants and fellowships, it dropped some regular calls for research proposals and is creating few new programmes. This year, there will be no ‘universal call’ from the National Council for Scientific and Technological Development (CNPq), a R$200-million funding stream that last year was allocated to more than 5,000 projects. Junior postdoctoral fellowships part-funded by the CNPq seem to have been frozen from September too, says Franco. 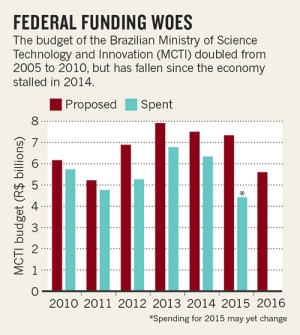 Institutions are struggling to keep their labs going, says Cassio Leandro Barbosa, an astronomer formerly at the University of Paraíba Valley in São Paulo state. A 75% cut to a Ministry of Education graduate programme is making it tough to buy equipment, keep laboratories working and pay travel expenses for field research and meetings. “Some federal institutes don’t have funds enough to pay the basics, like electric bills and cleaning,” he says. The depreciation of the real has hiked the price of imports, including supplies, reagents and equipment. And promised government payments have been delayed. “Some institutions may not have received 50% of their funding yet,” adds Barbosa.

Most foreign conference trips have been cancelled, says Vasco Azevedo, a geneticist at the Federal University of Minas Gerais in Belo Horizonte. And attendance at the Brazilian Society of Genetics annual meeting in Águas de Lindóia, São Paulo, this month —usually a lively gathering of 3,000 people — was down to less than half its usual level, he estimates. The funding situation also means that Brazil is unlikely to formally join the European Southern Observatory any time soon, Barbosa says, despite its Congress finally ratifying a 2010 agreement earlier this year.

State budgets — an increasingly important source of science funding in Brazil — are feeling the pinch as well. Most states’ research funds come from a constitutionally mandated percentage of state revenues, which together amount to billions of reais each year. But many of the smaller, newer state agencies — which often rely on partnerships with embattled federal agencies — are reducing or postponing programmes, some by as much as 50%, says Sergio Gargioni, president of CONFAP, the umbrella organization for state funding agencies, based in Brasilia.

Larger states are not immune. Rio de Janeiro’s funding agency, which has seen its annual budget treble since 2006 to R$450 million, has received less than 60% of its promised allocation so far this year, says Jerson Lima Silva, the agency’s scientific director. And although Brazil’s largest and most power­ful state funding agency, the São Paulo Research Foundation (FAPESP), has received all of its mandated funds and has an endowment large enough to cover any shortfalls, it is still feeling the bite of shrinking state revenues and the poor exchange rate, says its scientific director, Carlos Henrique de Brito Cruz.

“We need to do everything we can to save Brazilian science.”

In an effort to revive science spending, science minister Aldo Rebelo is seeking a US$2-billion loan from the Inter-Ameri­can Development Bank, headquartered in Washington DC. Among other things, this will help to pay for planned National Science and Technology Institutes. Press reports suggest that the bank has agreed to this, but the MCTI told Nature that the deal requires approval from other government ministries and the Senate.

In a statement, a spokesman for the ministry said that Rebelo is also negotiating with the government to secure some of the 50% of oil-revenue funds for science that have yet to be allocated. “The MCTI has taken action in order to restore the budget and is seeking new sources of funding for the science and technology system,” he said. For example, despite September cuts of R$3.8 billion to a separate government fund called the Growth Acceleration Programme, Rebelo has secured funding for two cutting-edge science facilities that it was to have supported: a synchrotron light source set to come online in 2016 and a research nuclear-reactor facility due to open in 2018.

But with Brazil’s economy showing no signs of recovery, many fear that the worst is yet to come. After further cuts were announced on 14 September, reports emerged that the government wants to merge the CNPq with CAPES, the Brazilian Federal Agency for the Support and Evaluation of Graduate Education, which is funded by the education ministry. The Brazilian Academy of Sciences and the Brazilian Society for the Advancement of Science, among others, came out strongly against such a move in a letter to the president, citing the agencies’ “clear and complementary missions”. And Gargioni thinks that the crisis could continue for years. “The situation is so black,” says Azevedo. “We had very good graduate programmes and science, and now we will be back to 20 years ago. We need to do every­thing we can to save Brazilian science.”