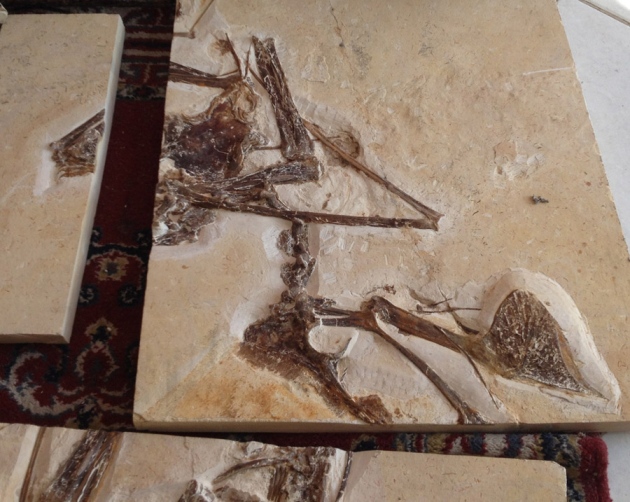 Rare fossils, such as this pterosaur from Brazil’s Araripe Basin, are regularly seized by authorities.

Thirteen people are scheduled to go on trial in Brazil for smuggling fossils out of the country, apparently to private collectors and to museums in Germany and the United Kingdom.

The arrests, which followed the seizure of around 1,000 fossils by French authorities in October, are part of a growing effort by Brazilian authorities to crack down on illegal fossil trading. Although the police have not released the names of the accused, authorities say that one, a German national, works for palaeontological museums in the United States, Europe and China. If convicted, some of the individuals face a maximum of 20 years in jail.

The case, which is still awaiting a trial date, has reopened the debate about the fossil trade, and whether science in developing countries benefits from protectionist policies.

In Brazil, it is illegal for anyone not affiliated with a national or state research institution to dig for fossils without authorization from the Brazilian National Department of Mineral Production (DNPM). The law dates back to 1942, but official permits are rarely given out. Brazil’s constitution also says that fossils found in the country are the property of the state, making their sale or export without permission illegal. “Despite this, people are taking fossils out of the country in tonnes per month,” says Max Langer, president of the Brazilian Society of Palaeontology.

The fossil-rich Araripe Basin in northeastern Brazil has long been a source of black-market specimens. Langer says that he is not aware of the DNPM ever granting a licence to foreign collectors there, meaning that most Araripe fossils now abroad were obtained illegally.

Many Brazilian palaeontologists broadly support the law. They argue that keeping fossils in the country preserves cultural heritage and helps to develop Brazil’s palaeontological expertise. Illegal collecting also damages specimens and prevents the acquisition of contextual field data, some say.

But the crackdown is worrying some palaeontologists outside Brazil, who say that the laws hamper science. “Scientists who just want to go about doing science are frustrated,” says David Martill, a palaeontologist at the University of Portsmouth, UK.

The enforcement has been driven by Brazil’s growing economy and strength in palaeontology, as well as an increasing public awareness of fossil sales and loss of cultural heritage, says Alexander Kellner, a palaeontologist at the National Museum of Brazil, part of the Federal University of Rio de Janeiro. Authorities, for example, were quick to act last month when the online auction site eBay listed a Brazilian pterosaur for sale at US$262,000. The auction, by French company Geofossiles, closed without sale, and Brazilian and international police are reportedly investigating the case. Brazil could ask France to repatriate the fossil if authorities can prove that it was found in the country.

Researchers say that the loss of fossils has seriously harmed Brazilian science. For instance, in findings presented at the 7th Brazilian Symposium of Vertebrate Palaeontology in 2010, Marcos Sales, a palaeontologist at the Federal University of Rio Grande do Sul in Porto Alegre, found that 14 of the 24 reference specimens, or holotypes, of pterosaur fossils collected in the Araripe Basin were housed by foreign institutions.

The issue is not unique to Brazil. Other countries that list fossils as national property and prohibit their export, such as China, Mongolia and Morocco, are increasingly enforcing their own laws. In 2012, for example, Mongolia successfully fought for the return of a 7.3-metre-long tarbosaur fossil, which had been illegally exported to the United States and sold there for more than $1 million.

But critics such as Martill argue that criminalizing the fossil trade merely sends it underground. Crackdowns cut the supply line because informal diggers, such as quarry workers, fear arrest. Knowing “dodgy” people is the only way to get samples, says Martill, because the DNPM ignores requests to dig. He adds that palaeontology needs commercial trade because without it there is little excavation.

David Unwin, a palaeobiologist at the University of Leicester, UK, says that certain fossils are so abundant that there is no harm done if some are taken abroad. He also notes that the cost of preparing and displaying fossils is very high. “If a country is relatively poor and cannot afford those kinds of things, it is perhaps better that those fossils go somewhere else,” he says. Langer calls this a “very first-world view”.

Kellner admits that the Brazilian law is not perfect. He was a victim of it in 2012, when he was arrested while transporting fossils within Brazil, although the charges were dropped. He still supports the law, but says that the government’s crackdown must be accompanied by a drive to give Brazilian palaeontologists the funding to collect fossils. Others say that the DNPM lacks the resources to enforce the law.

Langer feels that fossils must be kept in the country to help to improve Brazilian science. And he expects fellow researchers to hold Brazil’s laws in higher regard than the private collectors who also fuel the trade. “Foreign researchers know it’s illegal. They could work here in Brazil with Brazilian partners, but they choose not to,” he says.