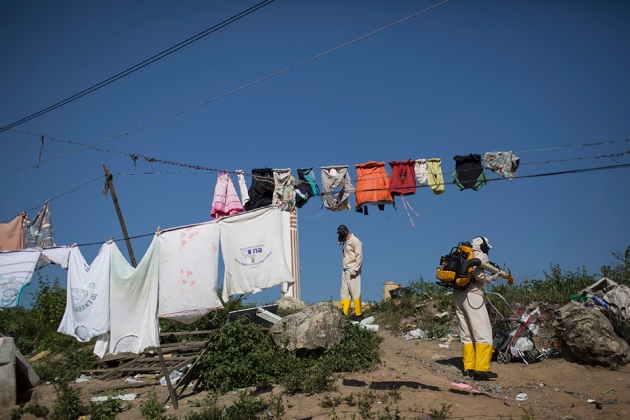 Zika virus has spread throughout Brazil, but extremely high rates of microcephaly have been reported only in the country's northeast. Although evidence suggests that Zika can cause microcephaly, the clustering pattern hints that other environmental, socio-economic or biological factors could be at play.

“We suspect that something more than Zika virus is causing the high intensity and severity of cases,” says Fatima Marinho, director of information and health analysis at Brazil’s ministry of health. If that turns out to be true, it could change researchers' assessment of the risk that Zika poses to pregnant women and their children.

The idea has long been on Brazilian researchers' radar. "This is being discussed in almost every scientific meeting,"  says Lavinia Schüler-Faccini, a researcher at the Federal University of Rio Grande do Sul. But the enquiry marks the first time that scientists at the health ministry have taken up the hypothesis.

The ministry has asked Oliver Brady, an epidemiologist at the London School of Hygiene & Tropical Medicine, and Simon Hay, director of geospatial science at the Institute for Health Metrics and Evaluation in Seattle, Washington, to collaborate with researchers in Brazil. “The aim is to understand why we are only observing elevated rates in the northeast,” says Brady, who flew into Brasilia this month to begin work.

"I think they may be on to something," says Linda Birnbaum, director of the US National Institute of Environmental Health Sciences (NIEHS). Zika was discovered in 1947 and hadn’t been implicated in birth defects until now; and current strains of the virus don’t show any significant mutations that might have increased its virulence. "So why now?" she asks.

The northeast was where the first reported surge in microcephaly cases in Brazil began a year ago. Health officials had expected that they would later see the same high rates in other parts of the country. "We were expecting an explosion of birth defects," says Marinho.

But as of 20 July, almost 90% of the 1,709 confirmed cases of congenital microcephaly or birth defects of the central nervous system reported in Brazil since last November were in a relatively small area: in the coastal hinterland of the country's northeastern tip. The affected area is about the size of the United Kingdom, whereas Brazil is almost as large as the United States.

What's particularly surprising, says Marinho, is that just three cases have been confirmed in Brazil’s second-most populous state, Minas Gerais, which borders the most-affected part of the northeast region. Poor data on the scale and timing of Zika outbreaks across Brazil make it difficult to tell whether large increases in microcephaly elsewhere might simply have been delayed — but ministry scientists now think that the northeast represents a marked outlier, she says.

Other factors at play?

There are many hypotheses about what might be going on. Marinho says that her team's data, submitted for publication, hint that socio-economic factors might be involved. For example, the majority of women who have had babies with microcephaly have been young, single, black, poor and tend to live in small cities or on the outskirts of big ones, she says.

Another idea is that co-infections of Zika and other viruses, such as dengue and chikungunya, might be interacting to cause the high intensity of birth defects in the area.

A third possibility was put forward in a paper published last month1, in which researchers from Brazilian labs noted a correlation between low vaccination rates for yellow fever and the microcephaly clusters. Because yellow fever and Zika are in the same virus family — they are both flaviviruses — the scientists speculated that the vaccine might provide some protection against Zika. "It is a plausible hypothesis," says Duane Gubler, who studies mosquito-borne diseases at Duke–NUS Medical School in Singapore. Marinho, however, is sceptical — arguing that there are many areas with low yellow fever vaccination rates that haven't had many confirmed microcephaly cases.

The Brazilian doctor who was the first to report a firm link between Zika and microcephaly — Adriana Melo at IPESQ, a research institute in Campina Grande — is also among those who have suggested that other factors could be involved. In a preprint posted on the bioRxiv server on 15 July2, Melo and her colleagues at the Federal University of Rio de Janeiro reported that they had found bovine viral diarrhoea virus (BVDV) proteins in the brains of three fetuses with microcephaly from Paraíba state. The brains tested positive for Zika RNA, but the researchers found no Zika proteins.

BVDV causes serious birth defects in cattle but is not known to infect people. Melo and her team suggest that Zika infection might reduce physiological barriers, making it easier for BVDV to cause infections. But they haven't ruled out the possibility, raised by other researchers, that their findings might be due to contamination (BVDV is a common contaminant of fetal bovine serum and other bovine-derived lab reagents).

The Brazilian health ministry’s study will test for BVDV among other ideas, says Brady. Researchers will reanalyse raw data on microcephaly cases, and will model connections with possible cofactors such as socio-economic status, water contamination and mosquito-borne diseases. Most of this information will come from health-ministry databases, but the team will also study experimental data, such as how people's immune response may change after past infection with other viruses such as dengue.

But researchers say that the information they have may not be enough to pin down whether factors in addition to Zika are involved. Much of the microcephaly raw data comes from routine hospital reports, which are often incomplete. And lab tests to confirm Zika infection are rarely carried out.

Ultimately, researchers and public-health officials might have to wait for higher-quality data from research programmes such as the Zika in Infants and Pregnancy Study, which launched last month in Puerto Rico and aims to monitor as many as 10,000 pregnant women. The US National Institutes of Health (including Birnbaum’s NIEHS) and the Oswaldo Cruz Foundation in Brazil are doing the work, which will also include testing whether nutritional, socio-economic and environmental factors have a role. The study will expand to Brazil, Colombia and other Zika-affected areas.

Until more is known about Zika and the causes of increased microcephaly rates in Brazil’s northeast, public-health actions and advice must err on the side of precaution, says Ian Lipkin, a virologist and outbreak specialist at Columbia University in New York City.