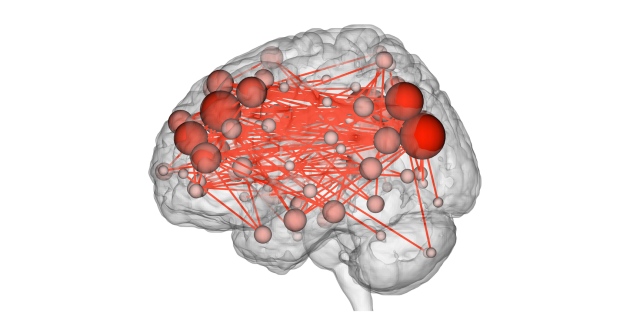 Patterns of neural circuitry in the brain's frontal and parietal lobes can be used to distinguish individuals on the basis of their brain scans.

Our brains are wired in such distinctive ways that an individual can be identified on the basis of brain-scan images alone, neuroscientists report.

In a study published in Nature Neuroscience1 on 12 October, researchers studied scans of brain activity in 126 adults who had been asked to perform various cognitive tasks, such as memory and language tests. The data were gathered by the Human Connectome Project, a US$40-million international effort that aims to map out the highways of neural brain activity in 1200 people.

To study connectivity patterns, researchers divided the brain scans into 268 regions or nodes (each about two centimetres cubed and comprising hundreds of millions of neurons). They looked at areas that showed synchronized activity, rather like discerning which instruments are playing together in a 268-piece orchestra, says Emily Finn, a co-author of the study and a neuroscience PhD student at Yale University in New Haven, Connecticut.

In some regions of the brain — such as those that involve networks controlling basic vision and motor skills — most people’s neural circuitry connects up in similar ways, the team found. But patterns of connectivity in other brain regions, such as the frontal lobes, seem to differ between individuals. The researchers were able to match the scan of a given individual's brain activity during one imaging session to the same person’s brain scan taken at another time — even when that person was engaged in a different task in each session.

“Until this, we really didn’t know the extent to which each unique individual has a unique pattern of connectivity,” says cognitive neuroscientist Russell Poldrack at Stanford University in California.

The variations in connectivity patterns also correlate with a person’s performance on an intelligence test, the researchers say. That does not mean that a person’s smarts can be deduced from a brain scan, but “the uniqueness seems to be tied to cognitive function in some way,” says Poldrack. In particular, people with stronger connections within and between their prefrontal and parietal lobes (which are usually particularly active when people are performing a demanding cognitive task) scored more highly on the test, notes Finn.

The neural fingerprint is not a perfectly reliable signature. A scan of the circuitry of the frontal, parietal and temporal lobes, for example, taken of a person lying at rest in a magnetic resonance imaging machine on one day, could be used with 98–99% accuracy to pick out a brain scan of the same person — again at rest — on another day. But the predictive accuracy dropped to 80–90% when that person was performing a different cognitive task during the second session.

Finn thinks that knowledge of an individual’s brain circuitry might one day help clinicians to tailor therapies to specific patients. “We have hundreds of drugs for treating neuropsychiatric illness, but there’s still a lot of trial and error and failed treatments,” she says. “This might be another tool.”

But there is still a lot to learn about how the underlying physical structures of the brain differ from one individual to the next, says neuroscientist Jeff Lichtman of Harvard University in Cambridge, Massachusetts. To take the orchestral analogy, researchers may be able to see that drums and violins tend to play together, but no one yet knows why the orchestra plays this way, or understands the source of the instructions to play loudly, softly or not at all.

“The real question here is, why?” says Lichtman. “What is the physical underpinning of this variation? Inquiring minds want to know.”