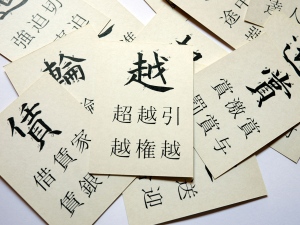 Learning to read Chinese might seem daunting to Westerners used to an alphabetic script, but brain scans of French and Chinese native speakers show that people harness the same brain centres for reading across cultures. The findings are published today in the Proceedings of the National Academy of Sciences1.

Reading involves two neural systems: one that recognizes the shape of the word and a second that asseses the physical movements used to make the marks on a page, says study leader Stanislas Dehaene, a cognitive neuroscientist the National Institute of Health and Medical Research in Gif-sur-Yvette, France.

But it has been unclear whether the brain networks responsible for reading are universal or culturally distinct. Previous studies have suggested that alphabetic writing systems (such as French) and logographic ones (such as Chinese, in which single characters represent entire words) writing systems might engage different networks in the brain.

To explore this question, Dehaene and his colleagues used functional magnetic resonance imaging to examine brain activity in Chinese and French people while they read their native languages.

The researchers found that both Chinese and French people use the visual and gestural systems while reading their native language, but with different emphases that reflect the different demands of each language.

“Rather than focusing on ear and eye in reading, the authors rightly point out that hand and eye are critical players,” says Uta Frith, a cognitive neuroscientist at University College London. “This could lead into novel directions — for instance, it might provide answers why many people with dyslexia also have very poor handwriting and not just poor spelling.”

Understanding how the brain decodes symbols during reading — using both visual and motor centres — might also inform learning strategies for general literacy, and ways to attune them to children or adults.

There is evidence2, 3 that for all languages, reading activates a shape-recognition region in the brain’s posterior left hemisphere — the visual word-forming area (VWFA). But some research5 has indicated that readers of Chinese — which places great emphasis on the order and direction of writing strokes — also use other brain networks involved in the motor skills that are engaged for writing.

Motor processing is universally used for writing and involves4 a brain region known as Exner’s area. The researchers postulated that this region is also activated in reading to interpret the gestures assumed to have gone into making the marks.

To try to isolate the different brain regions involved in reading, Dehaene and his colleagues measured Chinese and French readers' response times in recognizing words on a screen. But unbeknown to the subjects, their responses were being subtly manipulated by a process called priming, in which other words or word-like symbols appear for just 50 milliseconds before the target word is shown — too briefly for the subjects to register the ‘primes’ consciously.

The researchers found that both the VWFA and Exner’s area were indeed activated in French and Chinese subjects. But there were cultural differences: for example, the effects of gestural direction were stronger for the Chinese.

Frith says that harnessing the gestural system more in education might help young children with reading. “So far the motor decoding side has been rather neglected in reading education,” she says.